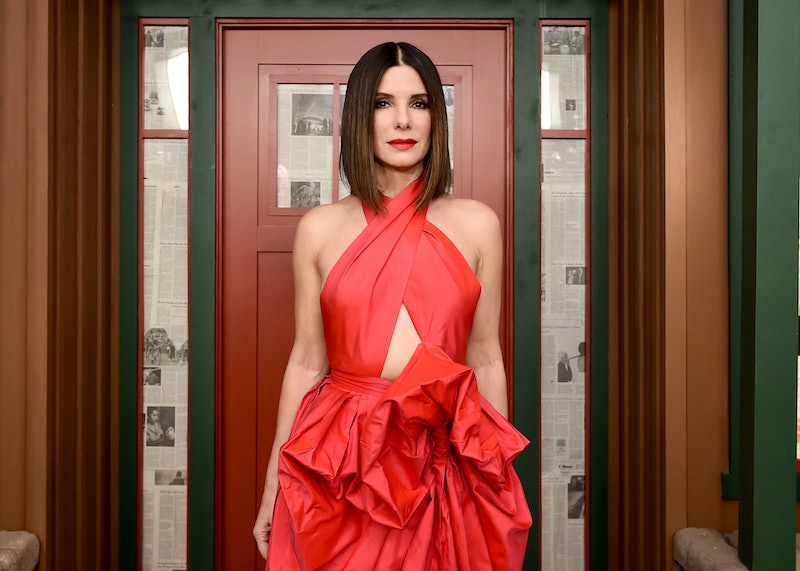 Before Sandra Bullock was a rom-com queen, she was just a college co-ed with a Hollywood dream. It's why Bullock's new Amazon TV series will be inspired by her college years with some help from John Legend. According to Variety, this new musical series, loosely inspired by Bullock's own life will be a "dramedy set in the world of music and dance," which sounds like a pitch perfect description for those that yes, love Pitch Perfect and Fame, but also Dawson's Creek.

Variety reported that the series, which is currently untitled, "will take place in the American Deep South in the 1980s, where one darkly off-beat young woman defies expectations and sets out in search of love, community, and an identity of her own.”

The idea for the show apparently came from conversations Bullock had with the show's co-executive producer and her friend Akiva Goldsman, according to Variety. Bullock must have had some wild stories from her college days to illicit this kind of response and everyone should be excited to see these tales come to life on the small screen.

Legend will co-executive produce the series with Bullock, which only makes this show more appealing. In fact, it's not even here yet, and the series already has a fan in Kevin Williamson, the writer behind Dawson's Creek and Scream. Fun fact: Williamson actually crossed paths with Bullock during her college years at East Carolina University in North Carolina from 1982 to 1986. "First gay bar I ever entered was freshman year and Sandra was performing!" Williamson tweeted on June 10 after the news of the Amazon series broke. "Can't wait for this!"

K.C. Perry, who worked on The Originals, will write and executive produce the Bullock-inspired series. No word yet on who will get to play a young Sandy Bullock, but it's safe to say those are going to be some hard dance shoes to fill. Here's to hoping whoever dares to put them on will be dancing to some original music from Legend, as there has been no official announcement on whether Legend will have any part in the musical direction of the show.

For right now, there aren't many specifics for this project, which is still in development. As for the kinds of stories the Amazon dramedy might tell, though, look no further than what Bullock, an Arlington, Virginia, native who spent much of her life in German and Austria thanks to her military dad, has said about her college days in the past. Specifically, about how Bullock made money during her time at school.

Last year, during a game of “Burning Questions” on The Ellen DeGeneres Show, Bullock revealed the "weirdest thing" she ever did to make money. “I used to open up for drag queens in North Carolina by dancing," she said. “You were the precursor to the drag queens? That’s fantastic,” host Ellen Degeneres responded.

Not only does this career sound "fantastic," but it also sounds really fun to watch. Let's just hope the show lasts long enough to get into Bullock's post-college days and her crush on Keanu Reeves. Who knows, maybe fans could get a big Speed-inspired musical number out of it.

More like this
A New 'And Just Like That' Table Read Pic Confirms A Key Character's Return
By Jack Irvin and Grace Wehniainen
Netflix Reveals First Look At Wednesday In The 'Addams Family' Spinoff Series
By Bustle Editors
How Much Are The 'Schitt’s Creek' Stars Worth?
By Hugh McIntyre
‘SNL’ Finally Spoofed Nicole Kidman’s Weirdly Beloved AMC Ad & Nailed It
By Stephanie Topacio Long
Get Even More From Bustle — Sign Up For The Newsletter