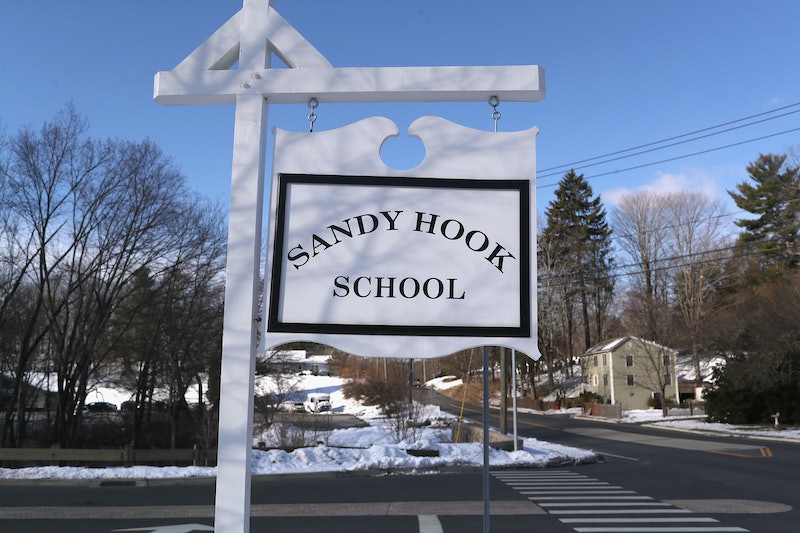 Another grim report has arrived in a week full of tragic news related to gun violence. On Friday, a bomb threat forced students at Sandy Hook Elementary School to evacuate, according to the Associated Press. The incident came on the six-year anniversary of the shooting that led to the death of 26 people — including 20 children — at the Newtown, Connecticut school.

Kids were escorted out when the threat came in at around 9 a.m. ET. In part because of a "heightened level of anxiety in town" due to the shooting anniversary, the superintendent decided to send students home for the rest of the day, police Lt. Aaron Bahamonde told the AP.

"We are confident that everyone is going to be safe but we always have to investigate every threat," Bahamonde announced, per The Hartford Courant. "Out of an abundance of caution officers are checking the area and making sure the kids are safe as they are being dismissed."

According to NBC, police in Newtown don't think that the incident was related to a multitude of bomb scares that occurred around the country on Thursday. Hospitals, businesses, and schools were targeted with the threats across the United States and Canada in places like New York City, Oklahoma City, and Montreal.

Incoming governor Ned Lamont addressed the incident on Friday morning. "We were just informed that there was a credible bomb threat at the Sandy Hook Elementary School on the sixth anniversary of the massacre there," he told reporters, per the Courant. "Police are there investigating as best they can. It's a day that's going to live with us for a long time here in Connecticut."

According to NBC CT, police believe that the threat was a hoax. They thoroughly searched the school grounds, found nothing, and left around 12 p.m. ET on Friday.

Although the scare did not end up posing a threat to students, many on social media expressed their sympathy for the continued stress that Sandy Hook families are forced to face. "My heart is breaking," tweeted Sen. Chris Murphy, who represents Connecticut. "The kids from Sandy Hook should be in middle school today," March For Our Lives co-founder Matt Deitsch tweeted. He added, referring to the bomb scare: "6 year olds born after the massacre are hiding in the same school."

On Dec. 14, 2012, a 20-year-old gunman entered Sandy Hook and murdered 20 first-graders and six school personnel before taking his own life. He primarily used a semi-automatic AR-15 that he'd taken from his mother, per Britannica.

"The pain and heartache here is real and raw every day, but more so on dates like today," Sandy Hook Promise wrote in a statement, per ABC. "We condemn the acts of those who seek to extend the trauma and pain on students and families in our community."

According to ABC, the bomb threat on Friday specifically referenced the fact that it was the massacre's sixth anniversary. "It's not unexpected that these anniversary dates bring out the evil in some people," Bahamonde said.