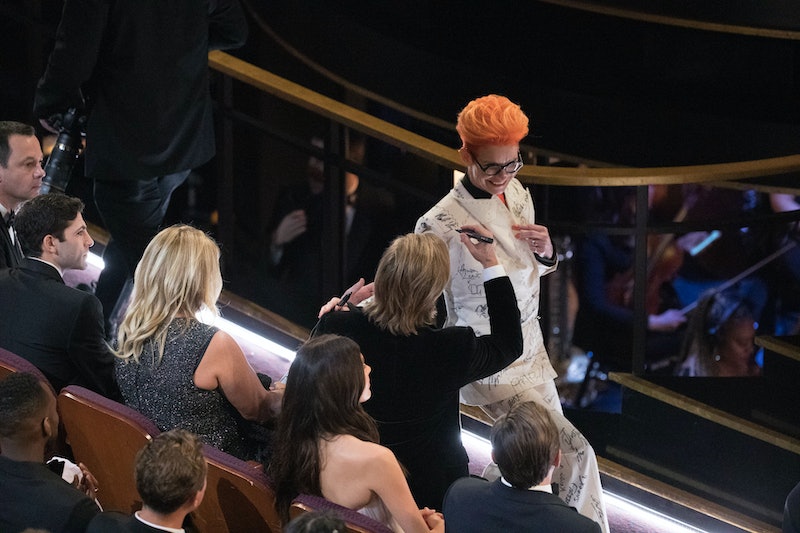 Among a sea of couture dresses and daring two pieces, there's one outfit that stood out at the 2020 Oscars not just for how it looked, but for what it stood for. Acclaimed British costume designer Sandy Powell arrived at the event wearing an off-white, wide-lapel suit that she asked attendees to sign. An unusual request? Yes. But all for a good cause. Powell has actually worn the same suit twice now, aiming to fill the two-piece with names and auction it off in support of The Art Fund initiative to save Derek Jarman’s Prospect Cottage.

After dressing Robert De Niro and Al Pacino in The Irishman and winning an Oscar for her costumes in The Favourite, Powell hasn’t let her impressive accolades distract her from important charitable causes as this project. Prospect Cottage is based in Dungeness, England, surrounded by a breath-taking garden that has been preserved perfectly for decades. The heart of this place lies in its history with former owner Derek Jarman, an English filmmaker and LGBTQ+ activist, who purchased the place as a sanctuary for himself during his last years suffering with the Aids virus. It was Prospect Cottage where Jarman found his creativity again through gardening and painting until he passed away in 1994.

Since then, Prospect Cottage has remained open to the public however, there is threat of the area closing down and becoming private property if £3.5 million is not raised by March 31st 2020. This has sparked passionate artists like Powell to help raise money in any way they can. In a world obsessed with celebrity culture, the idea of compiling famous names together to raise funds is a genius idea from Powell and will no doubt, will help The Art Fund initiative considerably in the next few weeks.

Along with this foundation, Powell also showed her support of sustainable fashion wearing the same signature-filled suit at award shows since the beginning of February. This isn’t the costume designer’s first foray into sustainability as she previously wore an Aganovich Spring '19 suit to the 32nd European Film Awards made entirely from “technically sustainable” paper according to the label’s Parisian-based designer Brooke Taylor. Powell also attended the Oct. 2019 Governors Awards wearing a vintage Thierry Mugler suit she has owned since the late ‘80s, paired with Elyse platforms by Stella McCartney – a British label famously admired for its ground-breaking use of recycled fabrics.

Powell discovered the art of dressmaking through her mother, who made all her clothes growing up. This exposure sparked Powel’s interests in fashion design which she eventually studied at Central St. Martins in London. Aside from environmental issues, understanding the time taken to source fabrics and the skills required to put clothes together has no doubt made Powell incredibly conscious about disregarding outfits after one wear.

She mentioned her tendency to reuse pieces as she discussed her outfit in a recent interview with The Female Lead, “The shirt is old Gucci from ’97…I bought for Margot Robbie on The Wolf of Wall Street”. Powell went on to refer to her obscure choice of laces as a tie, “…there was a pair of trainers that belonged to my boyfriend with orange laces, so I stole that.” Despite working in such a face-paced industry as costume design, Powell does what she can off camera to recycle garments - not just because its ecologically correct, but she clearly enjoys injecting new life into old pieces.

It’s great to see this British designer using her platform to bring to attention sustainability in a creative and charitable way that will hopefully help save Prospect Cottage along with the environment.