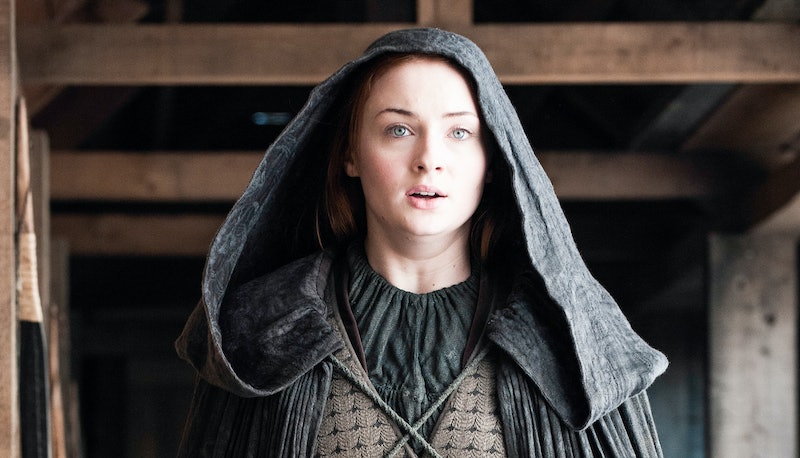 #WinterIsHere — this is something the second trailer for Game Of Thrones Season 7 makes very clear. But what this latest GOT teaser also lets fans know is Sansa Stark is going to make her voice heard in Season 7. While Sansa was nowhere to be found in the previous trailer for this season, which premieres July 16, it's her voice you hear now, sharing quite the ominous message. Perhaps, for the current King of the North, Jon Snow. "When the snows fall, and the white winds blow," she says. "The lone wolf dies. But the pack survives."

Sansa's quote in the Season 7 trailer is a line her father Ned Stark told Arya in George R.R. Martin's first book A Song Of Ice And Fire, a word of the wise on why families should stick together. Sansa has been pushed around before, but it seems she's done with that. In fact, she may be vying to be leader of that pack.

In a recent interview, actor Sophie Turner said Season 7 will give us a new, much darker Sansa. And this message seems to hint that the character is done letting other people make her decisions. But who will Sansa bring along for her race to the throne: her half-brother who's really her cousin Jon Snow, or Petyr "Littlefinger" Baelish?

The trailer certainly sets up a triangle between Sansa and those two men. There's a shot of an unsure looking Sansa, as Petyr Baelish's voice says, "Don't fight in the North, or the South, fight every battle everywhere, always in your mind." She's walking away, and you can't help but wonder who or what she's leaving behind. Petyr seems to be setting Sansa up to go her own way and take control over her own life, possibly with him by her side. Despite her turning down his marriage proposal.

It's possible it's Jon Snow she's leaving, who didn't give Sansa enough credit for saving him in the Battle of the Bastards. It was her, after all, that prevented his army from getting crushed to death by calling on Littlefinger for help. It's possible she'll call on him again, especially since Turner told Variety in 2016 that Sansa's "not getting the credit she feels she deserves from Jon Snow. "I think she’s seeing Littlefinger as a bit more trustworthy and more of an ally than she initially thought," the actor said.

If he's her ally in this scenario, it's safe to assume Jon Snow would be the enemy. It's clear, Jon and Littlefinger will have their own fighting this season. The last trailer showed Jon with his hands around Littlefinger's throat. But there is a possibility that Sansa, like her late dad, knows that the Starks working together would be an unstoppable force. Already, it's been teased that Season 7 will include a Stark family reunion.

Jon Snow is heard in this trailer talking to someone about building a united front against the real enemy: the White Walkers. It's likely he's speaking to Daenerys, whose army would be a big help in taking on the icy undead. "Despite their differences. Together," Jon Snow says of dueling families that once had a common goal. "We need to do the same if we're going to survive, because the enemy is real. It's always been real."

It's possible Sansa could also take that approach when working alongside Jon. Despite their differences, they could come together for something much bigger than themselves — to defeat those lone wolves. Namely, Cersei, who has lost most of her brood but managed to take the Iron Throne. Either way, it's clear Sansa is staking her claim as someone who doesn't just want to win this game — she wants to win the war.