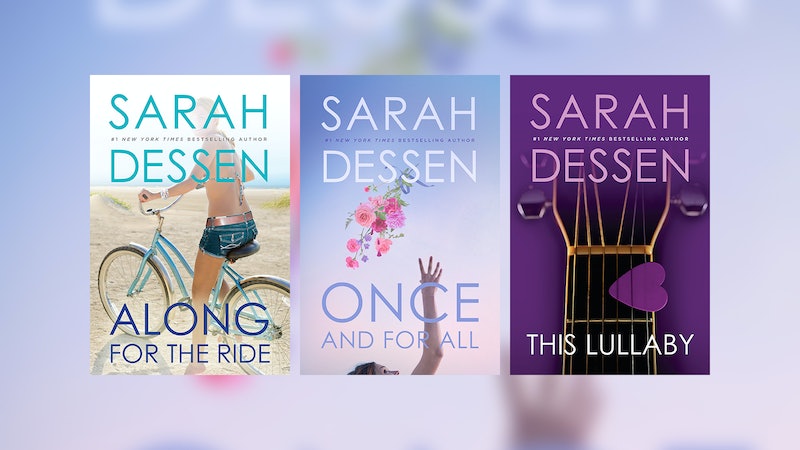 YA readers are in for a treat. As The Hollywood Reporter revealed on Thursday, beloved author Sarah Dessen's movie deal with Netflix will bring three fan-favorite novels to the streaming platform's collection of original material. Netflix has optioned Along for the Ride, This Lullaby, and Once and For All for adaptation on the platform.

Along for the Ride will be first of Sarah Dessen's novels to be adapted for Netflix. The story centers on Auden, a recent high school graduate, who experiences sleep disturbances in the wake of her parents' divorce. When she spends her first summer with her father and his new family in a beachfront town, Auden meets Eli, an insomniac and loner, who shows her around the town's nightlife. Along for the Ride won the 2009 Goodreads Choice Award for Young Adult Fiction.

Bryan Unkeless and Eric Newman (Bright) will produce Netflix's adaptations of Dessen's novels, as part of their joint venture, Screen Arcade, with creative executive Alyssa Rodrigues set to executive produce. Screen Arcade signed a first-look deal with Netflix in 2018. At the time of that signing, Deadline reported that the production company was set to begin work on the Bright sequel and Power, a sci-fi film written by Mattson Tomlin and directed by Henry Joost and Ariel Schulman.

There's no word yet on when Along for the Ride, This Lullaby, and Once and For All will premiere on Netflix, but YA fans can look forward to more great content on the streaming platform in the near future. Sarah Dessen's novels are the latest in a long line of YA adaptations Netflix has tackled in recent years. Jenny Han's 2014 novel, To All the Boys I've Loved Before, came to the streaming platform in 2018, as did Julie Murphy's 2015 novel, Dumplin', and Beth Reekles's 2012 novel, The Kissing Booth. That's in addition to the adult novels and stories Netflix has snatched up for original content, which include Josh Malerman's Bird Box, Stephen King's 1922 and Gerald's Game, and Kent Haruf's Our Souls at Night. Book-to-screen adaptations that are forthcoming on Netflix include Jennifer Nivens's All the Bright Places, Joan Didion's The Last Thing He Wanted, and John Scalzi's Old Man's War, among others.

Sarah Dessen's Along for the Ride, This Lullaby, and Once and For All are available now. Her new book, The Rest of the Story, is out on June 4 and is available for pre-order now.