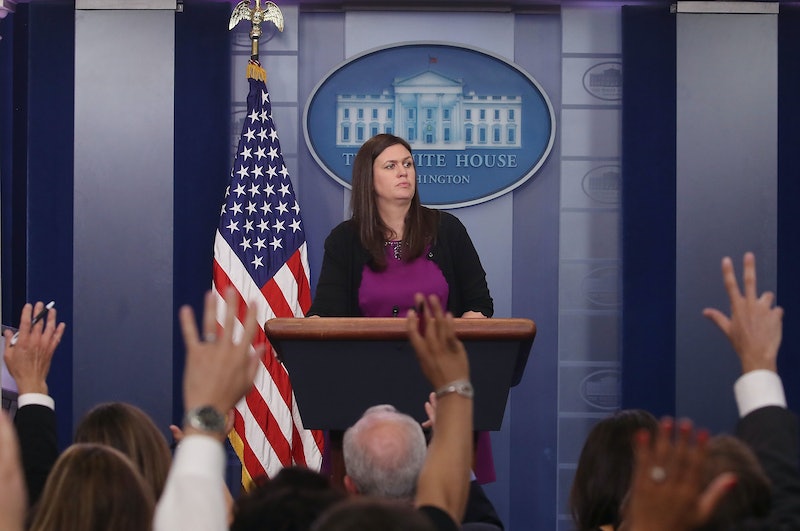 On Friday, Sean Spicer resigned from his job as White House press secretary after a mere six months on the job, reportedly in part due to the hiring of Wall Street financier Anthony Scaramucci as communications director. And during his first-ever statement to the press as a member of the Trump administration, Scaramucci announced that Sarah Huckabee Sanders is the White House press secretary going forward.

Huckabee Sanders, 34, has been deputy press secretary throughout the first six months of the Trump administration, and occasionally subbed in for Spicer over the course of his tenure. That became increasingly true in recent weeks, as she became a familiar face behind the podium, even as the number of on-camera press briefings has dwindled in the midst of scrutiny and controversy over the GOP's health care bill and the Trump-Russia scandal.

It remains to be seen whether Spicer's departure, Scaramucci's hiring, and Huckabee Sanders' ascension will result in a return to daily, on-camera briefings. In fact, Scaramucci was unwilling to commit to more on-camera briefings during his introductory press conference, saying he'd need to speak to President Trump before making any such decisions. He did repeatedly praise Huckabee Sanders, however, and told the assembled press corps that the president "loves" her.

While Spicer's stint as press secretary ended up being extremely brief, and Huckabee Sanders' promotion incredibly quick, it's not the fastest turnover that's ever been seen for that job. At the very start of the Clinton administration, George Stephanopoulos spent just 138 days as press secretary before giving way to the aforementioned Dee Dee Myers. By way of comparison, Spicer's run lasted 182 days, or just slightly more than six months.