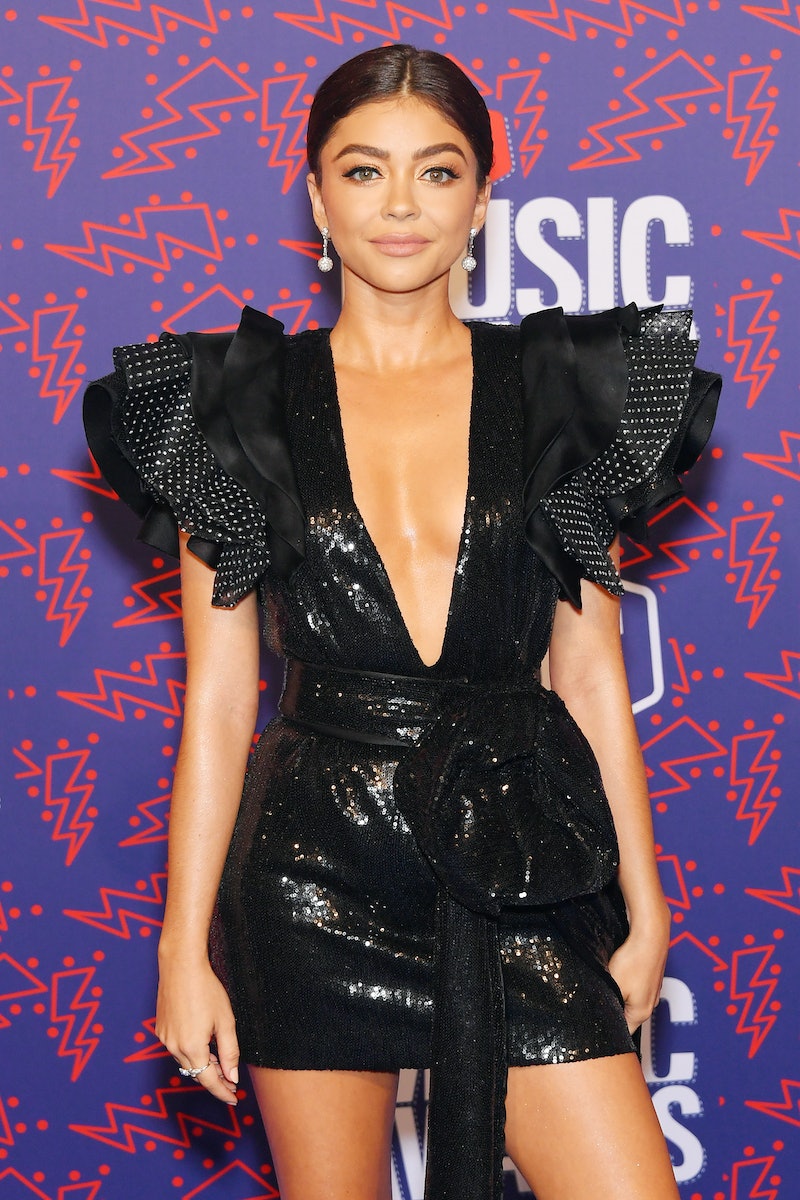 If you feel like everyone around you has been getting engaged this summer, add Sarah Hyland to that list. The Modern Family actress just got engaged to The Bachelorette's Wells Adams, and shared photos of the moment on Instagram on July 16. But the real star of the show is Sarah Hyland's engagement ring.

According to E! News, the ring is from Lorraine Schwartz, who has designed jewelry for A-list celebs like Beyoncé, Blake Lively and Kim Kardashian. Both Kardashian's massive 15-carat engagement ring and Beyoncé's 18-carat ring are from the jeweler. As is Lively's $2 million pink diamond engagement ring. Schwartz is obviously the woman to go to if you're getting engaged in Hollywood.

According to E! News, Hyland's ring looks to be a 5-carat Oval cut diamond on a simple thin band. Andrew Brown, CEO of WP Diamonds, told E! News the ring could be estimated anywhere between $175-$200,000.

Hyland announced the engagement on her social media with a carousal of photos capturing the moment. "That can’t eat, can’t sleep, reach for the stars, over the fence, world series kind of stuff," the actress captioned the series. The first photo captured Wells getting down on one knee on a beach, with Hyland standing with her hand over her mouth and holding a glass of wine. The second shows Hyland flashing her Oval-cut ring, and the third is of the engaged couple sharing a kiss.

Hyland also shared friends' and family's reactions on her Instagram Stories, offering fans a better glimpse of her engagement ring. Below Hyland is video calling her friend, actress Stephanie Branco, offering a better view of how big the diamond is.

Wells also shared the news on his own Instagram. Rather than posting photos, Wells shared a video of him proposing. Throughout the one-minute and 20-second clip, there were also snapshots of the couple on their beach vacation and pictures taken directly after Hyland put the ring on.

"I’ll be Johnny, you be June. But forever," Wells wrote underneath the caption, quoting a lyric from Drew Holcomb & The Neighbors.

"I love you to Pluto and back FIANCÉ!!!!" Hyland commented on the photo. "When we get married will I automatically acquire your talent for making everyone cry with a homemade video?"

The pair first met each other in 2016 when they began a flirtatious friendship over Twitter, but they didn't begin dating until 2017. “Have you seen those memes of ‘Slide into the DMs?’ That. He slid into my DMs,” Hyland shared on Jimmy Kimmel Live! in 2018.

“I was following him,” Hyland said. “We had tweeted each other because I thought he was funny and he was a fan of the show. I was single, obviously, and was like, ‘This is really awesome. You’re being very forward and it’s sexy and not aggressive but very confident and sexy,’ and I liked that."

What once began as a Twitter conversation is now an engagement. One with a stunning ring to match.