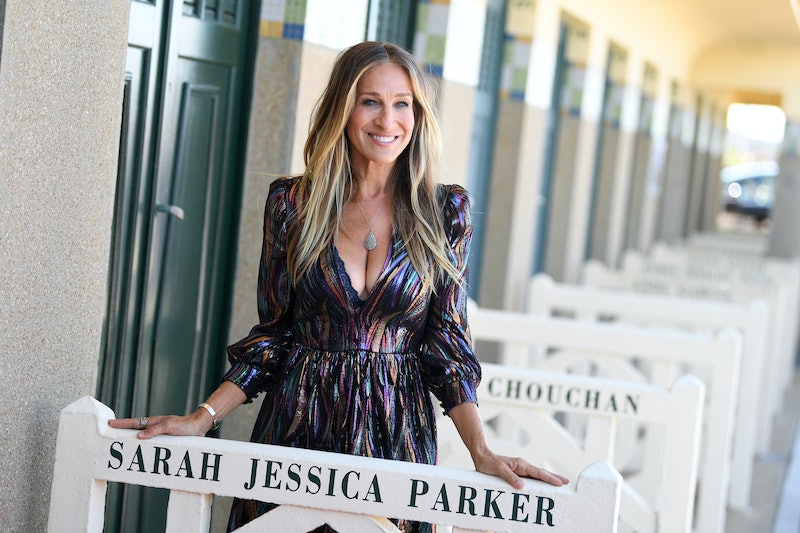 Rumors about Sex ad the City 3 come and go, but Carrie Bradshaw is forever. She's basically diamonds. That's what the HBO series' star has proven with a recent post on social media. Sarah Jessica Parker is revising her Sex and the City character — though exactly for what, and for how long, is unclear after the tease.

Let's break down the actual Carrie Bradshaw comeback Instagram post. All we see is Bradshaw, clad in tulle with her signature stilettos, walking through New York City in much better weather than the polar vortex-y January day that Parker posted the 'gram. There's SATC music playing, and then the hashtag #PourItForward appears.

If you do a little digging, it appears that hashtag is promoting a partnership between Stella Artois and water.org — a nonprofit organization that was co-founded by Matt Damon. Is he also a part of... whatever this is? Is Carrie Bradshaw switching from cocktails to pilsners?! This is all speculation, as Parker's post does not get into specifics yet.

The caption simple says this:

"My old friend. She is making a brief reappearance. Partnering with a great brand and supporting a cause we all care about. More to come. X, SJ"

Check the tease out below:

So, it's probably for an ad campaign of some kind, to say the least.

However — if this campaign is what I think it is, it's for a good cause. The upcoming #PourItForward campaign between water.org and Stella Artois is a fundraising effort to supply clean water to the developing world. Purchasing one piece of Stella Artois glassware gives someone water for five years according to the official website:

It’s hard for us to truly imagine what it would be like to not have access to clean water. But for 844 million people around the world, this is reality. Since 2015, Stella Artois and Water.org have partnered to change that. Through our partnership, we’ve helped provide access to clean water for more than 1.7 million people in the developing world to date. Our goal is to reach 3.5 million by 2020. By purchasing this Limited-Edition Chalice, you can help transform lives around the world. This creates a ripple effect: with access to clean water, women can care for their families, families can earn an income and pursue their dreams. That’s what we call Pouring it Forward.

If you look at the campaign's fine print, you'll see that just over three American dollars is all it takes to provide a person in the developing world with that much water. So if this is a cause you believe in, or are just learning about, you may want to consider just donating to water.org as well. Those of us who have access to clean water take it for granted, but the global water crisis is major, fixable, and not as distant as it seems, if you look at the recent water crisis that happened in Flint, Michigan.

That said, the chalices are truly a work of art. The collection was designed by watercolor artist Eili-Kaija Kussniemi. The website won't allow you to place an order at the time of SJP's post, though it says "coming soon" — which just makes it seem even more like the two are connected. If anything is going to get Carrie Bradshaw herself to drink beer, of all things, it's likely a cause as good as this one.