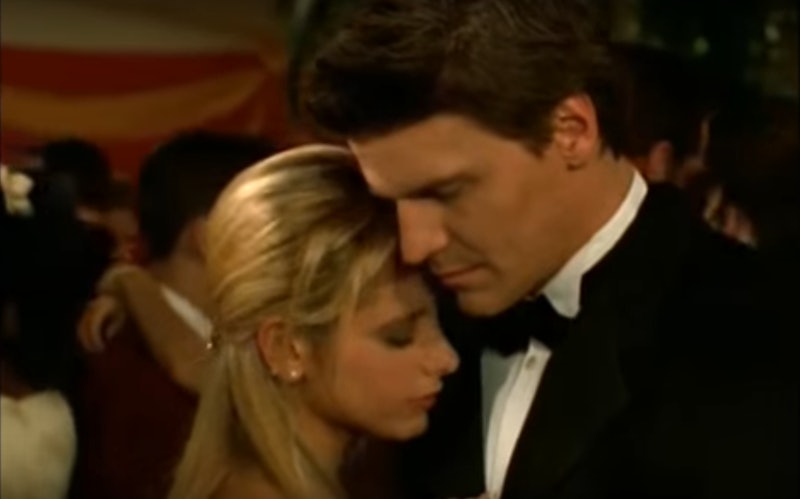 With the age-old debate of Angel versus Spike being reignited following Entertainment Weekly's recent reunion of the Buffy The Vampire Slayer cast, it's important to know where the Slayer herself stands on the matter. A matter which was quickly settled on Tuesday during a hearty game of shag, marry, or kill on Watch What Happens Live With Andy Cohen. Forced to choose from Angel, Spike, and Xander, Sarah Michelle Gellar proved that she's Team Angel once and for all with a response, which honestly makes me feel like I've been staked through the heart.

Without even a moment of hesitation, Gellar eagerly responded,

Now, OK — I'm on board with the whole shag Spike side of things. You'll get no argument from me there. But killing Xander, in order to marry Angel? I'm not standing for it, Gellar. I mean, let's think this whole thing through, shall we? Because there's definitely a more satisfying answer to this conundrum, and frankly, we need to talk this out.

Personally, I was always happy as long as Buffy was with either Spike or Angel. Preferably, she would have had both, but sadly the universe just isn't that generous. As a young teen, both of these brooding, undead dreamboats had me utterly obsessed. But as I've gotten older, and a little wiser, one thing has become painfully clear: Angel just isn't that interesting.

Sure, he's tall, dark, handsome, and comes with the irresistible appeal of a forbidden sexuality that is one "perfect moment of happiness" away from a murder rampage. But without all that, he's a little, well, meh.

That's absolutely not something you want to spend the rest of your life with. Especially not when you're the Chosen One of your generation and can pretty much take your pick of dream babes. Plus, who would want to spend their life in a sexless marriage because they're too scared of inspiring a vampiric killing spree? These are the gigantic questions that we need to be asking, people.

Which brings me to Spike, who, for better or worse, is definitely not as dull as a table lamp. In fact, he's quite the opposite. But while the sex will eternally be terrific with an undead hound dog like that, the character was also an absolute nightmare. He was volatile and obsessive. He had no sense of boundaries, and had a whole ton of entitlement for a guy without a pulse.

Spike might not be marriage material either, but at least he could carry a compelling conversation and have sex without it contributing to the local body count (I don't know if you've noticed, but this point is super important to me, guys).

There's one final person that we need to talk about, because I honestly think that his relationship with Buffy is completely underrated, and that's Xander. It's established pretty early on in Season 1 that poor old Xander is smitten with Buffy, and he'll do just about anything to protect her, even if she doesn't always need it. But actually, there's an impressive number of moments when he stepped up and risked his life to help save her.

And yeah, I know he could be a bit of an ass, and he left Anya at the altar (I'm still not over that episode), but deep down he was a good guy and he would do anything for his best pals. In fact, his friendship with Buffy is one of the few relationships that remains consistent throughout the course of the show, and I'm so here for it. This is true love.

Honestly, it's not even that big of a deal. I mean, did you even watch Season 3? Kill Angel and he'll probably just return to the land of the living not too long afterward anyway. No biggie.

More like this
'Derry Girls' Sister Michael Isn’t As Fictional As You Might Think
By Olivia-Anne Cleary
David Schwimmer Doesn't Remember This Classic 'Friends' Episode
By Sam Ramsden
The 'Hocus Pocus' Sequel Finally Has A Release Date & It Makes Total Sense
By Shannon Barbour and Radhika Menon
Hayden Panettiere Will Return For 'Scream 6': "We F*cking Won, Scream Fam"
By Jack Irvin and Jake Viswanath
Get Even More From Bustle — Sign Up For The Newsletter