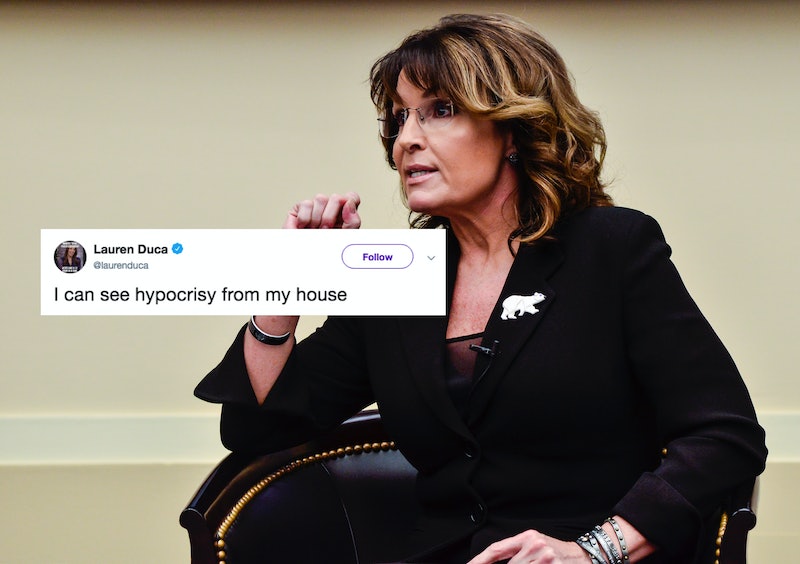 America's soon-to-be youngest congressperson hasn't even been sworn in yet, but she's already proving adept at using social media to shut down naysayers and trolls. Among other things, people have called her out for her clothes, her age, and her bank account — and as of this week, her grasp of civics. On Monday, Sarah Palin mocked Alexandria Ocasio-Cortez's "basic civics" knowledge in a tweet, and by Wednesday it was clear that Twitter was not there for it.

This all started with a video Ocasio-Cortez recorded to discuss Democrats' goals after the midterms. Talking about the need to retake control in the executive and legislative branches, she accidentally used the phrase "three chambers of Congress," immediately correcting herself to say "three chambers of government: the presidency, the Senate, and the House." Even though her point was clear, critics pointed out that the three branches of government are the executive, legislative and judicial, with the Senate and House making up the legislative branch.

Regardless of the larger message, Palin and other right-wing critics from The Daily Caller and Breitbart jumped on Ocasio-Cortez's flub, using the opportunity to paint her as inexperienced. "YIKES: Ocasio-Cortez Fumbles Basic Civics TWICE In 1 Statement," Palin tweeted out, linking to a critical article on her own website.

Naturally, Ocasio-Cortez's Twitter supporters wasted no time pointing out that Palin has her own, arguably larger, share of public gaffes from her time as the vice presidential nominee. They dragged up everything from mis-identifying the vice president as the leader of the Senate during her campaign, to floundering when Katie Couric asked her what newspapers she reads, to mentioning a nonexistent part of the government she called the "department of law." These days Palin's Twitter primarily promotes articles off her website, most of them sporting headlines intended to take down prominent liberals in politics.

Ocasio-Cortez, who represents New York's 14th congressional district has shown no hesitation in the last few weeks to push back on the messaging that she is too young or naive for the job. And as criticism from her defenders rained down on Palin's tweet, Ocasio-Cortez also took a moment to weigh in.

"Now that’s *TWO* fallen GOP Vice Pres candidates going after a freshman Congresswoman that’s not even sworn in yet. Isn’t it a little early to be bringing out the big guns?" she tweeted, referencing criticism from both Palin and Joe Lieberman. "Especially when they look like the FWD:RE:FWD:WATCH THIS grandpa emails from the ‘08 election they lost".

Amid attacks from the right, Ocasio-Cortez has continually stressed that conservative angst over her minor slip-ups is a tool to distract from her progressive agenda in Congress. "Maybe instead of Republicans drooling over every minute of footage of me in slow-mo, waiting to chop up word slips that I correct in real-tomd (sic)," she replied to a Republican Ohio state house representative, "they actually step up enough to make the argument they want to make: that they don’t believe people deserve a right to healthcare.