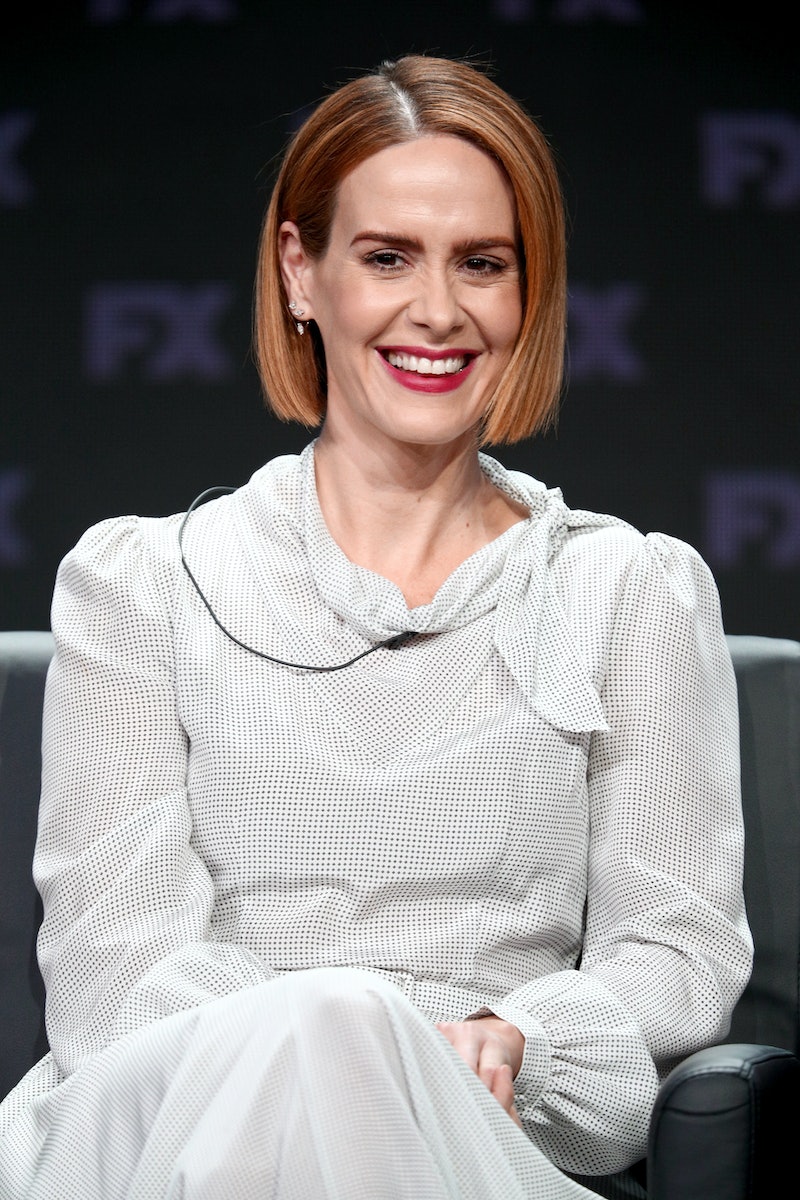 They may have starred in Ocean's 8 together, but Sarah Paulson still can't believe Rihanna texts her. While visiting the Watch What Happens Live With Andy Cohen clubhouse on Wednesday, Paulson once again opened up about chatting with RiRi via text. For those who are fans of the American Horror Story star and have followed her Rihanna texting adventures, then you probably have a good idea how Paulson reacted to the fact that the Grammy-winning artists has her phone number.

Paulson and Rihanna's texting conversations were brought up after a caller phoned in and asked the Golden Globe winner, "What was the last text that you sent to Rihanna?"

She replied, "I think I was congratulating her on a Fenty venture?" Paulson then proudly declared, "And she replied." (For those unaware, Fenty is Rihanna's company that so far has produced both a beauty and lingerie line.)

Of course, Andy Cohen wanted to know if the two leading ladies have a "boisterous text relationship" or if Paulson ever wonders whether Rihanna will actually respond back to one of her texts. To that, the Glass actor said,

Paulson admitted that eventually Rihanna said to her, "She was like, 'That was me, why didn't you write me back?'"

Despite knowing the singer for quite awhile now, having conversations with her over text, and starring in a movie with her, Paulson is still in disbelief that the Rihanna would and does text her. Honestly, who can blame her? Paulson's thought process is totally relatable.

This is far from the first time the Emmy-winning actor has discussed Rihanna. During a May 2018 appearance on The Ellen DeGeneres Show, Paulson told the daytime host that she liked to think the two had become friends post-Ocean's 8. "We have texted," Paulson said. "I think we're friends."

She also admitted it was difficult being around Rihanna without freaking out, because, yes, Paulson is also a huge fan. "It was sort of a daily struggle to not embarrass myself," she said. "Every time I looked at her I was like, 'Work, work, work, work.'"

Paulson continued telling Ellen DeGeneres about embarrassing herself in front of the "Work" singer,

"I dealt with my own anxiety by going up to Rihanna and being like [while singing to the tune of "Work"], 'I've gotta new song I could do for you.' And she's like, 'No, Paulson.' I'd be like what about, 'I'm in a birdcage,' she's like, 'No, you're not in a birdcage. I really need you to stop singing.'"

If that isn't enough, Paulson also made this face while on Ellen last May to describe any situation that makes her feel anxious and the nervous emotions that come with both being around Rihanna and walking a red carpet:

The most relatable facial expression and response ever. Paulson can't help herself, because she just loves Rihanna that much. Like she said on Late Night With Seth Meyers in December 2017, "I have a low-level, super cool, chill obsession with Rihanna."

There's no denying Rihanna exudes coolness and it would take a long time for probably most everyone to come to terms with the fact that RiRi not only has your phone number, but also texts you. Yeah, Paulson, your feelings are totally understood, but remember you are just as cool as Rihanna. Who else would love to get a text from both Rihanna and Paulson? Same.

More like this
Shonda Rhimes' Net Worth Makes Her One Of The Wealthiest People In TV History
By Hugh McIntyre
Devon Diep From 'Bling Empire' Wrote A Song About Her “Second Chance At Love”
By Grace Wehniainen
Everything To Know About Taylor Swift’s 10th Studio Album, 'Midnights'
By Grace Wehniainen and Jake Viswanath
Sarah Jessica Parker “Doesn't Remember” What 'Hocus Pocus' Is About In Resurfaced Clip
By Emily Mae Czachor and Radhika Menon
Get Even More From Bustle — Sign Up For The Newsletter