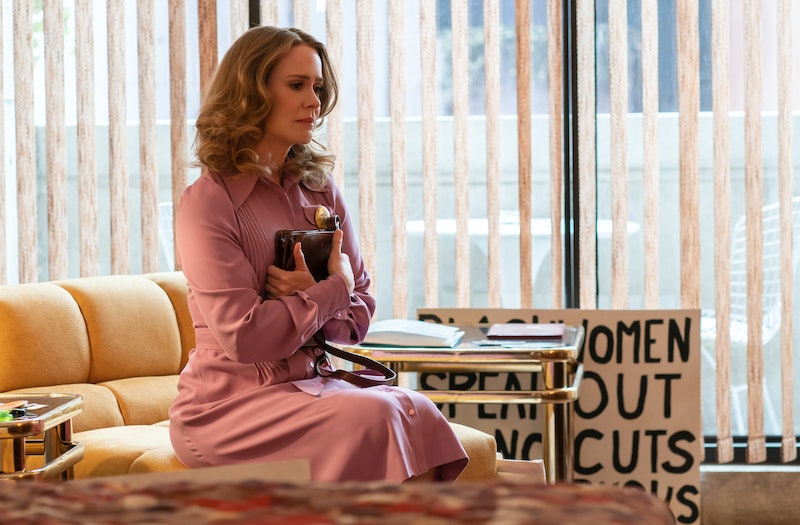 So far, each episode of FX’s Mrs. America has been named for the powerful woman whose work provides its plot: Gloria, Betty, Bella, Phyllis. But this week’s installment is simply titled “Houston” — the host city of the 1977 National Women’s Conference, the first meeting of its kind since Elizabeth Cady Stanton rallied for suffrage in Seneca Falls. Instead of shadowing the leaders of the Equal Rights Amendment campaign and its opposition, the episode is devoted to their followers as they struggle to navigate the crammed maze of the convention center. In particular, "Houston" tracks Sarah Paulson’s Mrs. America character Alice, a housewife and Schlafly disciple who spends a long, trippy evening questing for food, losing her way among the diverse groups of women, and eventually finding her own mind.

Unlike the real-life figures that Mrs. America usually chronicles, Alice Macray is pure fiction. She’s not an icon, but an avatar. “There were women in Phyllis's life who had something of this kind of trajectory,” Paulson tells Bustle. In the episode, Paulson plays Alice, suddenly liberated from Schlafly’s cutting glare, with a dumbstruck naïveté. She balks to learn that the Woody Guthrie folk anthem “This Land Is Your Land” — a song she sings at home with her children and in Houston with lesbians who offer her supper — was written by a socialist; she can’t believe the God-fearing woman she’s been drinking with is pro-choice. “The fascinating thing about Alice is that it's not that she makes a move and becomes a liberal," Paulson says. "It's that she realizes she was getting a very narrow view of the story.”

For Alice, unwittingly high on the "Christian pill" she’s offered earlier in the episode, Houston becomes an intellectual walkabout. She loves her life as it is, secure in a mothering role that suits her kindness and surrounded by like-minded women who share her values, echo and entrench them. Somewhere amid the warren of hotel suites, though, Alice sees how tiny her sink window into the world has been. While it would be easy to dismiss her as someone escaping the thrall of a charismatic leader, Paulson sees a perfect through line to how our politics are contoured even now, when the whole panorama of information is supposedly open to us.

At the convention, Alice sees Gloria Steinem solicit feedback from her colleagues in a way that Cate Blanchett’s Phyllis Schlafly would never. She realizes that her political enemies are just people — “with beating hearts and brains,” says Paulson.

The episode reveals the importance of centralizing a character who isn’t based on a real person with real and unmovable politics. Initially, Paulson was “jealous” of the actors able to immerse themselves in the richly documented histories of the women they play. Meanwhile, Alice could take any shape. “You end up going, well, I could do this and she could think that,” Paulson says. “And it's sometimes a little bit harder to get purchase on the truth of who the character is.”

But if daunting choice is the tax of playing Alice, “Houston” is its thrilling reward. “I got to play a character who truly had a real velocity to her arc and who could land somewhere and turn back over her shoulder and think, 'How did I get here from there?'” A character who effectively changes the channel from Fox News to CNN, at least for a segment or two.

Part of what attracted Paulson to Mrs. America in the first place is that the project lets her stand inside what she already believes. She may have been born a too late for marching, but she was raised in New York City by a “very progressive” mother. Still, to play Alice, she had to “step inside a pair of shoes that don't fit.” It was an opportunity, she says, “to grow as a person and as a performer.”

Paulson pauses, then adds: “And also, there's Cate Blanchett who's in it, so that that's a big piece of it, too.”