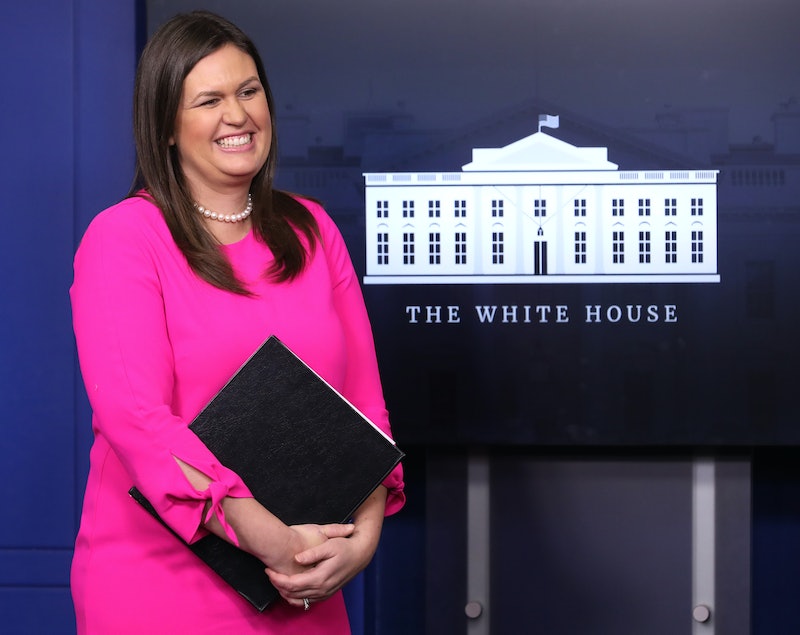 In a scorching tweet on Monday evening, Sarah Sanders called James Comey a "shameless fraud" and accused him of "tremendous corruption," citing a "fake Hillary Clinton investigation" as her proof. She further encouraged Republican lawmakers to stand up to Comey, though she didn't specify how, exactly, she wanted them to do so. The sharp words came after Comey provided a criticism of his own on Monday, as he told reporters that Republican lawmakers should be standing up to Trump in the wake of his attack on the FBI.

Comey's comments came after a near-six hour interview with members of the House Judiciary and Oversight Committee. Per CNN, he said to reporters on Monday,

Somebody has to stand up and speak for the FBI. People who know better, including Republican members of this body, have to have the courage to stand up and speak the truth, not be cowed by mean tweets or fear of their base. There is a truth and they're not telling it. Their silence is shameful.

Comey continued, via CNN, "The FBI's reputation has taken a big hit because the President of the United States has lied about it constantly."

Sanders didn't take this claim lightly. Shortly after Comey spoke to reporters, she took to Twitter and wrote,

Republicans should stand up to Comey and his tremendous corruption - from the fake Hillary Clinton investigation, to lying and leaking, to FISA abuse, and a list too long to name. The President did the country a service by firing him and exposing him for the shameless fraud he is

According to The Washington Examiner, Comey told reporters on Monday that his second interview was "another day of Hillary Clinton's emails and the Steele dossier."

In addition to criticizing Republicans' lack of response to Trump's behavior, Comey also called them out for not providing a strong response to Trump when he publicly labelled Michael Flynn a "rat."

Via CNN, Comey said, "This is the President of the United States calling a witness, who has cooperated with his own Justice Department a rat. We have to stop being numb to it; whether you're Republican or Democrat, stand on your feet, overcome your shame and say something."

On Dec. 9, Trump went on a Twitter rampage against Comey after the former FBI director testified before Congress on Dec. 7. Trump wrote in part,

Leakin’ James Comey must have set a record for who lied the most to Congress in one day. His Friday testimony was so untruthful! This whole deal is a Rigged Fraud headed up by dishonest people who would do anything so that I could not become President.

In contrast, Comey had tweeted immediately following his appearance at Congress that the entire event had been "a desperate attempt to find anything that can be used to attack the institutions of justice investigating this president."

Comey concluded the tweet with a strong statement on the future. He wrote, "In the long run, it'll make no difference because facts are stubborn things."