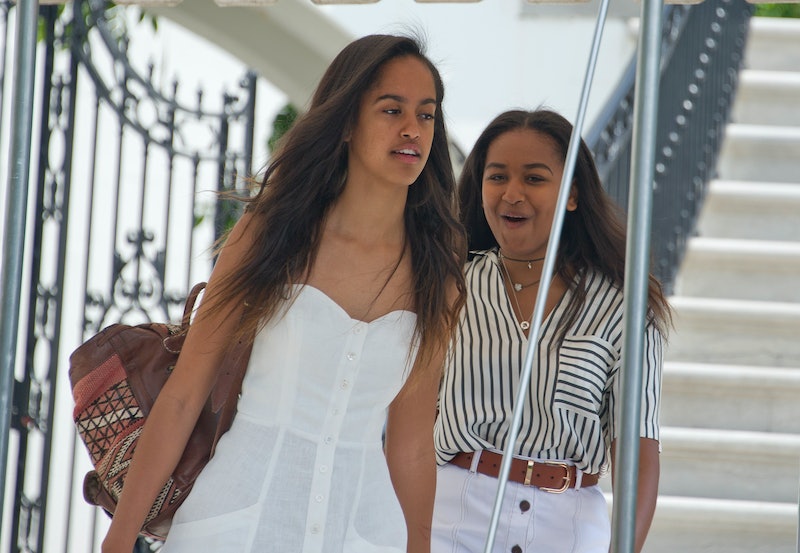 Over the weekend, 16-year-old Sasha Obama was photographed kissing a teen boy at Chicago's Lollapalooza music festival. What came afterward is unsurprising — an onslaught of attacks from conservatives on social media who felt that her behavior was "inappropriate," and that it reflected Michelle and Barack Obama's "bad" parenting skills. While every first child has been scrutinized and criticized by the press and public alike, some see the backlash against Sasha and Malia Obama, her older sister, as fueled by their gender and race.

Among the criticism aimed at the Obama family was that Sasha and Malia lacked self-respect, had "poor judgment," and that their parents did a poor job raising them. Radar Online described Sasha kissing a boy as "bad-girl behavior," and further connected the situation to Sasha spending time at Miami beach in a "skimpy" bikini in January.

Another media outlet published the headline "SASHA OBAMA PARTY GIRL???? Sasha Is Photo’d MAKING OUT . . . With Some Guy She JUST MET . . . At A ROCK CONCERT!!!" A comment on the article further reinforced that sentiment. "She still need [sic] to have some morals, you don't kiss people who you just met," one reader wrote.

For those familiar with the years of criticism directed at the Obama daughters over the years, it's hard to believe that Sasha's gender and the double standards over women's sexuality has nothing to do with the outrage of seeing a teen girl kissing a young man at a music festival. If a president's 16-year-old son were pictured kissing a girl, charges of "bad parenting" would most certainly be harder to come by. Studies have repeatedly shown than women and girls experience slut-shaming at a much higher rate than men and boys. Not only that, but girls and women experience a decrease in social acceptance if they are known to be sexually active, whereas their male counterparts welcome more social acceptance.

Unlike other first children who are older, white, and male (like 39-year-old Donald Trump Jr.) it's also clear that the Obama daughters haven't been afforded a period where they get to be young and make "mistakes" — though anybody would be hard-pressed to label kissing someone at 16 a "mistake."

Trump Jr., in contrast, is often referred to and treated as "a boy" or "a kid" not just by his father and friends, but also by Trump supporters and some in the media. His actions, which potentially carry the weight of legal and national security risks, are forgiven far easier by those criticizing the Obama teenagers for living teenage lives, brushed off as a "rookie mistake."

As the New York Times pointed out, this same kind of infantilization helped the Kennedy family navigate their way out of public backlash after 37-year-old Ted Kennedy drove off a bridge in Chappaquiddick Island, resulting in 28-year-old Mary Jo Kopechne's death.

Yet Sasha Obama is criticized for kissing a teen boy. Last year, Malia Obama faced condemnation after being filmed dancing at Lollapalooza, the same music festival her sister attended this year.

The perception that women who drink, dance, or dress in revealing — even slightly revealing — outfits are behaving inappropriately is far from new. As recently as March, female students attending Stanton College Preparatory School in Jacksonville were hit with this message through prom posters showing the difference between "good girls" who dressed "appropriately" enough to attend the dance and girls who didn't.

Yet not only is the criticism of the Obama daughters tinged with misogyny, it also carries racial overtones. Malia was hit with a barrage of racist insults after being accepted to Harvard University in May 2016. It's also worth noting that while the Bush daughters were repeatedly caught in photographs exhibiting much more "raunchy" behavior during their father's presidency, conservatives did not attack them with the same ferocity.

In 2014, former GOP staffer Elizabeth Lauten called the Obama daughters "classless" for wearing dresses and skirts that went above their knees. “Dear Sasha and Malia, I get you’re both in those awful teen years, but you’re part of the First Family, try showing a little class,” Lauten wrote in a Facebook post. "Act like being in the White House matters to you. Dress like you deserve respect, not a spot at a bar. And certainly don’t make faces during televised, public events.”

Former First Lady Michelle Obama recently spoke out against the racism and sexism she faced during her eight years at the White House. “The shards that cut me the deepest were the ones that intended to cut,” she told the Denver Post, in reference to a time in which she was referred to as "an ape in heels" by a West Virginia county employee. “Knowing that after eight years of working really hard for this country, there are still people who won’t see me for what I am because of my skin color.”

She added that she wouldn't deny the destructive effect of bigoted comments, as doing the opposite would let those who perpetrated the damage off the hook. “Women, we endure those cuts in so many ways that we don’t even notice we’re cut,” she said. “We are living with small tiny cuts, and we are bleeding every single day. And we’re still getting up.”

Hopefully, with a mother who's experienced the same kind of scrutiny for the same reasons, Sasha and Malia Obama will get the wisdom they need to overcome the undeserved criticism they often receive.