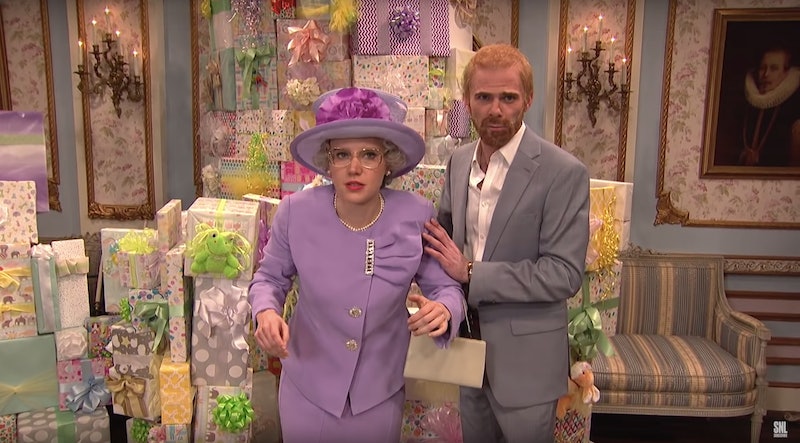 The royal baby is due any day now, and even the cast of Saturday Night Live is excited. SNL spoofed Prince Harry and Meghan Markle's baby shower, and fans of the royals will recognize plenty of characters in the sketch. Mikey Day brought back his impression of Prince Harry for the bit as he gave a video tour of the royal couple's baby shower. Guests at the event included plenty of British icons, such as Prince William, Kate Middleton, James Corden, Ringo Starr, Prince Charles, and Queen Elizabeth. Prince Harry also ran into a fictional ex-girlfriend named Tinsley Granger-Gash, played by Emma Stone, and a man named Charles who was a made-up friend of Markle's mother, Doria Ragland. In the sketch, the unique cast of characters make for a chaotic baby shower, complete with a few particularly awkward moments.

Prince Harry kicks off the video with a message for his future baby. "We are having a big baby shower, and I wanted you to come out and see all the people who came to celebrate you," he said. "So come on, let's take a lap." A few of the first guests he encounters include his brother, Prince William — played by Beck Bennett — and Kate Middleton, portrayed by Cecily Strong.

His interactions with them spoofs the rumors surrounding an alleged feud between the royal couples. it starts with Prince Harry pranking Prince William who arrives dressed as Freddie Mercury after being told it was an '80s costume party by his brother, before Strong's Middleton attempts to shoot down rumors of a feud with Markle. In real life, Middleton and Markle have ended feud rumors, which the sketch also joked about. "No, we're not feuding, why would we be?" Strong said in her Middleton impression. "Because I follow all the strict rules and she doesn't and people love her for it?"

The tense run-in with the Duke and Duchess of Cambridge wasn't the only awkward moment in the sketch. Throughout filming, Prince Harry dodges Corden, who is played by Aidy Bryant. "He's been at a 10 since he got here," Harry said as Corden sings. "Don't let him see the camera, he'll be on us all night." He also ran into bitter ex-girlfriend Tinsley, played hilariously by Stone, who hosted SNL on Saturday. "I'm glad we didn't make it Harry," Tinsley said, holding a glass of champagne. "I don't want to be a Duchess and live in a huge house for free."

Still, the sketch's standout moment may very well be Prince Harry finding his grandmother, played by Kate McKinnon, trapped under a pile of baby gifts. "I was snooping trying to find what the Clooney's got you when an avalanche of presents buried me," she said. The prince asks his grandmother to send a message to the baby, and McKinnon does a hilarious impression of Queen Elizabeth's mannerisms. "Hello, welcome to the family, I already love you," she said. "Even though you're half American, which means you're half traitor."

The SNL sketch was full of awkwardness, but the arrival of the royal baby will be a much calmer affair in real life. In April, Prince Harry and Markle decided to keep the royal baby birth private, as per Today. The decision means that there will be no traditional debut in front of the Lindo Wing of St. Mary's Hospital. That means royal family fans may be in for a wait before they see photos of Markle and Prince Harry's baby. But in the meantime, this funny sketch will give fans the behind-the-scenes spoof the world didn't know it needed.