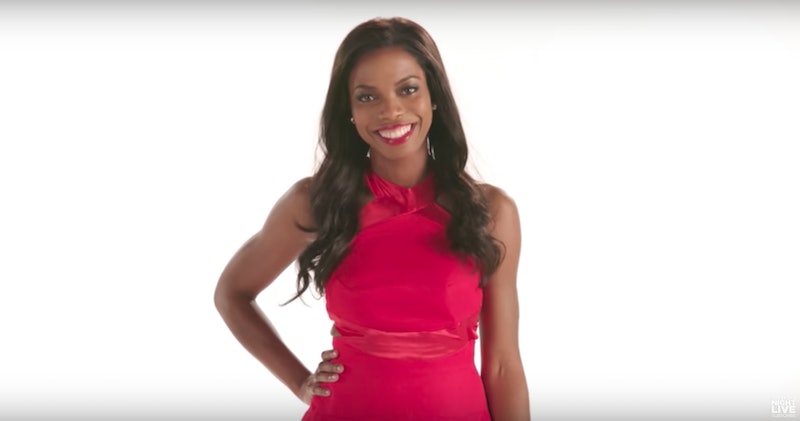 In February, ABC made the historic (but long overdue) announcement that they'd cast their first black Bachelorette, Rachel Lindsay. The response was overwhelmingly positive, though some understandably were concerned: Bachelor Nation doesn't have the most inclusive reputation, and the show could easily miss the mark. A deleted Bachelorette sketch from Saturday Night Live riffs on exactly that, highlighting the things that could potentially start the season on a sour note.

In it, Rachel (played by Sasheer Zamata) meets her suitors: Chris Pine, Beck Bennett, Kyle Mooney, Alex Moffat, Pete Davidson, and Kenan Thompson. But rather than focusing on getting to know Rachel, you know, as a person, their conversations are focused exclusively on her race, and she's left to fend off a barrage of tone deaf comments. "One charming and accomplished lawyer, and 25 hot dummies," says the narrator.

The first suitor rambles on about how he once made out with a black woman, another cuts her off to mansplain Get Out and mistakenly thinks Key and Peele is one person, and, after several cringeworthy attempts, Chris Pine's character tries to tell her white men are the new minority. Insert eye roll emoji here.

While that's (hopefully) a far cry from what the season will actually look like, it does align with what Rachel has said she envisions for herself — or rather, what she doesn't envision. Back when she appeared on "The Women Tell All" episode of Nick Viall's season, Rachel said that she was honored to be the first woman of color to lead The Bachelorette, but that she didn't want her race to be the focus of her capital-J Journey. And that certainly makes sense, because Rachel isn't just a checkmark for diversity. She's an actual woman who is genuinely looking for love — or at least, as genuine as you can be on reality TV.

So, while SNL's skit does make for some good laughs, it also serves as a surprisingly good primer for how to watch Rachel's season as its premiere date nears. Celebrate her race, but remember that she's so much more than a Bachelor Nation milestone.