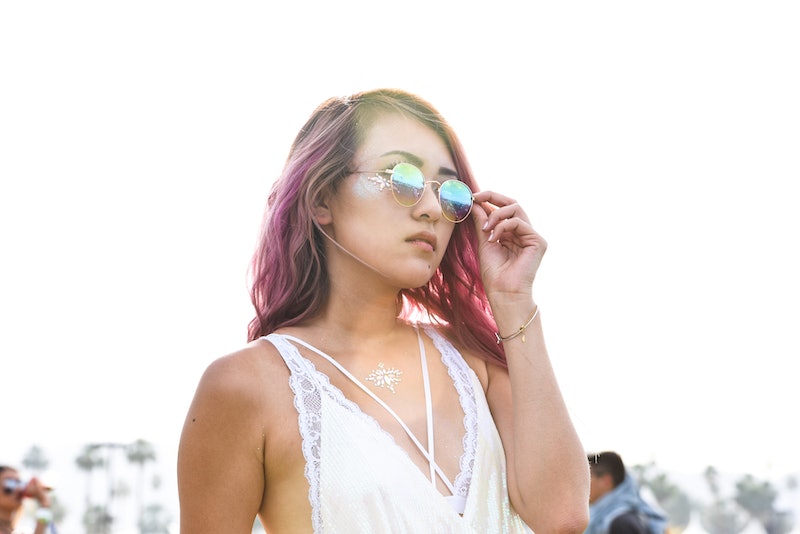 Mercury Retrograde mercifully ended on April 15, but a few days later, I wondered why things still seemed astrologically out of wack. Turns out that Saturn Retrograde kicked off on April 17, and is slated to keep doing its thing until Sept. 9 of this year. Saturn rules the planet Capricorn, and is associated with authority figures and structure, and so when it goes retrograde, it can feel like everything is upside-down — thus, Saturn Retrograde's effects can include feeling extra anxious, which, no thank you.

Astrology King explained on its website that this planet's long backspin could be accompanied by gloomy thoughts, bad news, or loneliness, all of which have a negative effect on your mental wellbeing. I'm an anxious person to begin with, but my anxiety kicked into overdrive earlier this week, perhaps because Saturn is trying to force me to confront some of my fears.

"Capricorn and Saturn want us to strive for security. Unfortunately, this can lead to feelings of doubt, insecurity, and anxiety during this transit," Tarot.com explained on its website. "We'll fear failure more than we normally would, possibly spending too much time worrying about whether everything we've worked hard for will fall apart or never come to fruition. Instead of letting it deter us, we should use this as motivation to push forward even harder than before." This week I've worried incessantly about where I'm going to live in a month when I have to vacate my house, whether I'll make enough money this year, and whether or not I'm on the right life path. Seriously, it feels like my Saturn Return all over again.

It turns out that this is what taskmaster Saturn is all about. And, the more you resit, the more difficult it's going to be. "This cosmic combination urges us to aim high, put our noses to the grindstone, and get concrete results. Think of Saturn in Capricorn as the ultimate get-your-act-together transit," Tarot.com noted. "When Saturn is retrograde, everything that supports the foundation of our worlds will be up for review. This is a period of slowing down and re-evaluating over our personal structures, obligations, and goals with more focus and clarity."

What's more, Saturn's three-year stint in Capricorn provides you an opportunity to examine your life and bring to light everything you've been avoiding. "Saturn in Capricorn motivated by fear of going unrewarded, strives to develop self-control, organizing ability, integrity, economy of effort," Genevieve Vierling wrote for Blue Light Lady.

Personally, I've spent a lot of time in the school of hard knocks because I am stubborn AF. However, the idea of being more anxious than usual during the seven months Saturn is retrograde, and the three years it's in Capricorn, sounds like being trapped in the Stranger Things upside-down world indefinitely. I guess this means I'm going to have to surrender and unpack some of my sh*t if I want to avoid this fate.

"Saturn as shadow represents qualities that we tend to deny in our own psyches," Vierling explained. "By repressing them (another Saturn term) they gain further power in our unconscious. The causal factors to these repressions are many which may stem from traumas and wounds in early life." If you suffer from anxiety, then you're familiar with the fear that accompanies it. And, I know from personal experience that avoiding confronting the underlying cause of your anxiety can lead to fear having a starring role in your life, which is pretty unpleasant to put it mildly.

On her website, Clairvoyant Zhaquline Hurzat defines unrealistic, anxiety-based fears (though they see very real to those who have them) that hold us back. These include fear of success, failure, love, commitment, rejection, standing up for yourself, loss, taking risks, sharing ideas, and change. Sound familiar? "If you find yourself stagnant and unhappy, its time to recognize and let go of your fears," Hurzat advised. "You have to spend some quality time with your inner self to find the patterns of your fears. Understand that you walked with these fears all your life, therefore it is difficult to recognizes something so familiar. You will only realize how heavy the locks and chains of fears are until you free yourself from them."

If you can totally relate to this, and you've been feeling all dark and twisty since Saturn began its retrograde cycle April 17, it might be time to confront some of your fears. You do you, and keep in mind that everything you're feeling is totally normal, and it's also a wake-up call from the universe. How you answer that call all depends on what you're ready for.

More like this
Here's Your Daily Horoscope For October 5, 2022
By Mecca Woods
Angel Number 111 Is All About Manifesting Your Power
By Brittany Beringer and Nina Kahn
You Can Get Custom Podcast Recs From Spotify Based On Your Zodiac Sign
By Brittany Beringer
The Spiritual Meaning Of Angel Number 444, Explained
By Nina Kahn and Kristine Fellizar
Get Even More From Bustle — Sign Up For The Newsletter