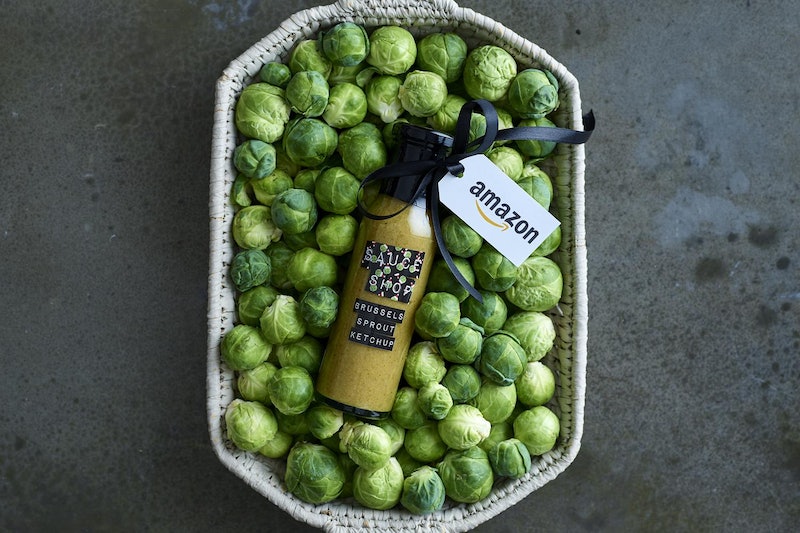 We all know the real deal about Christmas is all that nosh that only comes around once a year. Scrum-diddly-umptious am I right? However, there are some parts of Christmas dinner that are more controversial than others, speaking of which a new Brussels sprouts ketchup is taking the hotly-debated veg to the next level.

Please, stop shouting and let me explain. Just expel images of ruby red condiments from your consciousness right now, because this is something you've never seen before. Good Housekeeping reports that the product is a collaboration between British company Sauce Shop and online retail giant Amazon. And, not so shockingly, it's only available over the Christmas period.

The sauce is made of, you guessed it, British Brussels sprouts and a delicious blend of nutmeg, cinnamon, and cloves. Meaning it's as Christmassy as old Saint Nick getting stuck in the chimney.

According to Good Housekeeping, each bottle is made up of a stonking 15 of the controversial cruciferous Christmas bites, as Good Housekeeping reports. This could be the perfect condiment to douse all over your Christmas dinner, as well as an ideal dipping sauce for all of those canapés you're going to snarf, and of course a savoury lubricant to make those dry AF turkey sandwiches go down easier.

Pam Digva, who's the co-founder of Sauce Shop, spoke about the companies dedication to bringing the very finest ingredients to each saucy bottle. And you guys, she even explained the ridonkulous nutritional value of these tiny cabbagey veg.

"Our limited-edition Brussels Sprout Ketchup, which we’ve developed exclusively for Amazon.co.uk, is testament to the versatility of this highly nutritious, seasonal vegetable which has more vitamin C in one sprout than in an entire orange."

Goodness gracious, it's enough to make you double up on sauce. Because it's healthy right?

Quirky condiments to suit the holiday season aren't anything new, with lots of companies cashing in on people's love of the more unusual gastronomic delights. Who could forget the Easter time fusion of Heinz and Cadbury's Creme Egg? A tantalisingly terrifying combination which sounds kind of gross but also delicious in equal measures.