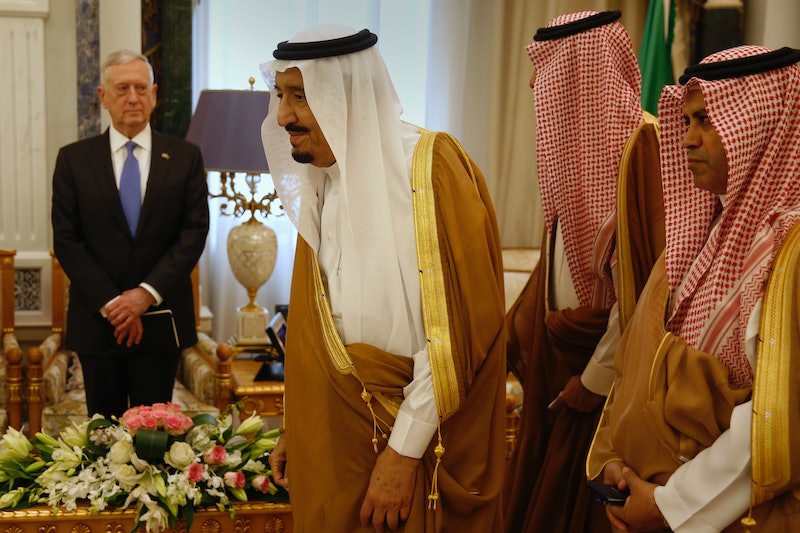 Donald Trump's visit to Saudi Arabia has garnered reactions from people, Muslim and non-Muslim, across the board. Some view Trump softening his rhetoric after a documented history of incendiary remarks on Islam during his campaign, while others believe he is strategically cozying up to one of the most orthodox and autocratic regimes in the Middle East. Trump himself addressed Saudi Arabia by saying, "I chose to make my first foreign visit a trip to the heart of the Muslim world." But that's the thing: Saudi Arabia isn't the heart of the "Muslim world."

I studied the entire transcript of Trump's speech delivered in Saudi Arabia, in which he showers King Salman with accolades upon accolades, highlighting the "enduring" alliance between the United States and Saudi Arabia. Trump also expressed delight for a $110 billion arms deal -- getting Saudi Arabia a "good deal from our great American defense companies." He encapsulated his foreign trip as a plan to visit the cradles of all three Abrahamic faiths: Christianity, Judaism, and Islam.

Before the fundamental problem with Trump positing Saudi Arabia as the "heart of the Muslim world" is laid out, let's give him the benefit of doubt for a moment. Saudi Arabia is, after all, home to Islam's two holiest mosques in Mecca and Medina. The former is the central point for pilgrimage in Islam — which is called Hajj — while the latter contains the burial site of the Prophet Muhammad. Subsequently, these two sites carry immense meaning for Muslims throughout the world. The Kingdom of Saudi Arabia serves as the "custodian" of these sacred sites. So Trump may have positioned Saudi Arabia as the "heart of the Muslim world" with those two sites in mind.

However, being the "custodian" does not mean being the "heart" or center of a population encompassing some 1.6 billion Muslims, who it's crucial to remember hail from different cultures, speak different languages, follow different customs, and much more.

Concentrating on Saudi Arabia as the center of Islam is not only geographically inaccurate (it's a gulf state in West Asia) and culturally impossible; it is also fraught with a ton of political imbroglios. For instance, Saudi Arabia's vicious and militaristic treatment of Yemen is seen as inconsistent with the principles of "ummah" — Arabic for "community" — the idea in Islam that places emphasis upon treating fellow Muslims with compassion and consideration.

Furthermore, non-Saudi Muslims have criticized the Kingdom's architectural interventions in the holiest sites, which is seen as disrespectful.

Culturally, Saudi Arabia simply cannot be the "heart" of the "Muslim world." Trump's positing of Saudi Arabia as the "heart" of the global Muslim population falsely associates "Muslim" with "Arab," whereas in reality, an Arab can also be a Christian, Jew, or even an atheist. The association is harmful because it stereotypes a massive population into a small box and conveniently forgets that only 15 percent of the "Muslim world" is Arab.

It comes down to a simple point. The fundamental problem with centering Saudi Arabia as the focal point of the supposed "Muslim world" is that it reduces a massive, complex, bustling, and frequently misunderstood faith and its adherents to an oversimplified template.

It's important to remember that the Vatican is not posited as the "heart" of Christianity, but rather a sacred point for Catholicism. Similarly, Israel is not seen as the "heart" of Judaism, but rather a modern nation-state created out of a Zionist movement, reflecting the philosophy of only one segment of complex Jewish thought. Lumping Christians with the Vatican or Jews with Israel omits the complexities of the followers of both faiths and are harmful reductions of their adherents.

In that way, Saudi Arabia is not and cannot be the "heart" of the Muslim world; it is a Sunni-majority, Arabic-speaking state ruled by Salman bin Abdulaziz's monarchy. It is only part of a complex world. A world of millions and millions of Muslim followers who follow different sects, speak different languages, submit to different traditions, and believe in different philosophies.