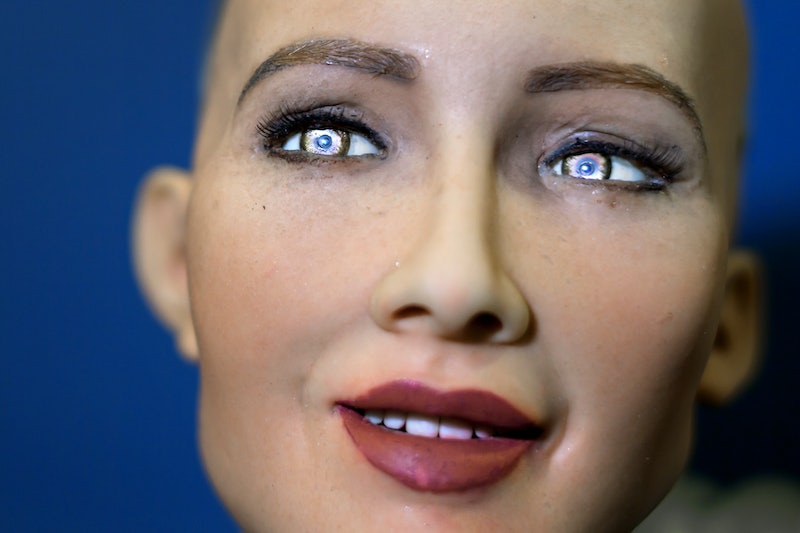 When Sophia the robot was given Saudi Arabian citizenship on Oct. 25, the move was meant to cement Saudi Arabia as a place for innovation in artificial intelligence, according to the Independent. But for some, Sophia's citizenship instead highlighted the human rights concerns related to Saudi Arabian women.

Sophia, who is programmed with artificial intelligence "designed around human values like wisdom, kindness, [and] compassion," was speaking at the Future Investment Initiative (FII) in Saudi Arabia's capital Riyadh when the moderator informed her she was officially becoming the first robot to receive citizenship. Considering Saudi women still aren't allowed to drive — though a royal decree has been put in place that will allow them to begin driving in June 2018 — and are strictly regulated in many other areas of public life, the irony of a robot who was presented as female being given citizenship, without the challenges many Saudi Arabian women face, has not been lost on the internet.

Social media users were quick to call out indications of Sophia's relative freedom: She was allowed to present onstage alone, without male guardianship, and didn't have to wear a hijab or abaya, which are compulsory for women in Saudi Arabia. As ABC News outlines, "Male guardians, often a male relative, must give permission before women can travel abroad, open bank accounts or carry out a host of other tasks — and they accompany women in public." Sophia has none of these things, as a robot, despite being gendered as female.

Sophia's citizenship also comes before the extension of citizenship to migrant workers who labor in Saudi, according to journalist Murtaza Hussain. "This robot has gotten Saudi citizenship before kafala workers who have been living in the country their entire lives," he tweeted.

Sophia may have the body language of a person and is already showing signs of self-awareness, but she still isn't human. The idea of lauding her citizenship as progressive when Saudi women live in 10th-worst country in the world for civil liberties and political rights, is setting plenty of folks' teeth on edge.

One person tweeted, as translated by ABC News, that they were curious if Sophia would need permission from a male guardian to get a passport. "Or is she special and able to handle the procedures on her own?" the tweeter asked.

Saudi Arabia's focus on artificial intelligence means this is likely not the last time the conversation about human versus robot rights will bloom. The traditions of the Saudi kingdom are coming face to face with the technological future, and the progress that comes with it.

And it isn't just an AI future the Saudi government is focusing on. The kingdom is investing $1 billion in the Virgin Group's space companies, and, according to Engadget, "will fund three companies within the Virgin Group, starting with Virgin Galactic, which is responsible for developing the VSS Unity (also known as SpaceShipTwo) designed to fly paying tourists to suborbital space." Saudi Arabia's Crown Prince Mohammad bin Salman also announced on Oct. 24 that the kingdom is investing $500 billion in a high-tech megacity similar to Dubai.

The incongruity of Saudi's forward motion in technology and its conservative, traditionalist laws is not lost on the people most affected. Saudi women's rights activist Aziza Al-Youssef championed a September 2016 petition which called on the Saudi government to end the guardianship system that Sophia has so far not been required to participate in. Al-Youssef's petition made waves in the country. Metro reported that "In April this year, King Salman announced that women would no longer need a male guardian’s signature to access new government services."

This small change, especially coupled with other victories like the 2018 end of the driving ban, could have a huge impact on women's quality of life in Saudi Arabia. Al-Youssef told Metro, "We hope [this is the beginning of the end of the system]. We’re hoping it will happen. Things have to change, because we can’t have this in 2017."

As for Sophia's rights, TechCrunch wonders, "Would Sophia’s citizenship hold up in court in some strange future legal precedent that will come back to haunt us 10 years from now?" As of right now, that's not looking impossible.