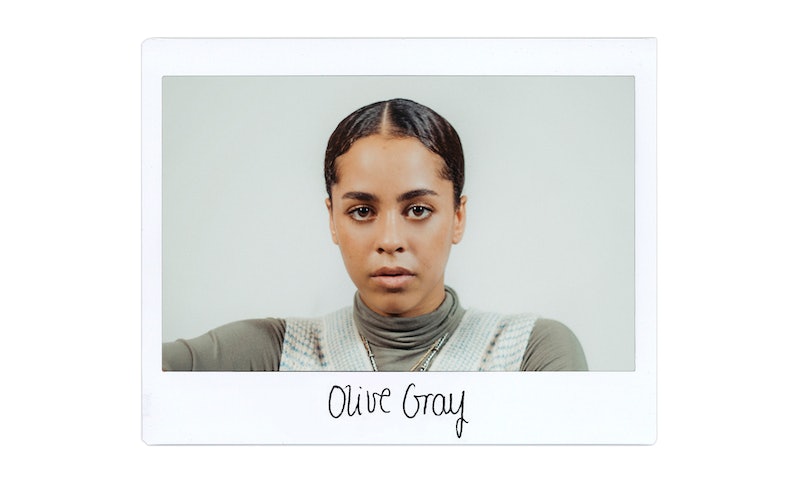 When celebrities hang out with Bustle writers, we want to give them the chance to leave their mark. Literally. So we hand them a pen, a piece of paper, a few questions, and ask them to get creative. This time, Save Me Too star Olive Gray takes on the Bustle Booth.

If asked what you wanted to be when you were growing up, the answer is quite likely to be different from what you're currently doing. Not, however, for Olive Gray. “It was always something I knew, intrinsically in me, that I wanted to act," she tells me. "I never imagined myself on stage or screen, and I know some actors say they imagine themselves winning an Oscar, but I wanted to explore other human beings.” Her parents Carrie and David Grant – the TV presenter and vocal coach duo, who you might remember from Fame Academy and Pop Idol – surely influenced this career path too.

Gray has taken on roles in Sex Education, Dark Money, and Teen Spirit over the last few years, but it’s her role in Sky’s Save Me Too – starring opposite Lesley Manville, Suranne Jones and Stephen Graham – that really made an impact on her. Returning to our screens for series two from April 1, Gray plays Grace, a victim of sex trafficking who was rescued at the end of series one. “This is my favourite role and it was the hardest role I’ve had to let go of when we finished [filming],” she says. “I’ve never experienced anything like it. I found it difficult to separate myself from Grace.”

Keeping her acting work varied is something Gray loves – she's also set to appear in Showtime's series adaptation of the video game Halo. “I’m so excited, I’m going to play the games," she says. "I knew a lot about the games before doing it, because when I was 18 I was in a relationship with a hardcore gamer who postponed our anniversary celebrations because the new Halo game was being released.” Let's put that one down to role research.

Save Me Too airs on Sky Atlantic from April 1, and all episodes are available to stream on NOW TV. Halo is set to be released on Showtime in 2021. And Olive Gray is also working on her first EP.