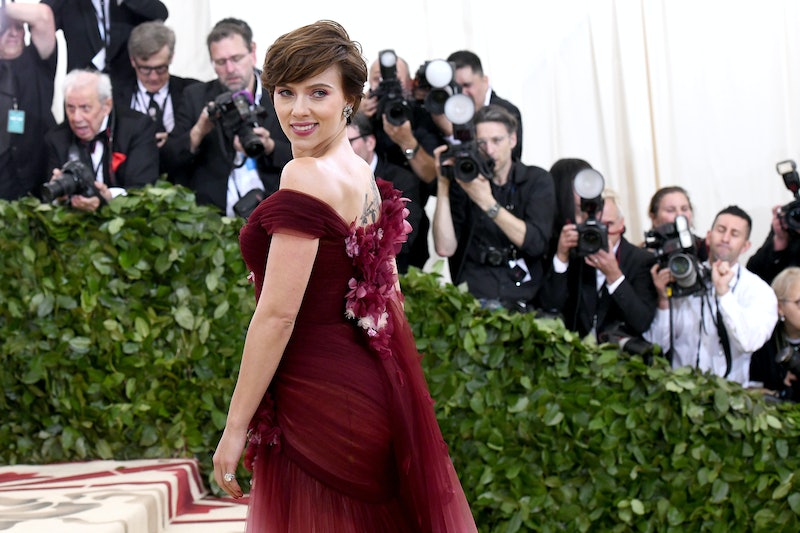 Announced in a statement provided to Out.com on Friday, July 13, Scarlett Johansson has dropped out of the film Rub & Tug. In the film, the actor was cast to play transgender man Dante 'Tex' Gill. In the statement, Johansson said:

In light of recent ethical questions raised surrounding my casting as Dante Tex Gill, I have decided to respectfully withdraw my participation in the project. Our cultural understanding of transgender people continues to advance, and I’ve learned a lot from the community since making my first statement about my casting and realize it was insensitive. I have great admiration and love for the trans community and am grateful that the conversation regarding inclusivity in Hollywood continues. According to GLAAD, LGBTQ+ characters dropped 40% in 2017 from the previous year, with no representation of trans characters in any major studio release. While I would have loved the opportunity to bring Dante’s story and transition to life, I understand why many feel he should be portrayed by a transgender person, and I am thankful that this casting debate, albeit controversial, has sparked a larger conversation about diversity and representation in film. I believe that all artists should be considered equally and fairly. My production company, These Pictures, actively pursues projects that both entertain and push boundaries. We look forward to working with every community to bring these most poignant and important stories to audiences worldwide."

Johansson's statement cited a 2018 GLAAD study about the lack of LGBTQA+ representation in Hollywood on-screen, which further illustrates why Hollywood seriously needs to improve onscreen representation. Rub & Tug chronicles the story of Gill, who ran a massage parlor as a cover for a prostitution business in 1970s and '80s Pittsburgh, according to The Hollywood Reporter. As described by The Hollywood Reporter, Gill did not identify as a cis woman. Gill "by modern definitions lived their life as a transgender man,” according to Them, which references Gill’s own obituary.

The project's announcement on July 3 was followed by backlash over Johansson's role, since she doesn't identify in the same way as the character. Later that day, Johansson's rep issued a statement addressing the backlash to Bustle: "Tell them that they can be directed to Jeffrey Tambor, Jared Leto, and Felicity Huffman's reps for comment."

Following Johansson's statement to Bustle, prominent Hollywood activists spoke out about the statement and the casting. Transparent's Trace Lysette tweeted, "Oh word?? So you can continue to play us but we can’t play y’all? Hollywood is so f*cked... I wouldn’t be as upset if I was getting in the same rooms as Jennifer Lawrence and Scarlett for cis roles, but we know that’s not the case. A mess."

#OscarsSoWhite creator April Reign criticized Johansson's decision to take the role, tweeting, "Scarlett Johannson [sic] is not hurting for money. She is in the Marvel Cinematic Universe and is about to get her own film: Black Widow. She is also a well-established actress so she doesn't need the increased profile. So why would she take work away from a trans actor?"

When Johansson announced she'd be leaving the project, audiences immediately took to Twitter to share their thoughts, and they're very polarized. Some believe it was the right call, even if they're still critical of the choice to begin with.

Some, however, feel like the actor was "bullied" out of the role.

And others are still critical of the actor despite her decision to withdraw from the project.

Needless to say, the announcement is sparking major conversation on Twitter and beyond about how Hollywood casting.

More like this
Stormzy Made A Passionate Speech About The Importance Of Diversity
By El Hunt
Pro Footballer Zander Murray Is "Blown Away" By Support After Coming Out
By Sam Ramsden
After 'Hocus Pocus 2', The Sanderson Sisters Are Coming to Broadway
By Radhika Menon
Lin-Manuel Miranda & Tituss Burgess React To 'Little Mermaid' Casting Backlash
By Radhika Menon
Get Even More From Bustle — Sign Up For The Newsletter