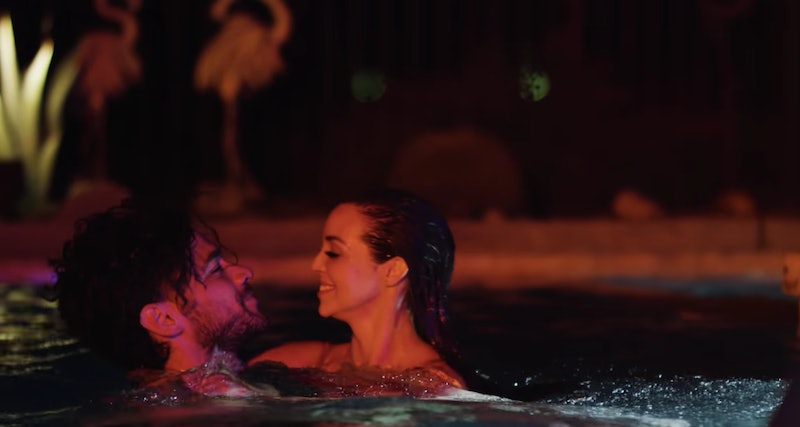 Sexy is one word to describe Scheana's music video with Brett. Uncomfortable is another.

Scheana released the video for her new single "One More Time" on May 4, one day before the episode of Vanderpump Rules in which she and Brett filmed it aired, and apparently, it caused some drama. Brett agreed to be in the video as a favor, but he ended up getting a lot more than he bargained for. No clothes were required, but plenty of simulated sex was (maybe even enough to make LVP jealous).

Brett told Dayna this made him feel "violated" — mainly while Scheana "was biting and licking the f*cking earwax" out of his ear. Once Scheana got wind of what Brett said, she confronted him at Kristen's pop-up event, and the two almost came to blows. Ultimately, Scheana told Brett that he didn't need to film the final scene if he was uncomfortable, then stormed off.

Some of the more salacious moments they filmed didn't actually end up in the video, like the fake thrusting and booty-jiggling seen on the show. The ear-biting, however, did make it, as did a moment in which Scheana bites the skin of Brett's forearm (???) that may end up haunting me for the rest of my life.

Elsewhere in the video, Scheana scrolls through "Scheanagram," does some sexy choreography with two backup dancers (sadly, Ariana wasn't one of them this time), and sets off into the night with a mysterious biker dude for no apparent reason. Was he just a fill-in for Brett after Scheana said he didn't have to film that last scene? Is he supposed to be her boyfriend? Her Uber driver? These are the important questions, and the ones I'm choosing to focus on while burying the image of Brett's forearm as deep as my brain will allow.