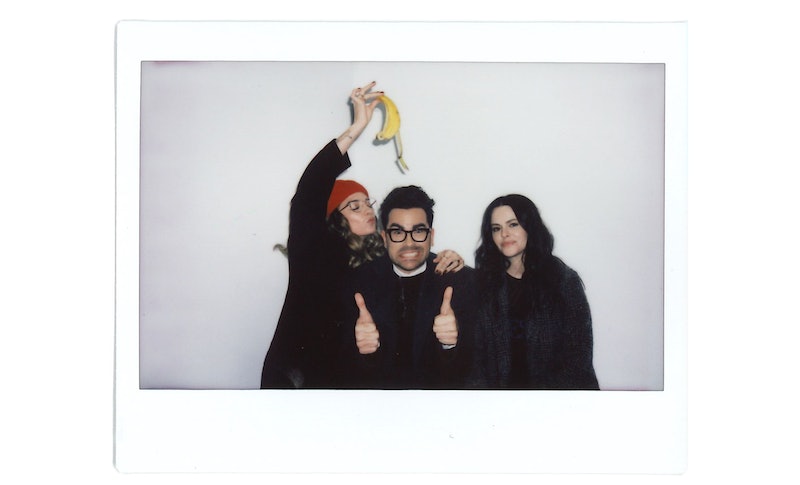 When celebrities hang out with Bustle editors, we want to give them the chance to leave their mark. Literally. So we hand them a pen, a piece of paper, a few questions, and ask them to get creative. The rest is up to them. This time, Schitt's Creek stars Dan Levy, Annie Murphy, and Emily Hampshire are leaving their mark in the Bustle Booth.

"Sorry. I needed a good cry," Dan Levy says, wiping away tears. We've been speaking for less than 10 minutes, and the initially upbeat and goofy vibe of the conversation has given way to an unexpectedly emotional one. Sitting at a long table in Bustle's offices, his Schitt's Creek co-stars Annie Murphy and Emily Hampshire are quick to come to his aid with words of encouragement.

Thankfully, these are tears of joy, not sadness, as Levy has just finished recounting the moving email he recently received from a fan, who wanted to thank him for his show's warmly romantic depiction of his character David Rose's same-sex relationship. The letter writer was a mother who praised the show for giving her new perspective on raising her 19-year-old son, who recently came out to her.

"The fear around her son’s coming out was rooted in how he would be treated in society," Levy explains, choking up. "And in their family watching the show, they were able to see that he can have a love-filled life that is not going to come at some huge cost — she doesn’t have to worry quite as much as she had thought. And that was quite a special note to receive."

It might come as a surprise that a show that started as a riches-to-rags comedy about a wealthy family who loses everything and seeks refuge in the titular town they once bought as a joke has grown through its five seasons to include moments so genuinely touching that they arguably change lives. But Levy, who co-created and stars in the show with his father, the comedy legend Eugene Levy, says that Schitt's Creek was built on kindness and empathy. Peeling back the layers of these characters — who can still make you belly laugh with their entirely serious delivery of made-up words and over-the-top reactions — as they learn and grow from that experience was always the plan.

The Rose family may not have initially been deserving of our sympathy for losing their fortune, but the townspeople of Schitt's Creek welcomed them anyway. And that gesture of goodwill and acceptance has led each of these incredibly flawed narcissists — the bumbling former businessman Johnny (Eugene Levy), the maudlin former soap star Moira (Catherine O'Hara), the flighty socialite Alexis (Annie Murphy), and the prickly gallerist David (Dan Levy) — to slowly discover new sides of themselves.

For Levy's David, that's meant learning how to navigate the expectations of a healthy relationship and discovering what really goes into running his own business. Murphy's Alexis, meanwhile, has grown from a spot-on, if one-note parody of a name-dropping socialite with an unintended catchphrase into a multifaceted woman whose flaws still exist even as she develops more professional ambition and empathy for others.

"She's become a really fully fleshed out human being who no longer finds meaning through a boy or a yacht or a piece of clothing," Murphy says, her voice devoid of Alexis' signature vocal fry. "She’s finding her independence, and I think that’s something she’s been kind of longing for and hasn’t really realized."

The only main character who has yet to be affected by the wave of personal growth this sh*tty town has inspired is Hampshire's Stevie, the sardonic motel employee who goes into business with Johnny. But in keeping with her character's signature blasé mood, that's been OK with Hampshire so far. "I love coming in in the morning, going into my trailer, taking off my black converse and putting on Stevie’s black Converse, taking off my baggy jeans, putting on Stevie’s baggy jeans, and putting her plaid shirt on and then just being able to sit easier in my own skin," Hampshire says. "I feel like I can take a vacation in Stevie from myself."

But that may not last much longer, as Levy promises plenty of growth ahead for Stevie this season. "We will get to see Stevie make some big life decisions about how far she wants to step outside of her comfort zone," he says cryptically. "I think the payoff is gonna be quite, quite special for people."

Watching a family of narcissists slowly become better people really shouldn't be this funny and emotional. If you believe comedy comes from conflict, it would stand to reason that the more the Roses work on bettering themselves, the less funny Schitt's Creek becomes (though that certainly hasn't happened yet). Levy wholeheartedly disagrees.

"It’s the biggest challenge, and it’s the most rewarding part of our show. I think it’s why people have such a strong emotional tie to it — because we’ve managed to create comedy out of love, and I don’t think that’s an easy thing," he says. "I think it’s a doable thing, and I think it’s something that people should do more of."

Even if they did, there would still only be one show as singularly offbeat, hilarious, optimistic, and warm as Schitt's Creek.

Check out Dan, Annie, and Emily's answers to our Bustle Booth questionnaire below — and their antics on Schitt's Creek on Wednesdays at 10 p.m. on Pop.

More like this
On 'The Handmaid’s Tale,' Christine Ko Fights Back
By Gretchen Smail
Ismael Cruz Córdova Loves His Elf Ears
By Morgan Leigh Davies
'Elite' Season 6 Is Arriving Sooner Than You Think
By Gretchen Smail and Grace Wehniainen
What’s New On Netflix: Ana De Armas’ 'Blonde' & A Nick Kroll Special
By Arya Roshanian
Get Even More From Bustle — Sign Up For The Newsletter