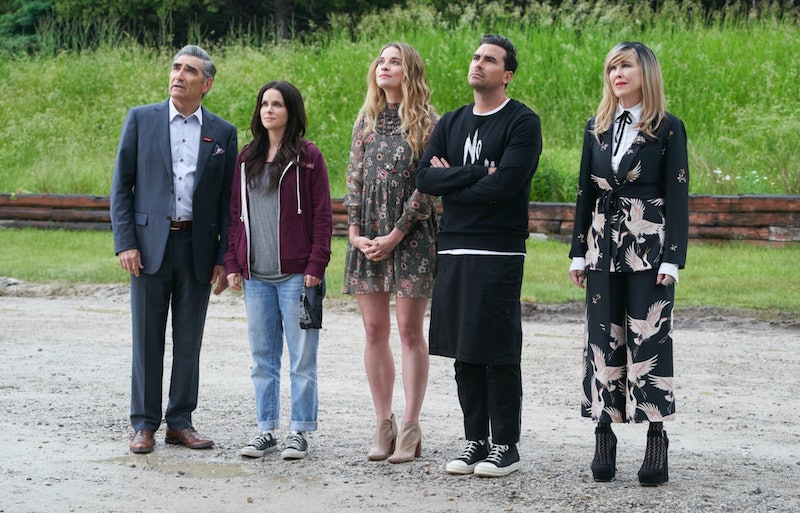 Schitt's Creek has been on for years now, but thanks to the help of a fervent fanbase, plus a presence on Netflix and social media, it seems like you see it mentioned or memed every time you refresh Twitter these days. Luckily for those who can't get enough of Moira, Johnny, David and Alexis, Schitt’s Creek Season 5 will premiere before you know it. According to TVLine, Pop TV announced that Season 5 will debut on the network on Wednesday, Jan. 16 at 10 p.m.

That's a short break in the larger scheme of things, as the Christmas special airs just a month before on Dec. 19. And according to the network, there will be plenty of drama and laughs to look forward to. The official season description from Pop TV, as reported by TV Line, hints that the Rose family still has a tumultuous road ahead despite their growing comfort in the town of Schitt's Creek.

"The Roses are finally thriving in Schitt’s Creek and find themselves ready to take their personal relationships and business pursuits to the next level," the description reads, adding that Moira finds a "renewed sense of purpose," Johnny struggles to manage the motel staff, David and Patrick's relationship continues to flourish, and Alexis toys with leaving town.

Eugene Levy, who co-created the show and stars in it with son Dan Levy, said he's excited to see fans continue to find his show, which he deemed "the little engine that could." Pop TV was the network that looked at our pitch and said, 'Yes, this is what we want to do,' so we're very grateful to Pop. But I'm noticing, just traveling around now, that more people are coming up and talking about Schitt's Creek and how much they love it," Eugene Levy told TVLine’s Michael Ausiello at an Emmys event, per Deadline. "I'm really flattered that the core of people that are watching our show are so fanatic."

Star Annie Murphy told Vulture she's noticed more excitement than usual brewing this year for the show. "It’s so cool to watch it start snowballing. People are still coming out of the woodwork who haven't heard about it," she said. "All of a sudden they [marathon] it over a weekend, and they're in. Keep [marathoning], everyone!"

The series focuses on the Rose family, who struggle to adjust to a new life in Schitt's Creek after being busted for tax evasion and losing their fortune. Their possessions, as well as their luxurious lifestyle, are gone baby gone, and the deed to the tiny town is all they're left with. They're hilariously out of place and out of touch, but over the years have inched their way toward making the town their home.

Season 4 of the show has a 100 percent positive score among critics on Rotten Tomatoes, and a 98 percent positive score among audience members. And buzz surrounding it just continues to build. Vulture's Maggie Fremont wrote in her aptly named essay "Why Aren’t You Watching Schitt’s Creek Yet?" that any viewer who isn't tuning in yet is sorely missing out. And Caroline Framke wrote for Vox earlier this year that the show has "become far and away one of my favorite comedies to throw on after a long day, because I always know it will deliver."