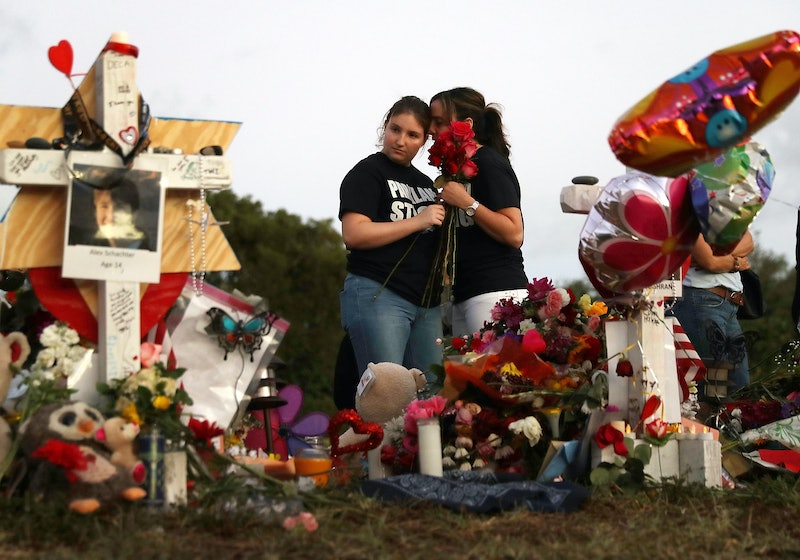 Despite increased attention on gun violence after deadly mass shootings in Parkland, Las Vegas, and Pittsburgh last year, Congress still hasn't passed major legislation aimed at combating the problem. But a group of students at the Temple Emanuel synagogue in Kensington, Maryland hopes to change that. The teens are creating a yearbook for school shooting victims that they're calling a "Yearbook of the Fallen," and they're going to use it to lobby Congress, WRC-TV reports.

Sixteen-year-old Eden Shane is spearheading the effort, along with four other teens at the synagogue, according to WRC-TV. They're working together to research, design, and produce the booklet, and plan to make at least enough copies to send to all 535 legislators on Capitol Hill. The House passed two major gun control packages in late February, but they're not expected to go anywhere while Republicans control the Senate.

Referring to a federal bill that would mandate background checks for nearly all gun purchases, Shane told WRC-TV that she wants it to become law so that she's "not nervous anymore." She and her friends hope that the yearbook will encourage members of Congress to devote more energy to addressing the problem.

Annual yearbooks can be a source of mixed emotions in towns that have experienced school shootings. The yearbook organizers at Marjory Stoneman Douglas High School in Parkland, Florida, chose last year to use the book to emphasize both the massacre that killed 17 students and staff members as well as the "normal" parts of the year. According to The New York Times, they devoted a two-page spread to the very beginning of the day on Feb. 14, 2018, the last moments before a gunman entered campus and changed their lives forever. They also designed a spread for each student victim.

The "Yearbook of the Fallen" that Temple Emanuel teens are creating will include the victims from Parkland, as well as all other students who died in school shootings last year.

Estimates for the number of these shootings that occurred in 2018 vary — in part based on whether or not to include suicides — but they all show that gun violence in schools was extraordinarily frequent. Education Week counted 24 school shootings that led to 35 deaths, 28 of whom were students. The Center for Homeland Defense and Security's tally is far higher, finding that 56 people died from school shootings in 2018.

Gun violence is poised to be a significant issue for Democrats as they prepare to choose a presidential nominee for 2020. The leading candidates are all in favor of stricter firearm laws, according to Pacific Standard, including measures like an assault weapons ban and expanded background checks.

Rep. Eric Swalwell of California entered the race this week and intends to make gun violence the single focus of his campaign. He's advocating for banning assault weapons and getting the federal government to buy back the 15 million that are already in circulation, per CNBC.

Temple Emanuel students are eager for the day that new legislation finally comes to fruition. "I think that every person, every student, deserves to feel safe," Shane told WRC-TV.