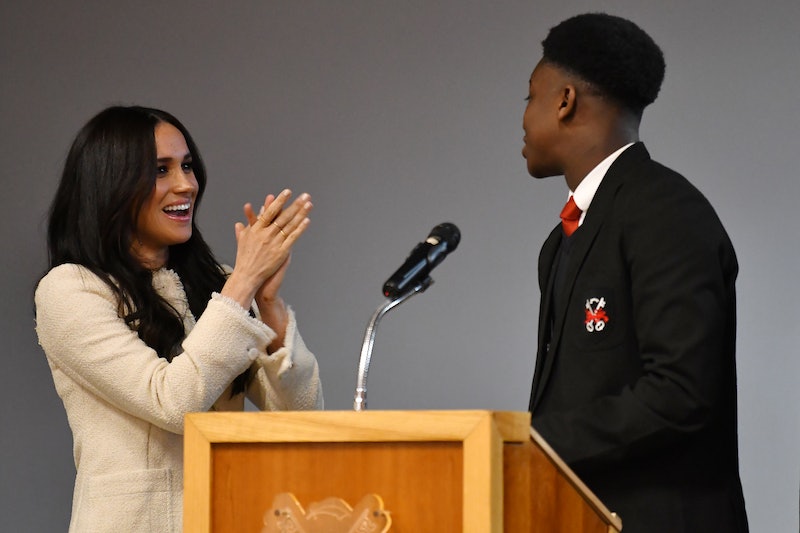 To mark International Women’s Day, Meghan, Duchess of Sussex made a surprise visit to Robert Clack Upper School in Dagenham on Mar. 6. After giving a speech during assembly, Meghan Markle asked: "if there is one brave man in this room who wants to come and say what he thinks the importance of International Women’s Day is." Step forward Head Boy Aker Okoye. The confident teenager came on stage and stepped up to the mike. But before he made his speech, he couldn't resist giving the Duchess a cheeky compliment, telling the audience of students: “She’s really beautiful, innit?”

Markle seemed amused at the comment, clapping her hands and laughing, while students in the school hall cheered. 16-year-old Okoye then spoke eloquently about how women uphold society, urging his male classmates to appreciate women, not objectify them. “I just want International Women’s Day for all of us to be a reminder of how strong our community is with women inside.” As Okoye concluded, Markle opened her arms wide, pulling him in tightly for a big hug. Clearly, not one to let a great moment pass him, the teenager widened his eyes with glee at the embrace before heading offstage.

Dagenham has particular significance when it comes to empowering women, as in 1968 sewing machinists in the London borough went on strike for equal pay, which led to the establishment of the Equal Pay Act. During her visit to Dagenham, Markle met Geraldine Dear, a former striker. She also recognised Dear and her fellow strikers' achievements in her speech, telling students. “Being in Dagenham is incredibly profound. Because as you can see with Geraldine and the other women who had the strength to really stand up for something that they knew needed to be done.” She continued, “This is the best example of no matter how small you might feel, how low you may feel on the ladder...you have a voice, and you certainly have the right to speak up for what is right.

One of her last public engagements as part of the Royal Family, Markle's visit was clearly a big hit among students at Robert Clack school, many of whom, per an ITV News report, couldn't believe they were meeting her. As for Mr Okoye? The 16-year-old wrote a letter to Prince Harry addressing his encounter with Markle. He wrote: "hope you didn't mind me cuddling your wife," and went on to say, "It was a pleasure to hear her speech and speak in front of her...She is truly inspirational."

More like this
Twitter Can’t Get Over This One Part Of Lily Allen & David Harbour’s House
By El Hunt
Prince Harry Incorrectly Recites Christina Aguilera’s “Genie In A Bottle” Lyrics
By Jake Viswanath
Alan Carr's 'Changing Ends' Is A Witty Sitcom Based On His Own Life
By Darshita Goyal
Armani Jackson Is Following In His Famous Actor Sister’s Footsteps
By Catharina Cheung
Get The Very Best Of Bustle/UK
Sign up for Bustle UK's twice-weekly newsletter, featuring the latest must-watch TV, moving personal stories, and expert advice on the hottest viral buys.