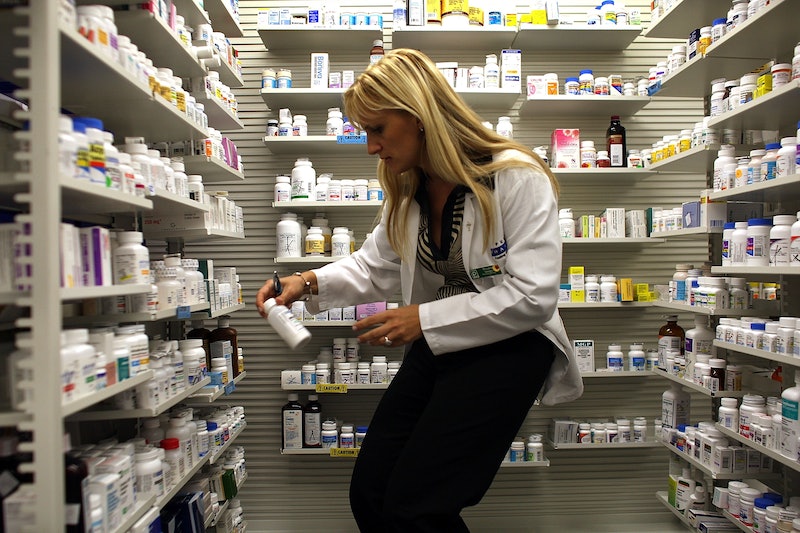 Soon, today's forms of medication — pills, potions, syringes, tablets and IVs — may be things of the past, if a new discovery from Danish scientists has its way. Researchers from the University of Copenhagen have come up with a way to use inkjet printing to make medication in the form of an edible QR (quick response) code. Yes, you read that correctly: You may one day take your drugs in the form of edible "paper" with a scannable barcode, that can give information about the medication itself, your specific needs, and other relevant data. This isn't an episode of Black Mirror: This is real life.

The history of human medication reveals that we've attempted to use basically everything to transfer medically useful ingredients into our bodies. Ancient Egyptian techniques for ingesting or applying medicine include "pills" of grease and bread, and medicinal zinc tablets were discovered in a ship that sunk over 2,000 years ago. More recently, intravenous therapy was first trialled in the 1830s as a treatment for cholera, and radiotherapy developed in the first decades of the 20th century. This new discovery may help push medication forward by marrying two needs — the requirement for medication to be effective, and the need to get the dosage and patient's needs exactly right.

The Danish technique, published in the International Journal of Pharmaceuticals, is very Willy Wonka. The scientists used a flexible edible surface and "print" it with the drug, in the form of a QR code. The QR code is tailored specifically to the person who's been prescribed the drug, and if scanned, can give information about the medication itself, how old it is, how much there is in the dose, what it's being used to treat, and relevant bits of the patient's medical history.

Once it's swallowed, the QR-coded edible substance dissolves and delivers the medicine effectively, with the same results as a pill. The Danish scientists found that QR codes can clearly printed with minimal "bleeding" on their surface, and that the codes are still legible for scanning even if the medication has been stored in haphazard ways (which is sometimes a problem for drugs being distributed globally).

The scientists behind the QR coding think their invention may be particularly helpful to detect counterfeit medicines. "It can potentially reduce cases of wrong medication and fake medicine," Assistant Professor Natalja Genina, who participated in the research, said in a press release. This targets a genuine worldwide issue: according to a 2017 report by the World Health Organization, 1 in 10 medical products being sold in low and middle-income countries are in some way fake or substandard, from medications with the wrong labels to drugs concocted with no active ingredients at all. In places without rigorous drug regulations or with flourishing black markets, it can be very hard to know you're getting what's actually listed on your medication bottle. Tailored QR codes could solve that issue — and they're also very cheap to produce. All you need to read a QR code is a smart phone. One day, the Danish researchers believe, regular office-style printers could be rigged to produce these coded medications, and that could reduce drug costs significantly.

Some places, like the Netherlands, already have an extensive QR code system on their medication labels so that people can scan them easily for information. This new method takes it a step further — and the results would also weigh less than tablets and be more easily personalized. That would be a particular boon for people who are on complicated combinations of drugs for chronic conditions. Instead of having to slice a standard 20mg pill in half to get a prescribed 10mg dose of a drug, or explain their entire medical history with different medications to a new clinician, they could have a custom-printed dosage with all their information at the ready.

There are privacy concerns with these sorts of inventions — what would prevent people from scanning a QR code on your medication before you take it in a cafe, and accessing your personal information and medical history? But, for the moment, it's an exciting dream that stands to make the future of medication very interesting — if a little like something out of a science fiction movie.