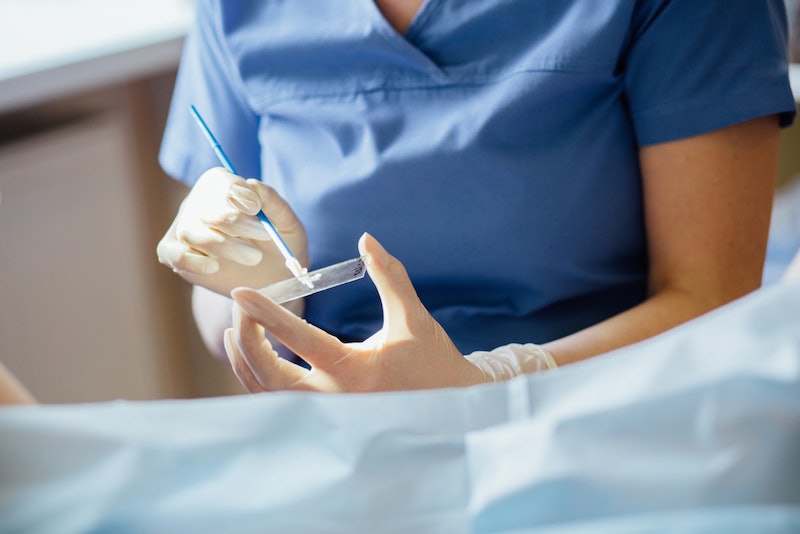 Sexual Health Awareness Week was celebrated last month and, along with raising awareness about STI tests and getting to know your body, campaigns aimed to tackle the taboo and fear surrounding smear tests. Now, scientists have reported that a cervical cancer 'cure' is closer than ever with the development of new gene-editing technology.

Researchers in Queensland, Australia, are claiming to have discovered the first 'cure' for cervical cancer, says ABC. Using a CRISPR-Cas9 gene-editing technology, which cuts away specific parts of DNA to alter cells and eradicate tumorous cells, they managed to "kill off" tumours present in mice.

Speaking about the results, the Lead Researcher and Director of Infectious Diseases and Immunology at The Menzies Health Institute Queensland Professor Nigel McMillan told ABC, “This is the first cure for any cancer using this technology.” The researchers hope that this technology could be rolled out for testing among human cancer patients by as early as 2024.

If this technology sounds super complicated, it’s because it is. Professor McMillan explained to ABC that he and his team have been working on this project for five long years.

In order to explain it, the team compared the treatment to a spell checking tool. They explained that the CRISPR-Cas9 was injected by nanoparticles into the subjects. These nanoparticles than targeted a gene called E7, which is found in cancers caused by the human papilloma virus. "We would then edit it by introducing some extra DNA that causes the gene to be misread and stop being made,'' Professor McMillan told ABC. "This is like adding a few extra letters into a word so the spell checker doesn't recognise it anymore. Because the cancer must have this gene to produce, once edited, the cancer dies."

There’s no denying that the findings and development are super exciting for the treatment of cervical cancer. However, it’s important to remember that this trial has still only been conducted on mice and there’s no way of telling for sure whether humans will react in the same way. Professor McMillan continued:

"There are still many steps to go through before we get to the clinic stage, but I think this really proves that gene editing is going to be proved to be useful."

The prospect of this new gene-editing treatment being able to be trialled on humans within the next five years is monumental. And Professor McMillan told ABC that the technology may be able to be used with other cancers "once [they] know the right genes" to target.