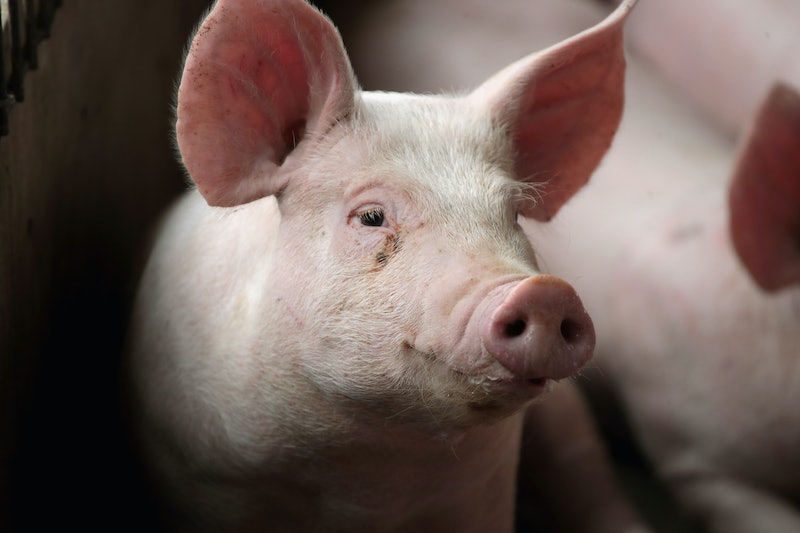 In what sounds like a storyline from The X-Files, new research from Yale University published in the journal Nature reported that scientists revived dead pigs' brain cells hours after death. In an experiment, researchers obtained a pig brain from a meatpacking plant that was already dead, circulated it with a special chemical solution, and discovered basic cellular brain function hours after death, Bill Hathaway reported for Yale News.

"The intact brain of a large mammal retains a previously under-appreciated capacity for restoration of circulation and certain molecular and cellular activities multiple hours after circulatory arrest," senior study author Nenad Sestan, professor of neuroscience, comparative medicine, genetics, and psychiatry, said in the story. Though this is certainly good news for the future of brain science, scientists stressed that despite some brain activity being present, the electrical signals necessary for normal brain function were not present.

"At no point did we observe the kind of organized electrical activity associated with perception, awareness, or consciousness," study co-author Zvonimir Vrselja, associate research scientist in neuroscience, said. "Clinically defined, this is not a living brain, but it is a cellularly active brain." So, no, you cannot bring brain cells back to life, and these aren't "zombie pigs."

While it's being touted as a zombie pig brain by some, there's no need to worry that this brain will come to life and seek human flesh for dinner. The pig will not reclaim its brain and turn into Sheila from Santa Clarita Diet.

Zombie jokes aside, this discovery paves the way for important research on brain development. "This line of research holds hope for advancing understanding and treatment of brain disorders and could lead to a whole new way of studying the postmortem human brain," Andrea Beckel-Mitchener, chief of functional neurogenomics at the NIH’s National Institute of Mental Health, which co-funded the research," told Yale News.

Further research is needed to determine whether or not scientists could achieve a similar level of brain activity by applying the same methods to a postmortem human brain. The chemical solution used to revive the pig brain reportedly contains compounds not native to the human body, and scientists stressed that any studies on humans would only be conducted under strict ethical oversight. They will not be creating any zombies.

In fact, researchers emphasized that their goal was never to bring a dead brain back to life, and were even prepared to stop that process if it were an unexpected outcome.

"The researchers were prepared to intervene with the use of anesthetics and temperature-reduction to stop organized global electrical activity if it were to emerge. Everyone agreed in advance that experiments involving revived global activity couldn’t go forward without clear ethical standards and institutional oversight mechanisms," study co-author Stephen Latham, director of Yale’s Interdisciplinary Center for Bioethics, said.

Being able to study the structure of a postmortem brain that displays some level of cellular activity may one day help doctors preserve brain function in stroke victims, Yale News reported. Because the brain is still largely a mystery, any advances in understanding how it works, both pre and postmortem, is an important step forward for modern medicine.