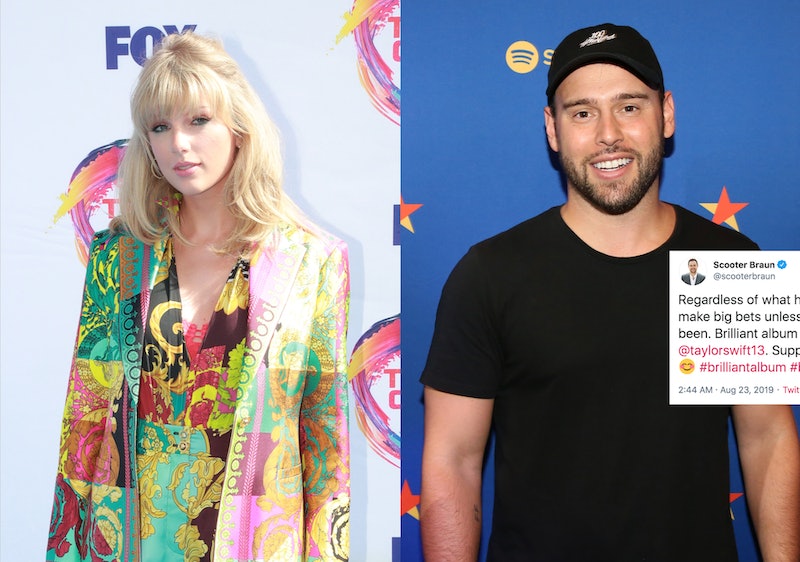 Shortly after its Aug. 23 release, Scooter Braun called Taylor Swift’s Lover album “brilliant” — and Swifties are so not having it. The record executive took to Twitter in the late hours of Aug. 22 to congratulate Swift on her new album Lover with the hashtags #brilliantalbum and #brilliantcampaign. “Regardless of what has been said the truth is you don’t make big bets unless you are a believer and always have been,” Braun tweeted. “Brilliant album with #Lover. Congrats @taylorswift13. Supporting was always the healthier option #brilliantalbum #brilliantcampaign congrats.”

Braun’s congratulatory message on social media did not sit quite well among Swift’s fans, however. It comes on the heels of Braun’s acquisition of Big Machine Label Group, which owned the masters of all of Swift’s earlier discography, back in June. Upon learning of the acquisition, Swift took to Tumblr on June 30 to express that she was “sad and grossed out” over Braun’s newfound ownership of her music catalog. She also accused Braun of "incessant, manipulative bullying” that she “received at his hands for years."

Elsewhere on social media, Scott Borchetta, the CEO of Big Machine Records who gave Swift her first record contract, offered his own congratulatory message for Swift. On Instagram, he shared a picture of a diary entry — seemingly written by Swift dated Nov. 5, 2004, and released as part of a special edition copy of Lover — that detailed her decision to sign onto Big Machine Records. In the note, Swift called Borchetta “passionate” about her work. Borchetta captioned the Instagram post, “And I still feel the same way today... congrats on another amazing release @taylorswift #Lover @bigmachinelabelgroup”

As of November 2018, Swift is signed with Universal Music Group’s Republic Records, where she now owns the rights to all music she will create under the label. (Lover marks the first album that Swift owns.) And on Aug. 22, the “Lover” singer revealed to Good Morning America in a televised interview that she plans to re-record her existing catalog with Big Machine Records in order to regain control of her old music. She told host Robin Roberts on GMA, “My contract says that starting November 2020, so next year I can record albums one through five all over again... I’m very excited about it. I think that artists deserve to own their work. I just feel very passionate about that.”

On Twitter, she echoed the same sentiments about owning Lover, her seventh studio album. “This album is very much a celebration of love, in all its complexity, coziness, and chaos,” she wrote. “It’s the first album of mine that I’ve ever owned, and I couldn’t be more proud. I’m so excited that #Lover is out NOW.”

Lover is out now. While the tracks are absolute bops, nothing slaps harder than ownership over what's rightfully yours.