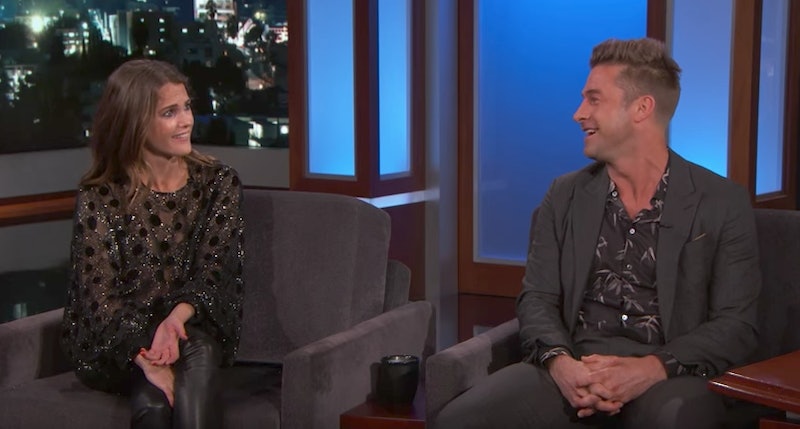 The year is 2017, the resistance is building, and Scott Speedman didn't like Keri Russell's Felicity haircut. The two actors were on Jimmy Kimmel Live on Tuesday night, and Speedman held nothing back when asked whether he'd realized that the haircut would be "so short and such a big deal." That's right, a full 15 years after the show went off the air, he's still talking about that fateful chop. And honestly? I think that officially makes it a success.

There's been a lot of controversy over the years about exactly what made Russell take the plunge in Season 2. When the snip session coincided with a ratings dip, the network powers-that-be claimed that Russell had impulsively cut her hair without permission — and even put a moratorium on haircuts for the rest of the cast. A WB executive named Susanne Daniels announced, "No one is cutting their hair again on our network." In reality, however, it seems that the drastic change was not only written into the script, but encouraged by Felicity creator J.J. Abrams. So the fact that it's still coming up in interviews almost two decades later is a victory, whether you like the pixie cut or not.

And the Ben to Russell's Felicity has been very clear that he was firmly in the not category.

"We were actually dating at the time, and I'd been such a disaster of a boyfriend up until that. And I knew I had to put on a good show," he said. "I was gonna see her new haircut, and I was like, 'C'mon man, you gotta bring it home, you gotta do it.' And I got to work, and she turned around the corner and my face sort of froze in a half-panic, half-smile situation... it just did not pull it off, and [she] called me on it. It was a Chia head [sic] sort of vibe to it."

If you can look past the delayed dig, this is actually a great indicator of just how important The Haircut was. Right in the midst of a show that was working, Abrams and Russell decided to take a big risk and see how it would pay off. The show was successful at the time, and, instead of sitting back and soaking it in, they decided to give a drastic haircut a shot. And guess what? Not a lot of people liked it. But almost everyone had an opinion on it. In a time before social media, the haircut was one of the most polarizing moments in television. And, a generation later, it still is.

For me, that's proof that Abrams and Russell's gamble paid off, even if Speedman, the network, and the fandom weren't on board. Felicity was a character all the more beloved because she made real-people mistakes. And sometimes real people get haircuts that everybody hates and that they even regret themselves.