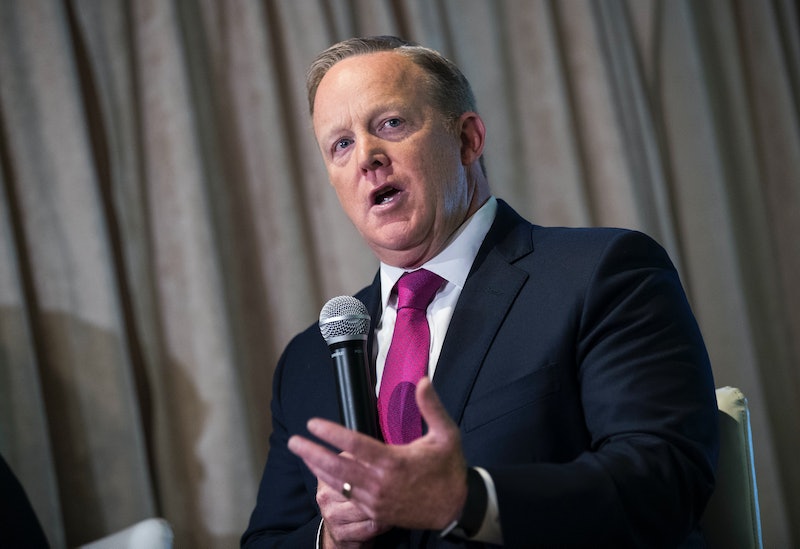 It's been a year and a half since President Trump's inauguration, but for some, the number of people who viewed the ceremony is still up for debate. One former Trump administration official, in particular, has continued publicly defending claims that the audience was the largest in presidential inauguration history. In an interview published in The Washington Post on Sunday, former White House Press Secretary Sean Spicer maintained that Trump's inauguration was the largest ever to take place, and explained why he believes that.

During the interview, The Post's Joe Heim asked Spicer if he could now "admit that Trump’s inauguration was not the largest in history," referring to what has evolved into a notorious bit of PR from Spicer's tenure working in the White House. Spicer responded that he could concede that the inauguration was not the largest if the question referred to "how many people were on the National Mall." He argued that his original statements, made at the time, were not precise enough.

"The easy answer is to say yes, but if you look at the statement that I actually made — and I will admit that we should have made it clearer — we should have focused on total audience size and not let people believe that we were talking about the Mall itself, I will concede that," Spicer said.

According to Spicer's interview with The Post, he hadn't intended to argue that the physical crowd size was the largest in history. He was, instead, referring to cumulative viewers who tuned into the program using technology that hadn't existed under the Obama administration.

"But where has any evidence been that suggests that I’m wrong about the total population that watched it? This isn’t a partisan thing," Spicer told Heim. "The bottom line is that there are platforms available today that weren’t available for Obama."

Back in January 2017, just after the inauguration, Spicer chastised journalists for how they covered Trump's inauguration size.

"This was the largest audience ever to witness an inauguration, period, both in person and around the globe," he said during his first post-inauguration appearance in the White House press briefing room. "These attempts to lessen the enthusiasm of the inauguration are shameful and wrong."

Though Spicer told The Post that he wasn't exclusively referring to physical crowd size during his post-inauguration comments, his remarks at the time did heavily emphasize why he believed images of those gathered may have appeared less dense than they actually were. He also claimed that "photographs of the inaugural proceedings were intentionally framed in a way, in one particular tweet, to minimize the enormous support that had gathered on the National Mall."

Spicer's claims grew to be a consistent talking point when discussing Trump's relative popularity as president, as well as the administration's desire to be viewed favorably. Approximately 18 months later, they're still making headlines.

Spicer's remarks to The Post come just days before the release of his new book, The Briefing: Politics, The Press, and The President. Spicer will be embarking on a book tour to promote the publication, and will likely have to address his inauguration size comments as he makes his way around the country.