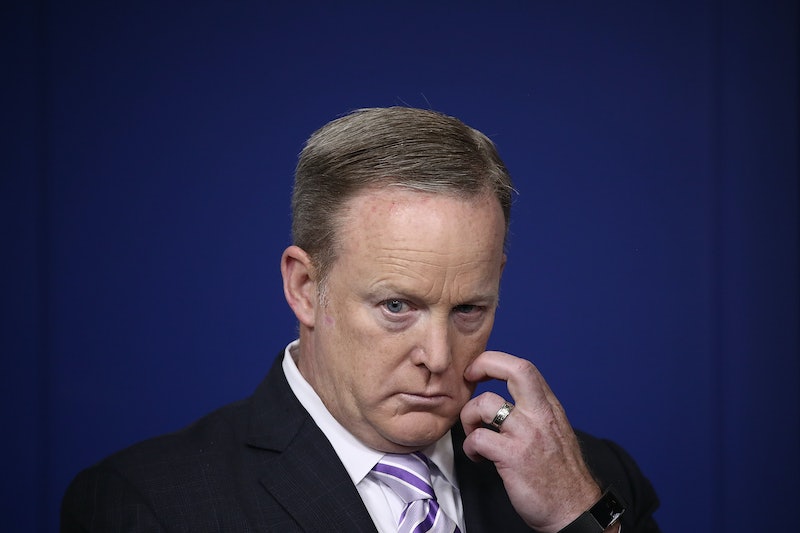 Poor Sean Spicer. The ever-beleaguered White House press secretary, who has one of the most thankless jobs in the administration, apparently had only one wish from President Trump's foreign tour. Yet, when the opportunity arose, he was nowhere to be found ― Spicer didn't get to meet Pope Francis, despite reports that he really wanted to.

As CNN detailed on Wednesday, Trump's visit with Pope Francis included a small entourage, consisting of his wife, Melania; his eldest daughter, Ivanka (also an official presidential adviser); his son-in-law, Jared Kushner; Secretary of State Rex Tillerson; State Department Aide Brian Hook; National Security Adviser H.R. McMaster; his longtime aide Hope Hicks; and his longtime bodyguard Kurt Schiller. Spicer, a Catholic whom White House sources claimed was quite excited about meeting the pontiff, was notably absent from the lineup despite being on the trip.

Specifically, CNN reports that a source "close to the White House" said Spicer's absence should "very much" be seen as a slight against him, and included a truly sad, melancholy line about the snub: "Wow. That's all he wanted."

Needless to say, a chance to meet the pope would be a big deal to almost any practicing Catholic. Beyond simply being the leader of the Roman Catholic Church, the pope is considered to be the Vicar of Christ on Earth, and when speaking in his official capacity on some elements of church doctrine, Catholics believe he possesses papal infallibility. There really isn't a bigger or more significant meeting that a devout Catholic could dream of, at least not on this earthly plane.

And according to CNN's report, it sounded like Spicer really wanted to go. Yet, when the Trump crew arrived for the meet-and-greet, he was conspicuously absent. Assuming that he wasn't shy or reluctant to voice his desire to the commander in chief ― it's impossible to say for certain, since he declined CNN's request for comment ― and that he wasn't kept from attending due to unforeseen circumstances, there are really only a couple of conclusions left to draw.

The chief assumption is that Trump either didn't care enough to bring Spicer along, or actively wanted to deprive him of the once-in-a-lifetime opportunity. Whatever you think of Spicer ― and obviously, progressives have plenty of reason to not like him, given his role as the public-facing front man for this administration ― that's pretty cold.

In other words, if you have even one spare tear to shed for a press secretary who tends to play pretty loose with the facts, send poor old Spicer your thoughts — and if you're similarly religious, your prayers. After all, it's probably going to be a long, excruciating flight home knowing he so narrowly missed his meeting with Pope Francis. And unless a resignation or a firing is imminent, it's almost assured that this won't be the last indignity he's going to endure.