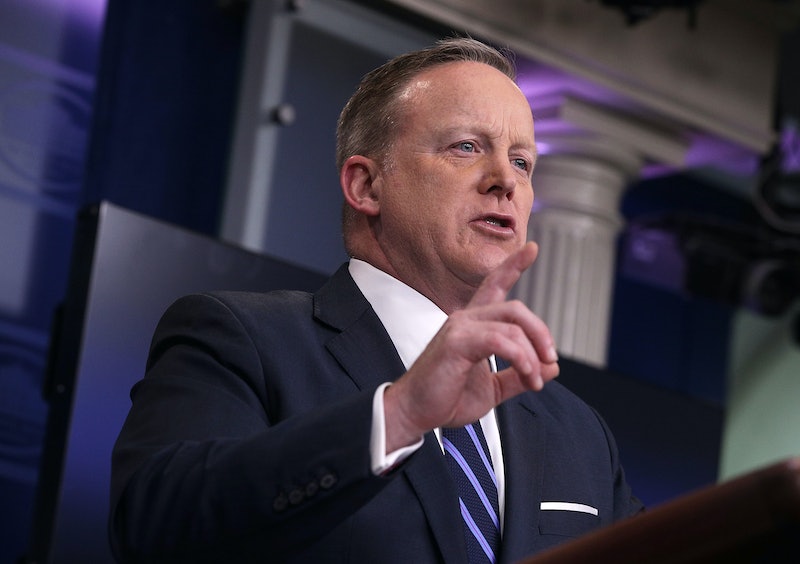 On March 7, White House Press Secretary Sean Spicer did something that's even bizarre for him: he clarified and fact-checked a claim made by President Donald Trump in a tweet that has been proven false. The president's (now-debunked) claim that 122 Barack Obama-released Guantanamo prisoners went back into battle is misleading at best, but the fact that Spicer seemed to correct Trump is a far more intriguing development than yet another incorrect claim from the White House.

Trump's claim appears to stem from a Fox & Friends report that failed to distinguish between the 121 Gitmo prisoners released during Obama and George W. Bush's presidencies that reentered combat — eight from Obama's presidency and 113 from Bush's. In response to questions about the allegedly misleading nature of the claim, Spicer uttered words that no one ever expected to come out of his mouth:

Obviously the president meant in totality the number that had been released.

The press secretary's correction was subtle, but presents a striking example of the sort of cleanup Trump staffers have to do when their president fires off un-vetted tweets. With the necessity for aggressive political fact-checking from journalists, it may make sense to add "presidential fact-checker" to Spicer's resume.

Spicer's correction was by all means soft, and he didn't purport to know better or to be censuring the president in any way. Still, the fact that he needed to clarify a broad and erroneous claim made by the president on Twitter is further proof of the disorganization of the White House, and a sad reminder that not only do the president's handlers regularly lose their grasp on him, but that he needs handlers in the first place.

Despite the correction, Trump's allegedly misleading tweet remains on both his personal and presidential Twitter accounts, and both have been retweeted tens of thousands of times. Whether or not the conflation of Obama and Bush's released prisoners was intentional, there are now tens of thousands of people who may very well believe that Obama released hundreds of terrorists back into battle — the same people that might also believe the 44th president is attempting to stage a coup. I don't know whether or not those people pay attention to the minutia or implications of the White House's daily briefings, but feel safe in concluding that no matter how erroneous Trump's claim, the damage is already done.