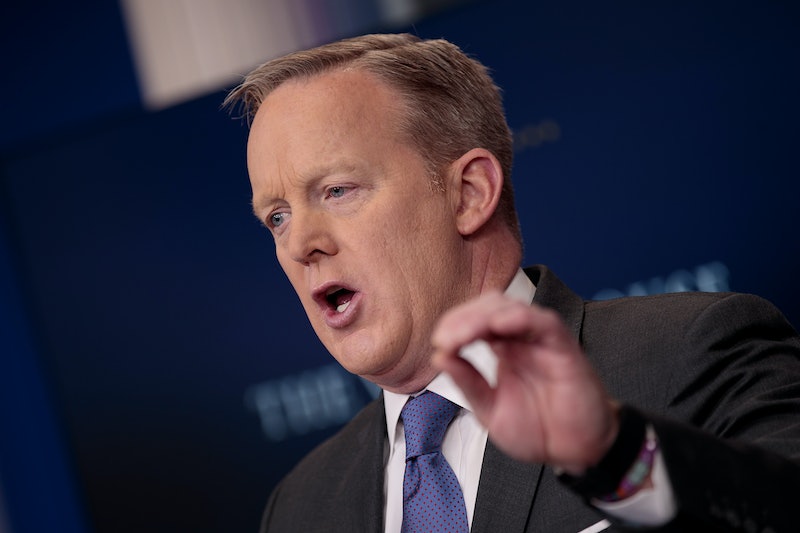 The former White House press secretary is no stranger to making headlines for the things he says. Keeping that seemingly unintended tradition alive, Sean Spicer commented on Donald Trump’s alleged affairs, suggesting it was not the public's business.

In an interview on NBC News’ Access Live, Spicer was asked about Trump's alleged extramarital affairs with multiple women (which the president has denied), and he responded that any matter related to Trump’s alleged unfaithfulness was “between him, his wife, and his God.” Spicer went on to say, “We are rushing too quick to judge people in society.”

Spicer's remarks came after the show’s co-anchor, Natalie Morales, asked him, “The Republican Party stood for family values. And if our president is the philanderer-in-chief, don’t you think the American public deserves to know that?” It was at that moment that Spicer told Morales that it was a subject best left to the president, the first lady, and well, God.

Morales' guest anchor, Mike Catherwood, pressed on. “But don’t you think you give up that ability to keep it between your wife and your God when you become president of the United States?” he said.

Spicer replied, "Not if it didn’t happen while he was in office.”

"That absolves him of all guilt?" Morales asked, to which Spicer responded: "Again, I think that’s between him and his wife, what he may or may not have done. Or what he said he did or didn’t do."

The former press secretary seemed pleased in spite of the questions. After the show, Spicer shared a set of photos of himself alongside Catherwood and Morales on Twitter — and tagged the wrong Natalie Morales.

In spite of Morales and Catherwood pressing Spicer to give a definitive answer on the matter, the former White House press secretary repeated himself: he believed that the issue was between Trump and his wife.

After that, Morales asked Spicer how the Republican party had changed over time. “Every president puts their stamp on the party while they’re in the office," Spicer said. "You saw that with Clinton; there’s a bit of a shift to the right with the Democratic party. Obama tended to take the party to the left. I think if you’re a Republican or a conservative, you look at Trump in terms of the accomplishments.” Apparently, according to Spicer, the judiciary, economy, and immigration system are doing well under Trump.

Spicer added that the president had covered a “ton” of issues on the conservative agenda. "So if you're result-oriented, which I think most Republicans are focused on, are we actually getting things done that we set out to or the president promised to do as a candidate? Then I think you're pretty happy," he said. Here's the clip of Spicer's exchange on Access Live.

For the rest of the interview on NBC News, Spicer continued praising the president and his supposed accomplishments across the domestic and foreign forefront. Although Spicer said he did not plan on going back to the White House — citing the "emotional toll" the job takes on one — Trump can still find a loyal fan in his former press secretary.