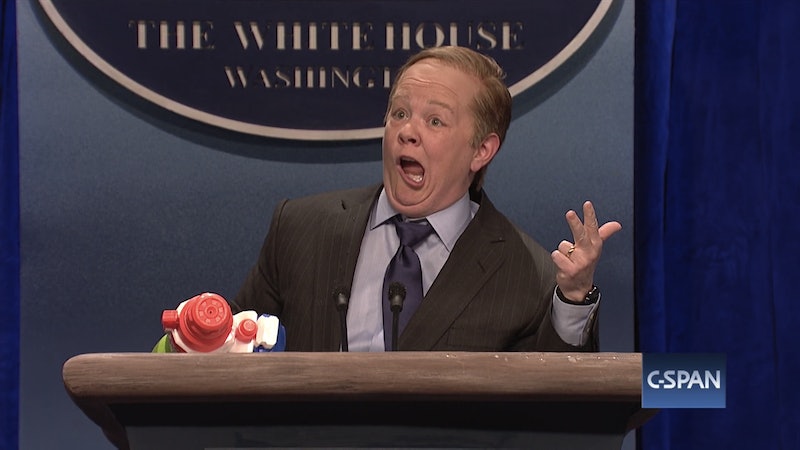 Melissa McCarthy cheered up millions of people by making an appearance in the latest episode of Saturday Night Live to parody White House Press Secretary Sean Spicer's press conferences. Unlike President Trump, who has made no secret of how much he hates being the subject of the show's mocking performances, Spicer initially described SNL's skit as "cute" and "funny" during an interview with Fox & Friends on Sunday.

This seemed restrained for Spicer, and it was: In an interview with Extra that same day, he took things a step further, going on to suggest that McCarthy "could dial back" her impression and criticized Alec Baldwin's portrayal of the president for being "mean." This is still light years away from Trump's angry response to SNL: "Not funny, cast is terrible, always a complete hit job. Really bad television!" he wrote on Twitter in mid-January.

Throughout the SNL spoof this past weekend, McCarthy's Spicer addressed the crowd of reporters by shouting everything, announcing that he was there to apologize to himself on their behalf (and then rejecting said apology), and using a squirt gun to douse a journalist with soapy water to wash his "filthy, lyin' mouth."

Though the skit obviously exaggerated Spicer's mannerisms (because, satire), his confrontational demeanor and use of logical fallacies during press conferences was lampooned in a way that effectively exposed their ridiculousness. SNL Spicer berates New York Times reporter Glenn Thrush for pointing out that Spicer and President Trump had both used the word "ban" in reference to the executive order barring visitors and refugees from seven predominantly Muslim countries.

In the skit, Spicer claims both he and the president were only quoting "false reports," using the term the real life Spicer did the same.

Not only did McCarthy parody actual arguments from Spicer's battles with the press, her defensive take on Spicer's demeanor were spot on. Spicer has repeatedly gotten into heated back-and-forths with reporters, saying things like, "Are you calling [Department of Homeland Security Secretary John Kelly] a liar?"

The SNL segment also spoofed President Trump's repeated insistence that CNN provides "FAKE NEWS" by showing a journalist from the network wearing a diaper and trapped in a cage, yelling "WE'RE NOT FAKE NEWS!"

When it came to the comedy show's takes on the president, Spicer had nothing positive to say. "Alec has gone from funny to mean, and that's unfortunate," he told Extra. "SNL used to be really funny. There's a streak of meanness now that they've crossed over to mean."

Trump unsurprisingly didn't appreciate the latest skit, which portrayed him as a puppet being manipulated by his advisor Steve Bannon. "I call my own shots, largely based on an accumulation of data, and everyone knows it," he tweeted. "Some FAKE NEWS media, in order to marginalize, lies!"

Well, whether or not Trump and his surrogates enjoy SNL's jokes, the public will surely continue to laugh.