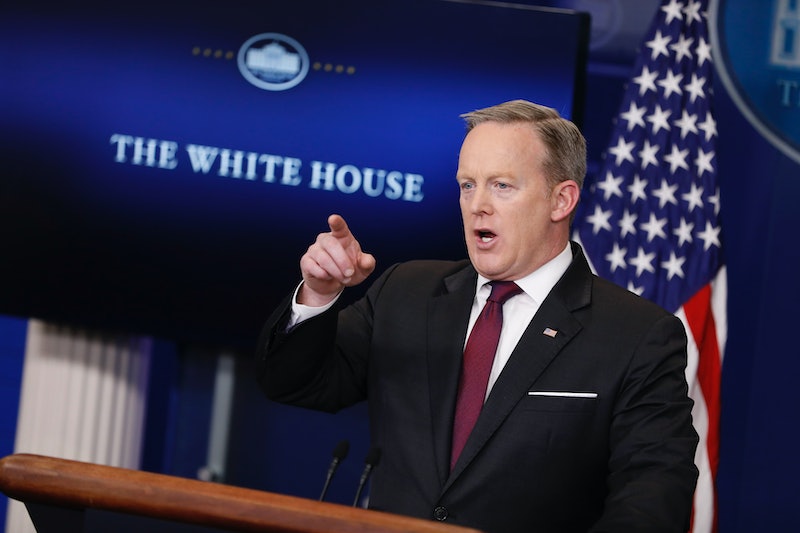 The White House has had it up to here with leaks. Trump's administration is so fed up with the amount of information being released — unsanctioned — to the media that White House Press Secretary Sean Spicer has allegedly begun conducting surprise phone checks on his staffers, though he has declined to comment on the claim. In an ironic, but not altogether surprising twist, Spicer's most recent attempt to crackdown on leaks was, well, leaked.

Frustrated that information discussed in a communication staff meeting last week had been leaked to the media, Spicer reportedly went into full-blown jealous lover mode. According to a POLITICO report published on Sunday, the White House press secretary called another meeting with the same staffers. Spicer then allegedly demanded staffers surrender whatever phones and electronic devices they had on them at the time for a random "phone check" reportedly meant to suss out any potential leak culprits. Checks were allegedly done on both staffers' personal and government-issued devices and was overseen by White House lawyers, POLITICO's sources claimed. Bustle has reached out to the White House for comment.

Spicer also reportedly warned those present in the meeting against using encrypted and confidential messaging apps like Confide or Signal, saying their use was a violation of the Presidential Records Act. Spicer's warning likely stems from reports which surfaced earlier this month claiming Republican operatives and White House staffers had begun using Confide, an end-to-end encrypted and screenshot-protected texting app, to communicate more freely.

Although Donald Trump encouraged the leaking of classified documents while on the campaign trail, saying he loved reading WikiLeaks, he's taken a markedly different tone on the matter since being sworn in to office. In a press conference earlier this month Trump said he'd called on the Justice Department to look into the leaks, which he called "criminal." "The spotlight has finally been put on the low-life leakers!" Trump tweeted the day of his press conference. "They will be caught!"

But Trump's warning hasn't appeared to deter those behind the leaks. Moreover, POLITICO's report of Spicer's alleged surprise phone check and anti-leak warning wasn't the first time warnings against leaking information have spurred more leaks. It wasn't too long after Trump's infamous press conference that a State Department memo warning staffers of the dangers of releasing unsanctioned information to the media was immediately leaked to The Washington Post.

Perhaps the problem is that Trump's message on leaks can sometimes be confusing. Earlier this month he claimed the leaks were real while reports of the leaks were "fake news." More recently, after spending much of the week attempting to crack down on leaks within his administration, the president accused the media of making up sources in a speech at Friday's Conservative Political Action Conference. And as The New York Times recently pointed out, Trump used to leak quite a few stories to the press himself.

According to POLITICO, Spicer reportedly issued one last stern warning before adjourning his alleged phone check meeting: Leak news of the phone checks to the media and face "more problems."

More like this
Kim Kardashian & Pete Davidson’s Reported Breakup Has Twitter Running Wild
By Brad Witter
Scotland's First Period Dignity Officer Is... A Man?
By Darshita Goyal
A Political Thriller Inspired By The Munich Massacre Is Coming Soon
By Darshita Goyal
Why Eurovision 2023's Host City Won’t Be Revealed For A While Yet
By Sam Ramsden and Rachel Mantock
Get Even More From Bustle — Sign Up For The Newsletter