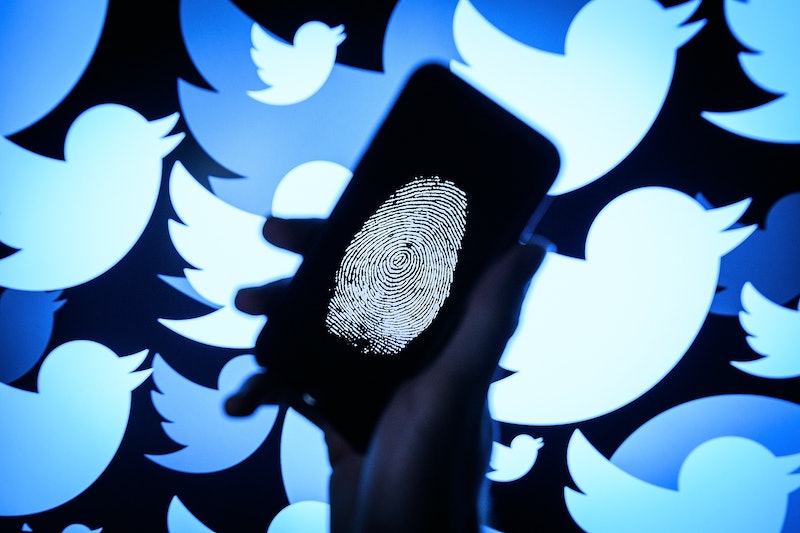 October is finally here. And you know what that means: pumpkin spice lattes, Halloween decorations, and — a new Twitter update? That's right. Your long days of scrolling to find that one Twitter conversation are over. The social media platform announced that it's launched a feature that will make searching for Twitter direct messages on your iPhone a whole lot easier.

Just having launched on Oct. 1, the Twitter DM search feature is still pretty new but totally easy to navigate. Twitter added a DM search bar to the iOS app that allows you to "Search for people or groups" in your messages. Ultimately, it makes it easier to search for conversations with people you might have lost track of (or are just too lazy to scroll down to find). Once you type in the person or groups you're looking for, you'll be shown your most recent message threads with them. If the message thread you're looking for pops up, you just have to click into the chat in the way you regularly would, and you'll be able to read the conversation or reply as you please. If the thread that you're looking for isn't in your recent messages, Twitter will give you the option to "search older messages" under the recent chats that pop up so that you can sift through conversations from years ago to see if you can find the one you're looking for, according to The Verge.

This new search feature has been in the talks since mid-August when Twitter first announced that it would be testing it on iOS to start out. The news came along with a series of announcements from the social media platform that it was working on several other new updates for users, including a filter for your Message Requests, a feature that allows you to change the order of photos you want to Tweet while you're in the middle of constructing a post, and a feature that lets you adjust the list on your home panel. At the time, Twitter mentioned that tests for the new search bar were being conducted for recent DMs only, but since the feature now offers an option to search older messages, it's clear more progress was made.

And while Twitter users are probably really excited to use the latest DM feature (there's been high demand for it in the past, according to The Verge), there are a few things you won't be able to do with it — at least not yet.

For example, the DM search feature only allows you to search for people and groups in your messages. Although this does save you from potentially a lot of scrolling (especially if you're a DM hoarder), it doesn't let you search for keywords or phrases that you might be searching a DM for in the first place. Additionally, it's only being offered to iOS users for now. However, that's not to say it won't be available to Android users in the future.