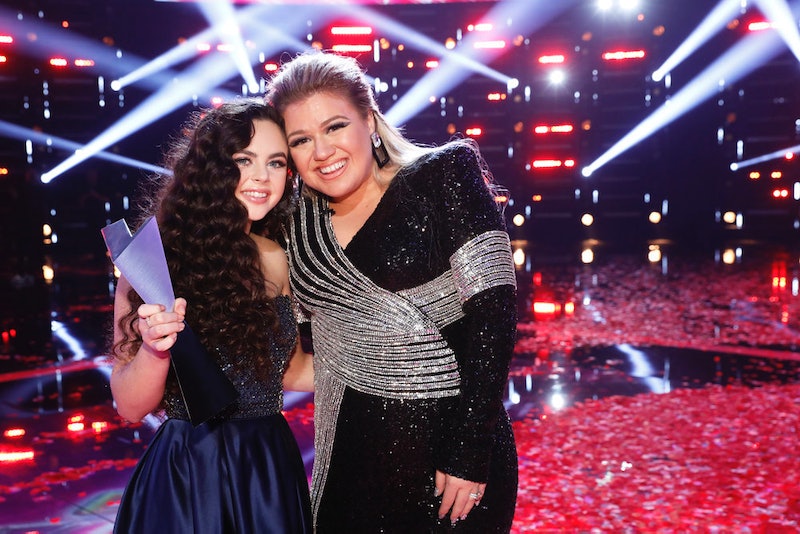 Fifteen-year-old Brynn Cartelli set the record last year for the youngest contestant to claim a victory on NBC's The Voice. After another installment of the talent show, the Season 15 winner of The Voice Chevel Sheperd nearly broke that record again at 16. In a phone interview with Bustle just after the win, Sheperd announces that for her music career, this win is just the beginning. It's one of two consecutive victories for beginner judge Kelly Clarkson, too, who, at this rate, could surpass veteran judge Blake Shelton's six-win record in no time. Being a country singer, you'd think Sheperd would've chose Shelton as her mentor, but she insists that something inside her was telling her to pick the former American Idol winner.

Now that she has claimed the grand prize before her three fellow finalists, Chris Kroeze, Kirk Jay, and Kennedy Holmes, she has bigger fish to fry. And her mentor, Clarkson, is going to help her — beginning with an album. But first, she says she needs to take a moment to regroup, which is pretty understandable, considering her life is about to change immensely.

"I wanna go home and be a regular teenager for a while," she says. "Then I’m gonna start working with Kelly to make an album. And I wanna tour the world and share my passion for country music, and I wanna go to the Grand Ole Opry. I have a lot of aspirations."

She had the privilege of debuting her first single, "Broken Hearts," on the show, a song on which she also collaborated with Kelly and resident writer Shane McAnally. She says it feels surreal to be recognized by others for her music already.

"It’s crazy because that’s the first thing that people know me by," she says. "And so it’s really cool having a song that I love to sing and that I really put hard work into. So did Kelly. So did Shane McAnally, the writer. [Recording it] was super super fun. I got to be creative with the song a little bit. It was super fun being in the studio."

With so much career in front of her, anything could happen. But she says she's certain that she wants her music to stay where her heart is, and that's in the country genre.

"I love country music so so much," she says. "I can sing other genres too, but country music is what I really wanna do because it’s what I love and I grew up with it. I wanna stick to country music."

With that, she hopes to one day have the opportunity to attend, and maybe even receive a nomination at the Country Music Awards. Also on her list of dreams, which she's determined to achieve, is to sing with her biggest inspiration in music, Loretta Lynn. Some might read that as a far-fetched goal, but if she can win a major national talent show before reaching adulthood, nothing is out of reach.