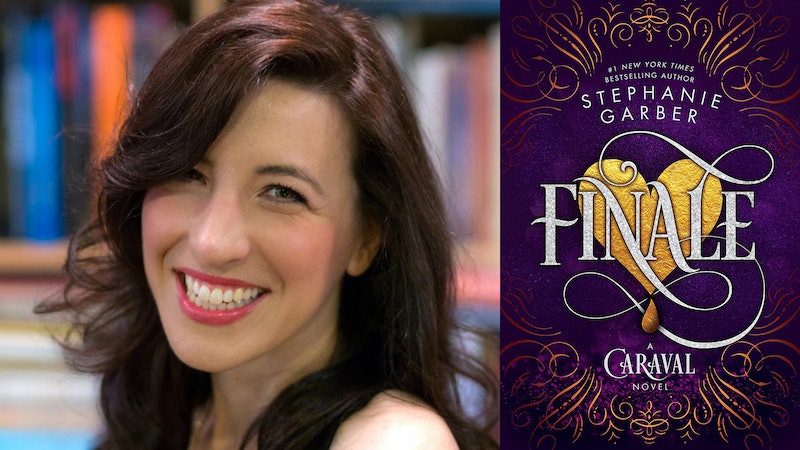 All games must come to an end, but you can be front and center for all the action of Stephanie Garber's thrilling Finale, the last book in her Caraval series. Bustle's got all the info you need for Garber's upcoming book tour, plus an exclusive chapter reveal from Finale, out on May 7, below!

The series follows sisters Scarlett and Tella, who are wrapped up in the magical and dangerous world of Caraval, a carnival-like game with higher stakes than either girl ever imagined. When Finale opens (spoiler ahead!), it’s been two months since the Fates were freed from a deck of cards, two months since Legend claimed the throne for his own, and two months since Tella discovered the boy she fell in love with doesn’t really exist.

With lives, empires, and hearts hanging in the balance, Tella must decide if she’s going to trust Legend or a former enemy. After uncovering a secret that upends her life, Scarlett will need to do the impossible. And Legend has a choice to make that will forever change and define him. Caraval is over, but in this finale, the greatest game of all has just begun.

If you want a ringside seat to Caraval, you're in luck! Stephanie Garber is taking her show on the road one last time to celebrate the release of Finale, and if you're in one of the seven cities below, you're definitely going to want to get in on this. Check out the tour dates and locations below, and find out more info on the World of Caraval website! After you've planned your tour outing, check out the entire first chapter of Finale:

The first time Legend appeared in Tella’s dreams, he looked as if he’d just stepped out of one of the stories people told about him. As Dante, he’d always dressed in shades as black as the rose tattooed on the back of his hand. But tonight, as Legend, he wore a seduction-red double-breasted tailcoat lined in gold, accented by a matching cravat, and his signature top hat.

Shiny locks of black hair peeked out from beneath the brim of the hat, sheltering coal-dark eyes that brightened when he looked at her. His eyes glittered more than the twilit waters surrounding their intimate boat. This was not the flat, cold look he’d given Tella two nights ago, right after he’d rescued her from a deck of cards and then callously abandoned her — leaving her entirely confused and more than a little heartbroken. Tonight he was smiling like a wicked prince, escaped from the stars, ready to spirit her up into the heavens.

"The first time Legend appeared in Tella’s dreams, he looked as if he’d just stepped out of one of the stories people told about him."

Uninvited butterflies took flight in Tella’s stomach. He was still the most beautiful liar she’d ever seen. But Tella wasn’t about to let Legend bewitch her the same way he had during Caraval. She smacked the top hat right off of his pretty head, rocking the tiny vessel beneath them.

He captured the hat with ease, fingers moving so fast she’d have thought he’d anticipated her response if he weren’t sitting across from her, near enough for Tella to see a muscle tic along his smooth jaw-line. The two of them might have been in a dream, where the twinkling sky turned murky purple around the edges as if nightmares lurked close, but Legend was as sharp as precise pen strokes and as vibrant as a freshly cut wound.

“I thought you’d be happier to see me,” he said.

She gave him her most vicious glare. Her hurt from the last time she’d seen him was still too raw to hide. “You walked away — you left me on those steps when I couldn’t even move. Jacks carried me back to the palace.”

Legend’s lips slashed into a frown. “So you’re not going to forgive me for that?”

“You haven’t said that you’re sorry.”

If he had, she would have forgiven him. She wanted to forgive him.

The sky grew darker as writhing purple clouds bisected the crescent moon, severing it into two pieces that floated across the sky like a fractured smile.

“I had somewhere I needed to be,” he said.

Her hopes sank at the coolness in his voice.

Around them the air turned sooty as fireworks burst above their heads, shattering into brilliant glimmers of pomegranate red, reminding her of the fiery display from two nights ago.

Tella glanced up to see the sparks dance into an outline of Elantine’s palace — Legend’s palace now. She actually admired the fact that Legend had convinced Valenda that he was the true heir to the throne of the Meridian Empire. But at the same time, the deception reminded her that Legend’s life was made of games on top of games. Tella didn’t even know if he desired the throne for its power, if he wanted the prestige, or if he merely wished to pull off the greatest performance the empire had ever seen. Maybe she would never know. As Dante, she’d thought she could read him, but as Legend, he felt unknowable.

“You didn’t have to be so cold and cruel about the way you left,” she said.

Legend took a heavy breath and a sudden rush of hungry waves lapped against the boat. The vessel rocked down a narrow canal that fed them into a glowing ocean. “I told you, Tella, I’m not the hero in your story.”

But instead of leaving now, he was leaning closer. The night grew warmer as he looked into her eyes the way she’d wanted him to the last time they’d parted. He smelled of magic and heartbreak, and something about the combination made her think that despite what he claimed, he wanted to be her hero.

"He smelled of magic and heartbreak, and something about the combination made her think that despite what he claimed, he wanted to be her hero."

Or maybe he just wanted her to continue to want him.

Caraval might have been over, but here Tella was, inside of a dream with Legend, floating over waters of stardust and midnight while fireworks continued to fall from the sky as if the heavens wanted to crown him.

Tella tried to turn the fireworks off—this was her dream, after all — but Legend seemed to be the one in control of it. The more she fought against the dream, the more enchanted it became. The air grew sweeter and the colors grew brighter as mermaids with tropical teal braids and pearly pink tails leaped out of the water and waved at Legend before diving back in.

“You are so full of yourself,” she said. “I never asked you to be my hero.”

She and Legend had both made sacrifices two nights ago — she’d doomed herself to captivity inside of a deck of cards, in part to keep him safe, and he’d freed the Fates to rescue her. His actions were the most romantic thing anyone had ever done for her. But Tella wanted more than to be romanced. She wanted the real him.

But she wasn’t even sure if a real Legend existed. And if he did, she doubted he let people close enough to see him.

He’d placed his top hat back on his head and he truly did look handsome, almost achingly so. But he also appeared far more like the idea of Legend than a genuine person, or the Dante she’d known and fallen in love with.

"He’d placed his top hat back on his head and he truly did look handsome, almost achingly so. But he also appeared far more like the idea of Legend than a genuine person, or the Dante she’d known and fallen in love with."

Tella’s heart constricted. She’d never wanted to fall in love with anyone. And in that moment she hated him, for making her feel so many things for him.

A final firework burst into the sky, turning the entire dreamscape the most brilliant shade of blue she’d ever seen. It looked like the color of wishes come true and fantasies made real. And as the fireworks fell, they played music so sweet, sirens would have been jealous.

He was trying to dazzle her. But dazzle was a lot like romance — fantastic while it lasted, but it never lasted long enough. And Tella still wanted more. She didn’t want to become another nameless girl in the many stories told about Legend, a girl who fell for everything he said, just because he leaned across a boat and looked at her with stars dancing in his eyes.

"He was trying to dazzle her. But dazzle was a lot like romance — fantastic while it lasted, but it never lasted long enough."

“I didn’t come here to fight with you.” Legend’s hand lifted, as if he might reach for her, but then his long fingers dipped over the low side of the boat and idly played with the midnight waters. “I wanted to see if you received my note, and ask if you wanted the prize for winning Caraval.”

She pretended to think as she recalled every word of the letter by heart. He’d given her hope he still cared by wishing her happy birthday and offering her the prize. He said he’d be waiting for her to come and collect it. But one thing he’d not said was that he was sorry for any of the ways he’d hurt her.

“I read the message,” Tella said, “but I’m not interested in the prize. I’m done with games.”

He laughed, low and painfully familiar.

“That you’re pretending our games are over.”

Finale by Stephanie Garber comes out May 7, 2019, and is available for pre-order now.