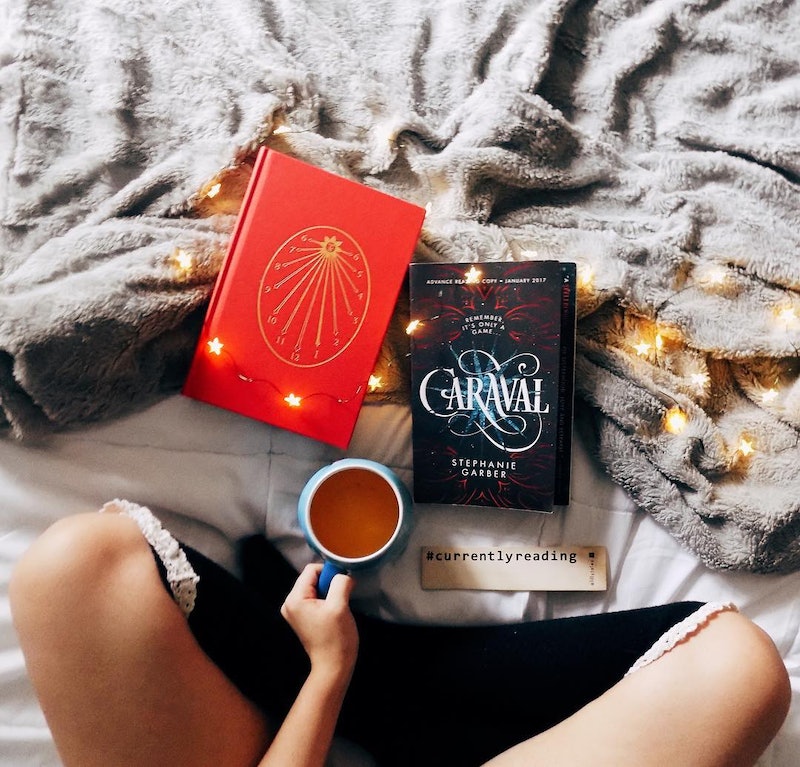 Pack your bags and get ready to go on a fantastical adventure with Stephanie Garber's debut young adult novel, Caraval, out January 31. There might be a lot of other exciting releases hitting the shelves this year, but there are more than a few magical reasons to make sure you put this one on your TBR list.

Set in an unknown time evocative of the 18th or 19th century, Caraval (Jan. 31, Flatiron Books) is the first in what is already shaping up to be a spellbinding series about secrets, freedom, magic, and most importantly, sisterhood.

Scarlett and Donatella live under the tyrannical and often violent rule of their father, an oppressive nobleman who takes pleasure in punishing the sisters by physically harming them for what the other has done. Desperate to escape their abusive lives and even more desperate to save one another, the sisters try unsuccessfully for years to get an invitation to Caraval, a legendary and enchanted circus-like game that could be their only way out. That is, until one day, a personalized letter arrives from Caraval's Master Legend with instructions for both the sisters to set out for the mysterious competition, and despite Scarlett's refusal to go for fear it may impede her upcoming wedding, Donatella forces both of them to flee to the shores of the magical island where the game all begins.

While the book admittedly has an awkward beginning, Caraval quickly finds an exciting pace and a smooth story arch that draws readers into a magical world full of danger, deception, and unwavering sisterly devotion on the part of Scarlett who finds herself caught up in a deadly game that holds her sister Tella's fate in the balance. Aided (and sometimes distracted) by a handsome and mysterious sailor, Scarlett quickly learns that at Caraval, things are never as they seem... but neither was the life she thought she knew back home.

Be prepared to be swept away, because here are five magical reasons you should read Stephanie Garber's Caraval.

1. The setting is pure wonder.

From the beautiful yet dark homeland of Tella and Scarlett to the mysterious private island where Caraval is held, the settings within this book will make you want to pack a back and find these fantastical worlds. Described primarily in terms of Scarlett's experiences, the world of Garber has created in Caraval is bursting with bright colors and unimaginable beauty that tantalizes the senses and stretches the imagination.

When you're forced leave the magical world at the end of the book, you'll start counting down the days until you'll be allowed admittance again.

2. It's a compelling story about sisterly love.

At the core of this magical adventure is a pair of sisters desperate to escape their abusive father's rule. Both sisters will do anything to protect the other, even if it means getting severely beaten themselves. So when the sisters arrive at Caraval and Tella goes missing, it isn't surprising that Scarlett will stop at nothing to rescue her from the deadly game. What is surprising is the risks Tella is willing to take to do exactly the same thing.

Every bit of danger, every risk, every potentially fatal situation these young women put themselves in is for one reason, and one reason only: the love of her sister.

3. There's plenty of romance, too.

Aside from the familial love between Tella and Scarlett, there's a healthy dose of romantic love, too. Without spoiling the story, I'll tell you that there are several love triangles, forbidden kisses, and more than one broken heart.

If love stories are your thing in YA, don't worry, there's plenty of heart-thumping moments in Caraval to keep you turning the pages. If they're not, don't fret — romance isn't the sole focus here.

4. The book's many mysterious secrets will keep you turning the pages.

Like the mysterious circus itself, Caraval is filled with unexplained magic, family secrets, and unsolved mysteries. What is at the heart of Caraval's power and who is the enchanted circus's creator? Who is Scarlett's fiance, really? Is anyone, especially Julian, who they say they are? What happened the Tella and Scarlett's mother all those years ago, and will the girls ever discover the truth?

As you read about Scarlett's adventure to save her sister from the grips of Caraval, you'll also find yourself frantically turning the pages to get to the bottom of some of these tantalizing mysteries.

5. Its ending will leave you wanting more.

While it's not a nail biting cliffhanger, Caraval's ending certainly sets readers up for its sequel, a book they will anxiously await. Neatly wrapping up the events of the book, Caraval lays the groundwork for an exciting follow-up that will (readers hope) will dive deeper into the origins of Caraval, the life of Master Legend, and the true story behind Tella and Scarlett's mother's disappearance.