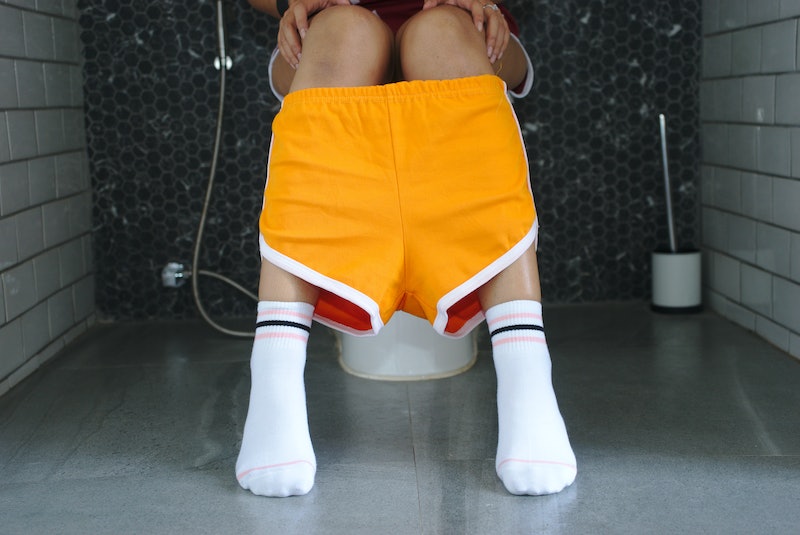 While many people worldwide experience gut health issues, there's still a lot we don't know about gut illnesses and how to diagnose them. Research has highlighted the links between the gut and health, but there's still a lot to learn. Now, a medical startup and a probiotics company is hoping to train artificial intelligence to understand more about the bowel and gut health — by encouraging the public to send them anonymous pictures of their poop.

The relationship between poop and gut health is a complex one, and the people behind the campaign are hoping to contribute data that will help us understand it. Seed, a start-up that conducts research on the microbiome's effects on health and sells a daily "synbiotic" supplement, and auggi, a digital health coach created by a coalition of engineers from MIT, Cornell, and Harvard, have combined to create the campaign #GiveAShit. They encourage everybody to, well, give a shit — and then send them the results, anonymously. Photographs of feces worldwide will be fed into their health AI to build its "poop database." They're hoping the pictures will help the AI make more accurate diagnoses of gut problems based on visuals in the future.

"Building the world’s first (and largest) crowdsourced poop image database will allow us to train an AI to learn the difference between healthy and unhealthy poop, automate symptom tracking and analysis, and help inform the future of gut health research and patient care," Ara Katz, the co-founder and co-CEO of Seed, tells Bustle.

"The #giveashit citizen science campaign is critical to gather this database and train the stool characterization AI," David Hachuel, co-founder and CEO of auggi, tells Bustle. "We aim to create a new standard in how gut symptoms are being monitored and that's why we are making the technology open to the academic research community." The campaign also hopes to change the conversation around gut health, and stop the stigma that exists around gut conditions.

In terms of protecting your health information, the form where users can input their photos doesn't ask for your name or any identifying information, though the site does collect cookies. Katz tells Bustle, "When auggi gets the photo, it is stripped of all metadata and decoupled from the email; it's HIPAA compliant. While we hope you’ll be proud to tell the world that you contributed to science, no one needs to know if you don’t want them to."

It may seem like a very awkward way to deal with gut problems, but poop can tell us a lot about our gut health, because of its relationship to the gut microbiome, or the collection of bacteria and cells living in the human gut and bowels that helps us digest and deal with waste. The microbiome is a hugely important part of human health, and fecal matter is a good way to see how healthy it is. A study in 2016 in Gut found that the composition of poop, including its consistency, was a good guide to the microbiota living in women's guts, and how diverse they were. More diversity means a healthier gut, and more consistent poop.

Insight into the microbiome, via fecal samples and other methods of research, may be the key to understanding gut health in the future, experts tell Bustle. "Research into the gut microbiome in recent years has identified crucial roles that certain bacteria or communities of bacteria play in various gut issues," Dr. Ruairi Robertson, a microbiologist at Queen Mary University of London who is not involved with the campaign, tells Bustle. "Links have been uncovered between the gut microbiome and many chronic gut diseases from irritable bowel syndrome to colon cancer. However, effective gut microbiome therapies are still relatively sparse."

Researchers are increasingly realizing that there's not a one-size-fits-all gut microbiome; everybody has a different one. A study in 2019 published in Cell Health & Microbe, for instance, found that the same foods can impact the microbiomes of separate people in different ways. "There is growing realization that the gut microbiome is extremely personalized," Dr. Robertson says. "The future of gut microbiome research will probably rely on understanding this personalization, which will require huge amounts of data from individuals, machine learning, and even AI."

Right now, the #GiveAShit campaign allows people to analyze their own photographs against a chart that points to different characteristics for different poop types, including constipation and a lack of fiber. In the future, AIs like this might be able to tell us much more detailed information about our guts through small amounts of evidence. "This personalized approach could help prevent and treat many gut diseases," Dr. Robertson tells Bustle — but there's a long way to go.

To contribute, upload a photo of your BMs anonymously to seed.com/poop, and help an AI diagnose gut disorders — one poop at a time.