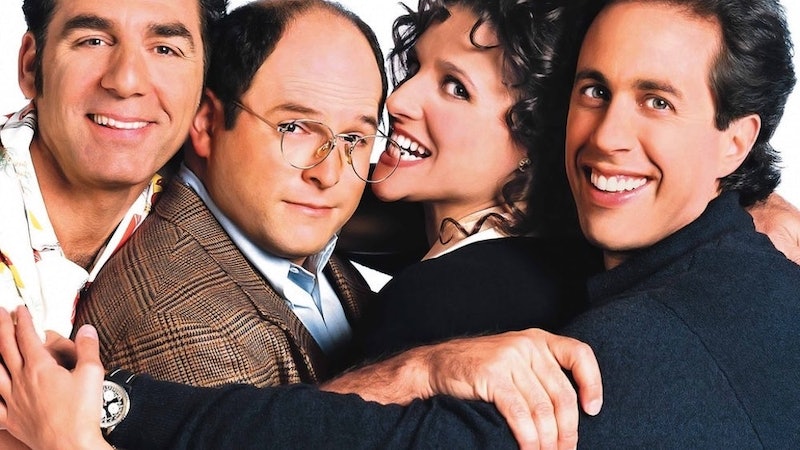 Netflix is losing two of its biggest sitcoms over the course of the next two years: Friends is moving to WarnerMedia's HBO Max in 2020, while The Office will shift over to Comcast's streaming platform in 2021. However, the streaming giant is already gearing up to be the master of a new comedy's domain. That's right, folks — Seinfeld is coming to Netflix in 2021, according to the Los Angeles Times, as part of a new five-year deal with Sony. This means that all 180 episodes of the beloved sitcom will be at your fingertips in just a few years' time — not that there's anything wrong with that.

Until that joyous day comes, though, there is still a way to getting your daily dose of hijinks and slap-stick humor that only Seinfeld can provide. At this time, the series is available to stream on Hulu, but only on a domestic-level. So if you're currently outside of the United States, you're out of luck for the time being. Thankfully, this upcoming deal between Netflix and Sony will exist on a much larger scale (no amount of shrinkage involved), giving the streamer global rights to the franchise.

“Seinfeld is a one-of-a-kind, iconic, culture-defining show,” Sony Pictures Television Chairman Mike Hopkins said in a statement to the Los Angeles Times announcing the news. “Now, 30 years after its premiere, Seinfeld remains center stage. We’re thrilled to be partnering with Netflix to bring this beloved series to current fans and new audiences around the globe.”

Netflix chief content officer Ted Sarandos added his own thoughts on the matter, praising the comedy and welcoming it to the streaming site. "Seinfeld is the television comedy that all television comedy is measured against. It is as fresh and funny as ever, and will be available to the world in 4K for the first time," he said. "We can’t wait to welcome Jerry, Elaine, George and Kramer to their new global home on Netflix."

This won't be the only Jerry Seinfeld creation to find a home on Netflix. The comedian's other works currently available on the platform include his original series Comedians in Cars Getting Coffee as well as his stand-up special Jerry Before Seinfeld.

But as beloved of a show as Seinfeld has come to be, there's no denying that the passage of time will make some of the show's once-popular jokes feel outdated and even offensive. Many shows have fallen under similar scrutiny, like the portrayal of "Fat Monica" on Friends. Granted, that's always the risk you run when you watch anything that was created 30 years ago, but it can still feel a bit jarring nonetheless. Luckily, TV shows, like society itself, have come a long way since then, but the show still has some truly comical moments that could make a rewatch more than worth the effort — something that Netflix subscribers will be able to do in no time at all.

It won't be able to completely fill the void Friends and The Office are sure to leave behind, but it certainly helps. So get ready to yada-yada-yada your way through some laughs.

More like this
The First Trailer For 'That '90s Show' Includes So Many Nods To The Original Series
By Jack Irvin, Alyssa Lapid and Grace Wehniainen
'Bridgerton' S3 Teases Exciting Social Season For Penelope Featherington
By Bustle
The 'Kenan & Kel' Reunion On 'SNL' Took A Dramatic Turn, Thanks To Keke Palmer
By Brad Witter
How The Thanksgiving Episode Of 'Gossip Girl' Changed Pop Culture History
By Gabrielle Bondi
Get Even More From Bustle — Sign Up For The Newsletter