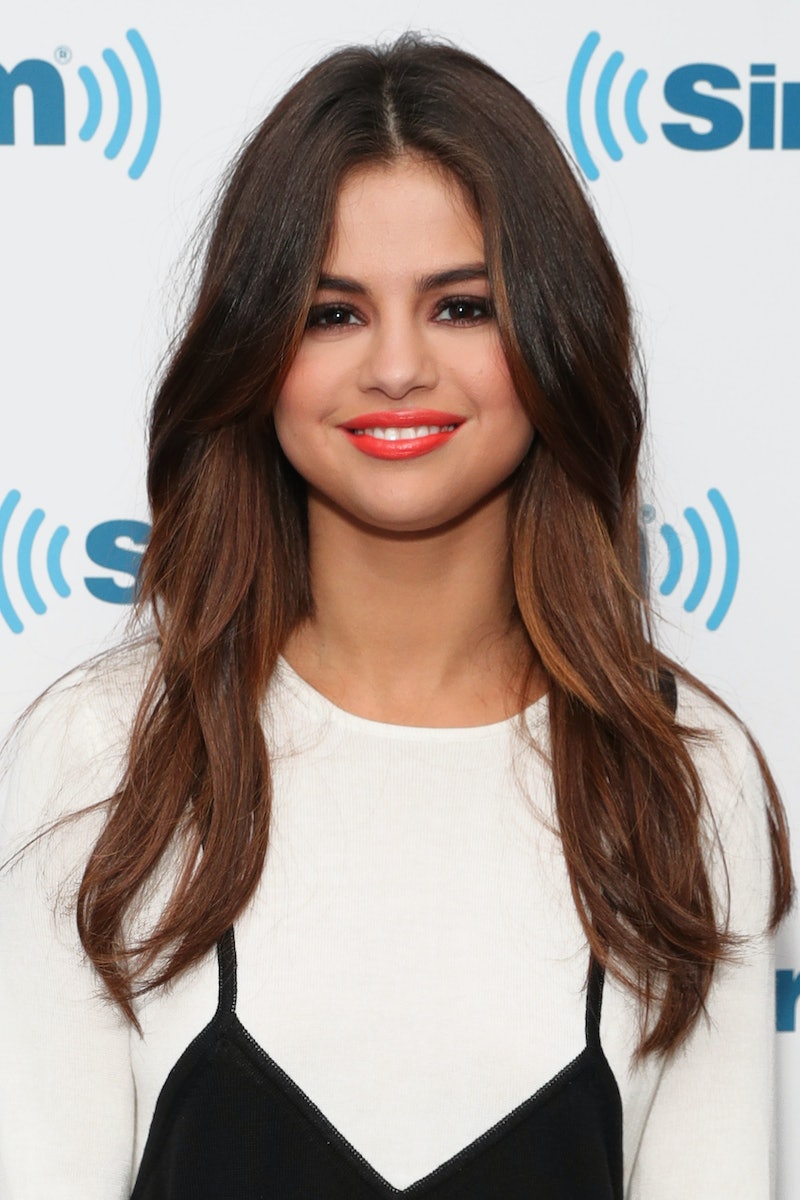 Although her next album hasn't been officially announced just yet, lately, Selena Gomez has been killing it with her singles. It's impossible to turn on the radio without hearing "Bad Liar," and now, she's sending off another catchy song into the world. On Wednesday night, Gomez dropped "Fetish," her latest single featuring Gucci Mane, and it's definitely a continuation of that different sound she's been talking about. Gomez's "Fetish" lyrics are all about confidence, and the song is a perfect way for her to continue her transition into this new era of her music.

Overall, the lyrics of "Fetish" are pretty simple and repetitive, but even so, it's pretty clear that this is almost a total role reversal for her. In "Bad Liar," Gomez sang about how she had a crush (in the music video, it was on her gym teacher), but in "Fetish," she is the crush — and it doesn't come as a shock to her that she'd be the object of someone's fantasies.

Of course, this has been old news to Gomez's fans, because what's not to love about the 24-year-old actor and singer? But hearing Gomez proclaim that if she were you, she'd "do me, too," makes this a powerful anthem for anyone who's feeling themselves.

The first verse sets the tone for the entire song:

Take it or leave it

Baby take it or leave it

But I know you won't leave it

'Cause I know that you need it

Look in the mirror

When I look in the mirror

Baby I see it clearer

Why you wanna be nearer

Maybe the person she's singing about is threatening to leave, but Gomez isn't concerned — who would leave her when her reflection looks that good?

Then, in the pre-chorus and chorus, which are repeated three times throughout the song, Gomez admits that while she totally understands why the object of her affection would be a little addicted to her, even when "I push you out," they come running right back.

You got a fetish for my love

I push you out and you come right back

Don't see a point in blaming you

Of course whoever she's singing about has a fetish for her love. This is Selena Gomez, guys.

Then, she launches into the second verse:

Say you're reaching your limit

Going over your limit

But I know you can't quit it

Got you hooked on my body

Take you over and under and twisted up like origami

Like origami, y'all. This is getting serious. But as Gomez sings herself, even if they reach their limit, they still can't quit it.

Then, in Gucci Mane's featured verse, he's rapping from the opposite perspective: the person Gomez has been singing about.

I blame you 'cause it's all your fault

Ya playin' hard, don't turn me off

Ya acting hard, but I know you soft

You my fetish, I'm so with it

All these rumors bein' spreaded

Cause they sayin' we already did it

Just need you in a blue bikini

Mane's admitting that Gomez is totally right, and he's addicted to her... but also admitting that she's not quite as tough on the outside as she seems. Oh, and she can call him up anytime for a diamond as clear as a bottle of water. Um, jealous?

The song ends with one more repeat of the chorus to drive the point home — it doesn't matter what Mane is rapping about, because as far as Gomez is concerned, she's got him wrapped around her finger. She's that good.

Whether you need a pick me up or just want to celebrate your own self confidence, "Fetish" is the perfect song to listen to if you want to feel like you can take on the world. Now, all we need is for Gomez to release a full album, because if her singles are any indication, it may be her best yet.

More like this
Selena Gomez Is Fine Being Single, But She Still Manifested Romance On 'SNL'
By Martha Sorren, Jake Viswanath and Jack Irvin
Who Is Betty Who Dating? The Australian Singer Is Married To Her Tour Photographer
By Radhika Menon
Cardi B’s New Single “Hot Shit” Features Kanye
By Alyssa Lapid
You Might Want To Rewatch 'Elvis' For This Britney Spears Easter Egg
By Grace Wehniainen
Get Even More From Bustle — Sign Up For The Newsletter