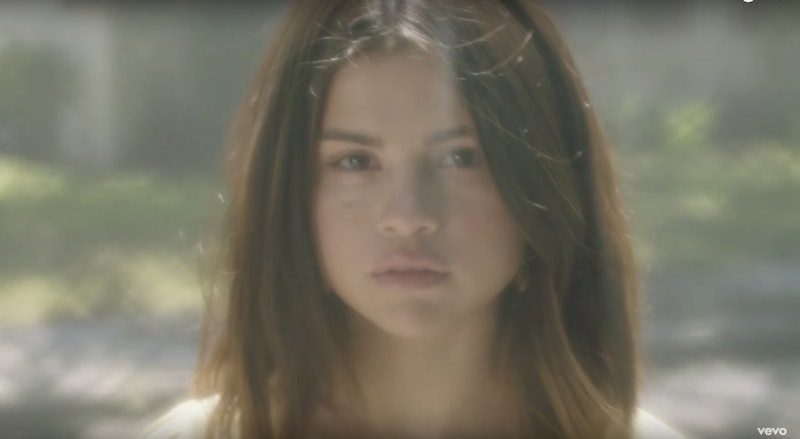 OK everyone, try to remain calm here, because the video for Selena Gomez's "Bad Liar" just dropped, and I think the jaws on every person watching just dropped too. Featuring a dreamy '70s throwback vibe, the video serves up some next-level retro kitsch, made even cooler by the fact that Gomez plays four different roles. My head is truly spinning from the whole thing. But as if that wasn't enough excitement for one video, something by the name of "Fetish" is teased at the end of the "Bad Liar" video. And it's accompanied by some visuals of Gomez that are noticeably styled differently than the rest of the footage. A title card tells us that it's coming soon, but not what "Fetish" actually is at the end of the "Bad Liar" video. And guys, I just have to know. I have to.

It seems sensible at this point to assume that "Fetish" may be the name of the singer's new album, or that it may be the title of Gomez' next single from it. Or, considering how wonderfully stylized "Bad Liar" is, "Fetish" could be a visual album that pulls together a collection of songs and music videos to tell a story. (Bustle reached out to Gomez's rep for comment, but did not receive an immediate response.) However, if rumors on Twitter are to be believed, then "Fetish" may be Gomez's next single featuring Gucci Mane. This is already making my head explode with all the possibilities of what treats such a potential collaboration could yield.

If that does turn out to be true, then it'd certainly fit with comments that Gomez made regarding her next single, earlier in June. In an interview on Elvis Duran and the Morning Show, Gomez talked about how she's always wanted her "music to be an evolution," and commented, "the second single is even more surprising than 'Bad Liar.'" And should "Fetish" be the title of Gomez' second single, as rumors are suggesting, then the dark, mysterious, and deviant implications of the song's name would certainly point to a dramatic shift in tone from "Bad Liar." That could result in a music video of an equal wow-factor, but exploring much darker themes.

What's interesting is that this is also exactly what the video seems to suggest, changing tone right at the very end to surprise viewers with that "Coming Soon" title card and some hazy, sun streaked visuals. While the video for "Bad Liar" embodies a portrayal of '70s culture that's bold and colorful — like that of fun, throwback programs like That '70s Show — the visuals that accompany the teasing of "Fetish" are distinctly similar to some scenes from Sofia Coppola's The Virgin Suicides. A movie that was also set in that era, but that was definitely melancholic and thoughtful, rather than anything close to what could be considered fun.

This suggests, at least to me, that "Fetish" could definitely be a dark and brooding follow-up single to the catchy, pop perfection of "Bad Liar." But until the goddess Gomez confirms any rumors, or follows up on the tease of her newest music video, I guess we're all just going to have to wait and speculate wildly over it all.