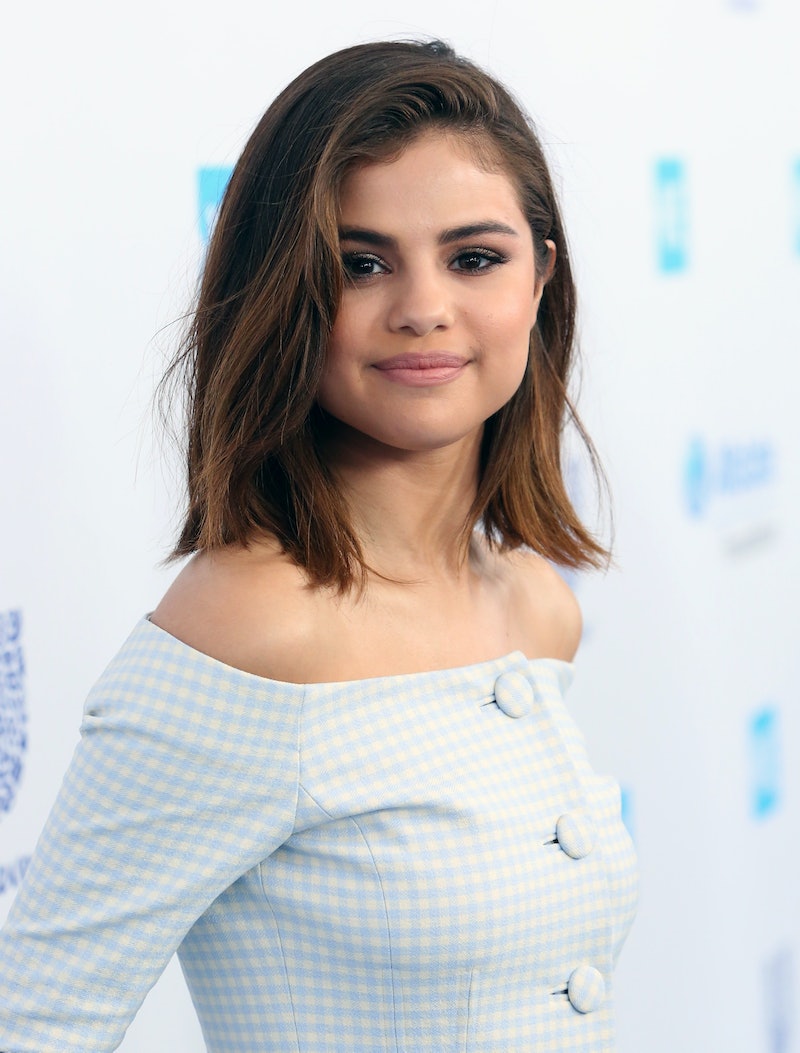 The 2017 MTV Video Music Awards are here, and one star is celebrating in serious style. Selena Gomez's new bob was debuted on Aug. 25, thanks to a snap of the look on Instagram shared by her makeup artist just two days ahead of her scheduled appearance at the VMAs.

Gomez is nominated for two awards this year: Best Electronic Dance Video for "It Ain't Me" and Best Collaboration for "We Don't Talk Anymore," with Charlie Puth. In the snap, she paired her new femme fatale 'do with bright red lipstick and square, chunky earrings in a style that has a throwback, '80s quality.

While the photo is plenty intriguing on its own, making fans wonder what Gomez will bring to the VMAs, the MUA who Instagrammed the shot, Hung Vanngo, added some intrigue by hashtagging it #notsosecretproject. Whether the hashtag refers to Vanngo styling Gomez or to something else, that still remains to be seen.

Either way, Gomez's new look is exactly the kind of chic fans have come to expect from her. She hasn't shared anything on her own social media about prepping for the VMAs, but if the daring new cut is anything to go by, she'll make a mark with her red carpet ensemble.

Gomez has a storied history with award shows, not least of all the VMAs. Her 2017 noms are the first she's had since her single 2015 nomination for "Good for You." In 2013, she was nominated for two awards, and won Best Pop Video for "Come & Get It"; 2017 is the first year since 2013 that she's been nominated for two separate awards.

While she hasn't won every award she's been nominated for, Gomez has brought it every year when it came to her red carpet style. Take a look at some of her past awards show 'dos (and outfits!) below.

Her recent look isn't the only time she's gone for a slicked-back look, which isn't a surprise — it's fantastic on her.

Everything about this outfit is to die for, and her hair totally matches the chic-grunge look.

No matter what look Gomez brings to the VMAs, it's clear she'll be dressed to impress.