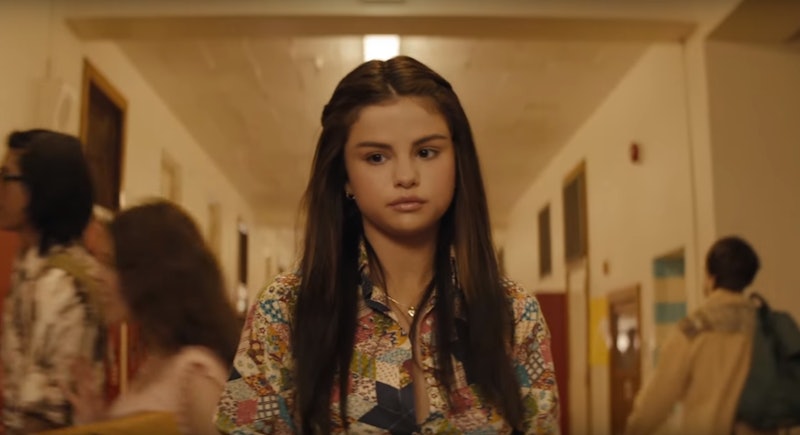 The most complicated plot of the summer doesn't come from a blockbuster, it comes from a music video. The mind-boggling love triangle (quadrangle?) featured in Selena Gomez's "Bad Liar" video has captured the imagination of her fans, and now the '70s-themed story has yet another twist. According to Billboard, the "Bad Liar" video took inspiration from Dazed and Confused, a '90s classic about the last day of school for a group of students in 1976.

While an argument could be made that the film and the video feature similar themes, the big takeaway was the clothes. It's the costumes the characters played by Matthew McConaughey, Milla Jovovich, and the rest of the cast wore that informed Gomez's many looks. You see, Dazed and Confused and "Bad Liar" have one important thing in common — costume designer Kari Perkins. In an interview with Billboard, Perkins revealed the video's director, Jesse Peretz, was already using photos from the film as reference points for "Bad Liar" before he called her.

Once she was on board, Perkins brought more than her keen sense of style to the project, she brought some of her own closet. She said,

"I have a stock of great true vintage '70s, 80's clothing that I've collected over the years. I rented some from local costume houses, and we also made some things too, like the basketball team outfits. We created the wolves shirts for the team. That was fun."

You totally want to raid her wardrobe now, don't you?

If you've ever seen Dazed and Confused, you'll remember how distinctive the film looked. Despite being filmed in the '90s, it captured the freedom of the final day of school for a group of '70s teens flawlessly. Like Gomez's video, the movie transports you to a different place in time, and commits fully to its period setting.

While there are no direct parallels between the plots, young love is key in both stories. Gomez's high school character falls for her father's mistress, and even though there's nothing quite so salacious in the film, Dazed and Confused certainly has its share of romantic drama. Both stories nail what it's like to be young, and they prove that feeling transcends time.

If you've never seen the '90s classic, then you can thank Gomez for giving you the perfect excuse to check it out.