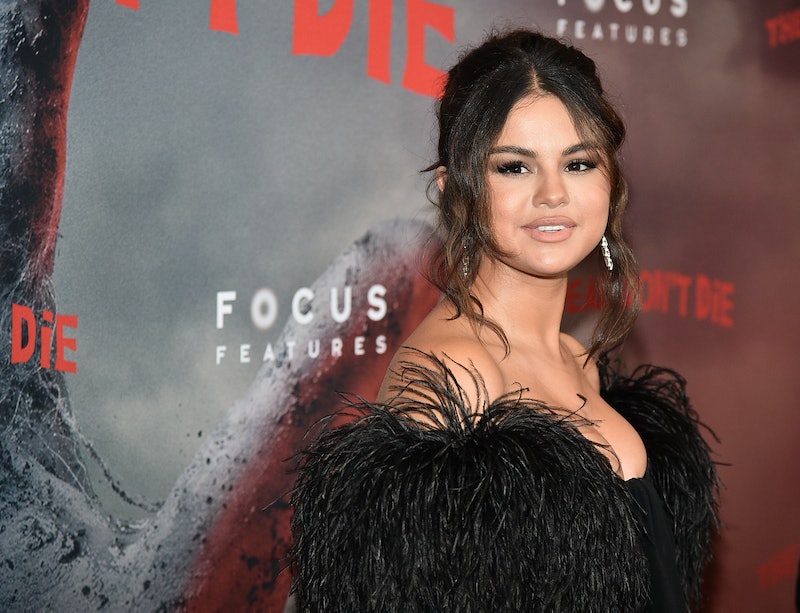 For those of you who are starting to feel like you're not getting enough Selena Gomez music in your life, well, you're in luck. Because it turns out that the 26-year-old singer has a special treat in mind for fans that she's eager to share. While attending the premiere of her new film, The Dead Don’t Die, Selena Gomez revealed that she's completed new music, though she made a point of keeping most of the details about her latest project under wraps — at least for the time being.

“Yes!” she exclaimed during an interview with Entertainment Tonight when asked about her new music on the red carpet. “Yes! It’s finally done.” And while that was pretty much the intent of what she was willing to share — fans still don't know when this new music will be released or anything about the songs in general — however, the news of its completion doesn't come as much of a surprise, given all of the teasers she's posted on Instagram of her time in the recording studio. “This week, next week and every week,” she captioned a video back in February, showcasing that she was hard at work on something very special for fans.

On top of that, she also posted a selfie on Instagram back in May, which she captioned, “Studio diva." So to say that she's been busy would be an understatement. And now that the songs are completed, it's only a matter of time before she's ready to share them with the rest of the world.

Before that time comes, though, Gomez has a lot of other great things in the works, including starring alongside Bill Murray in her new dark comedy film The Dead Don't Die, which is set to hit theaters on Friday, June 14. The story centers around a group of cops portrayed by Murray, Chloe Sevigny, and Adam Driver, who do what they can to fight off zombies that have plagued their small town. Meanwhile, Gomez plays the role of a hipster named Zoe and from the sound of it, she had a great time on set and getting to work with Murray.

“It was iconic being able to work with Bill Murray and just on top of it, his personality,” Gomez told ET about the experience. “He has no idea who I am! And, he refuses to call me Selena. He basically calls me Gomez, so it's actually the best — it's the best part of working with him!” Not to mention that the former Ghostbusters star knows how to have a good time both on and off screen. Gomez recalled one memory in particular that will stay with her forever: “He actually literally stole the cop car in one scene and just took everyone on a joy ride. He does that."

Needless to say, between the new music and new movie, Gomez has a lot of great things going on in her life right now. And even though it could still be a while before anyone hears these news songs of hers, odds are it'll be well worth the wait.

More like this
How Ghosts Inspired Kesha's New Music
By Jake Viswanath
Stormzy Made A Passionate Speech About The Importance Of Diversity
By El Hunt
Beyoncé’s Special Tribute To Sister Solange Was Both Touching & Hilarious
By Stephanie Topacio Long
Is Dua Lipa Dating Trevor Noah? New Photos Show Them Kissing & Hugging
By Brian Anthony Hernandez and Martha Sorren
Get Even More From Bustle — Sign Up For The Newsletter