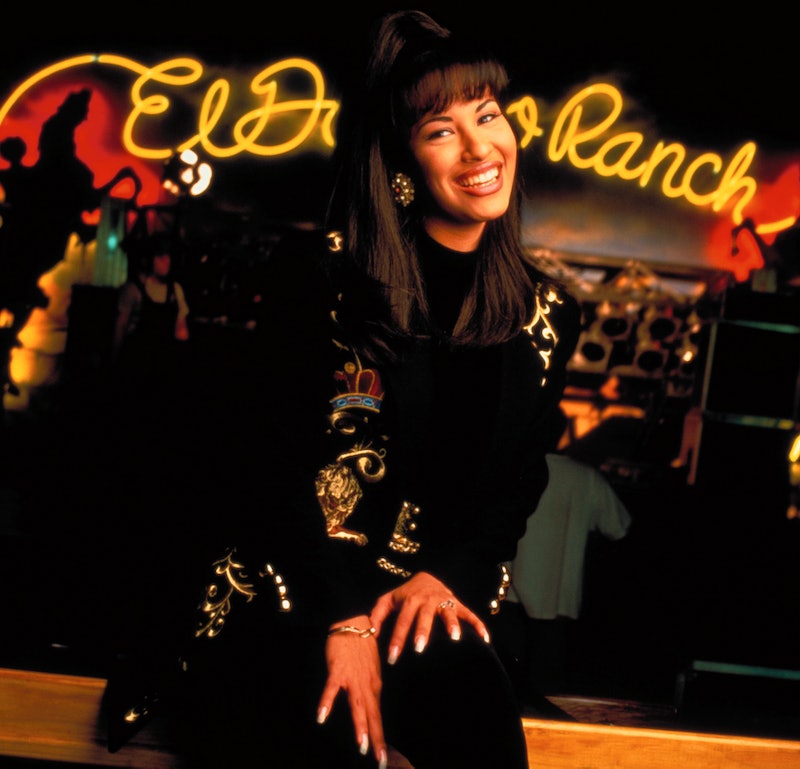 The Queen of Tejano, Selena Quintanilla, is about to be memorialized onscreen once again, this time on Netflix's new series about her life, with Christian Serratos in the leading role. But not everyone is totally onboard with it. Selena Quintanilla's husband said Netflix did not consult him for their new series on the late Latin music icon, and some of her fans are now coming to his defense.

On Saturday, April 4, Quintanilla's widow Chris Pérez posted a photo on Instagram of Jesse Posey, the actor playing him on Selena: The Series, claiming that he was not consulted on any part of the casting or creative process. "Here is a pic I just saw of the actor playing me in the Netflix series," he wrote. "For the record, never met him, haven't seen the script, and I have NO idea what is going on. But, I'd love to find out."

Pérez seems to be the only family member that's not part of the show. Netflix's Selena: The Series is being made in collaboration with her family, with the late singer's sister Suzette Quintanilla and their father Abraham Quintanilla Jr. serving as executive producers. But for fans of Selena, Pérez's non-involvement may not come as a shock. His relationship with her family has been strained from the start, with Abraham initially disapproving of their romance before he and Selena eloped in 1992.

Their relationship improved after the marriage and her untimely death. But in 2016, Abraham sued Pérez over a potential TV adaptation of his book To Selena, With Love, which the widower wrote about his time with Quintanilla, claiming that it would violate Abraham's rights to any entertainment properties as it pertains to his daughter. Regardless, many fans have left comments on Selena: The Series' Instagram page, asking why Pérez had not been involved in the show.

Neither Netflix nor Posey has yet to respond to Pérez's claims. But on Wednesday, April 1, to mark the 25th anniversary of Quintanilla's death, Posey paid tribute to the singer on Instagram. "Selena's personal life has made an impact on how I perceive mine," he wrote. "Her love for her family, husband, fans, and her other passions, was one of a kind. She made her fans feel special and people knew her interactions with them were genuine. She was born an icon but always remained humble."

The first part of Selena: The Series will debut on Netflix sometime in 2020, so perhaps there's still a little time for this drama to be sorted out.

More like this
Netflix Reveals First Look At Wednesday In The 'Addams Family' Spinoff Series
By Bustle Editors
Devi Is Going To Meet A “Smoldering Bad Boy” In ‘Never Have I Ever’ Season 4
By Jack Irvin and Gabrielle Bondi
Nicola Coughlan Shared A Lady Whistledown Excerpt From ‘Bridgerton’ Season 3
By Grace Wehniainen, Alyssa Lapid and Sam Ramsden
A New 'And Just Like That' Table Read Pic Confirms A Key Character's Return
By Jack Irvin and Grace Wehniainen
Get Even More From Bustle — Sign Up For The Newsletter